You surprized me again with your pictures and compositions
But first of all it must be said I symphatize with the underdogs: the Dutch!

Already the very first picture is great because it is so close. Great work of light, coming from the top/back of the figurines, it creates nice and realistic shades thus enabling you to show your figurines straight in the face.

The scene inside Gemioncourt: like a fine dollhouse but a nasty dramatic scenario. I would like to see what it looked like as a 'making of': was this charming blue wall part of the battlefield or just a separate setup. But we can look through the windows outside, so its not just a flat set.

My favorites are two compositions showing the Dutch staff and their troops in the fields, Bois de Bossu in the background and same French troops in the far distance: very good framing. You have developed a real talent for composing dramatic mass compositions.

Thank you for your kind comments.

With your knowledge and interest in photography it is especially appreciated.

The interior set is a seperate unit utilising Der Feldmarschalls baking tray allowing a background to be constructed as you look through the windows.

Bennoes has a work in progress feature.

Incidentally, there is also a fascinating link to how Kubrick filmed his scenes in Barry Lyndon. The use of a NASA camera used to film in candlelight is genius.

Also, Thomas Mischak introduced me to this. Brilliant!

See you on Saturday.

French 9th Infantry Division, Lieutenant-general Maximillien-Sebastion Foy commanding has captured the Ferme de Gemincourt and is advancing towards the crossroads led by Marechal Ney himself.

French 5th Infantry Division, Lieutenant-general Baron Gilbert-Desiree Bachelu is approaching the Gemicourt stream in support. The advance is slow due to the difficult terrain. 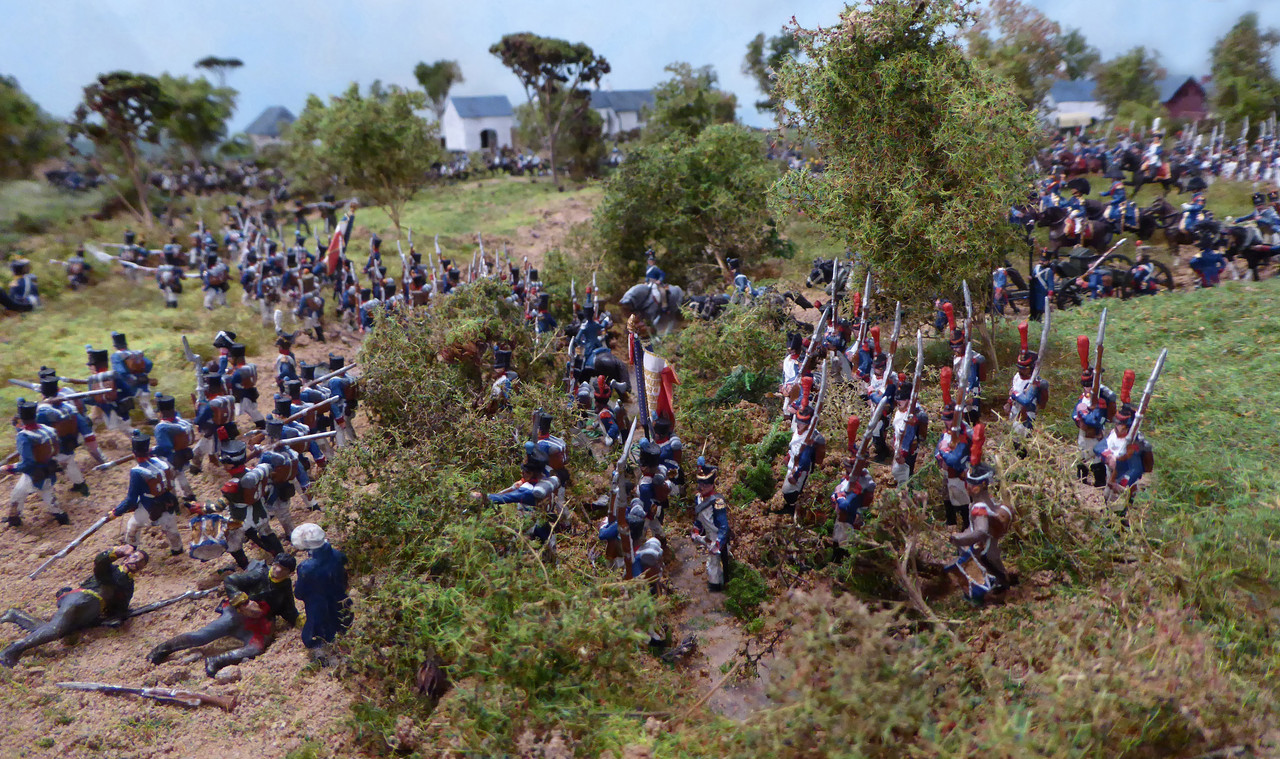 Nevertheless the Dutch Belgians have been pushed back across the Gemincourt stream. 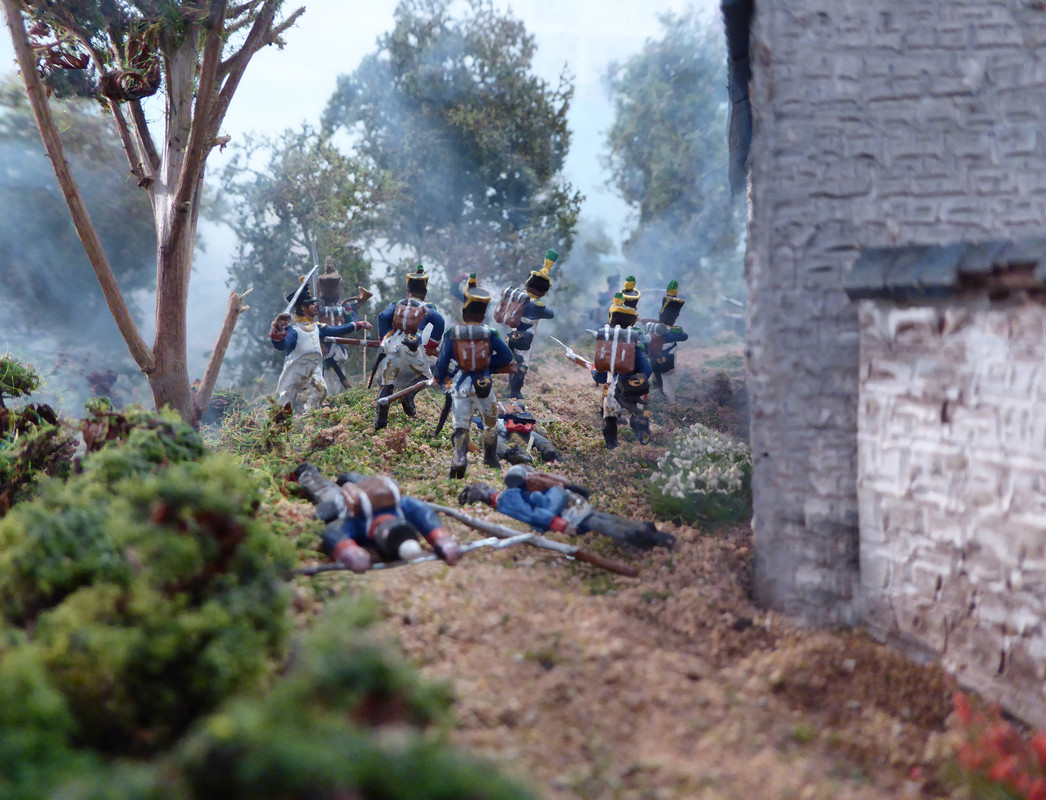 However the Dutch, Lieutenant-Colonel Jan Westernburg commanding have formed square in time and repulse the attack. 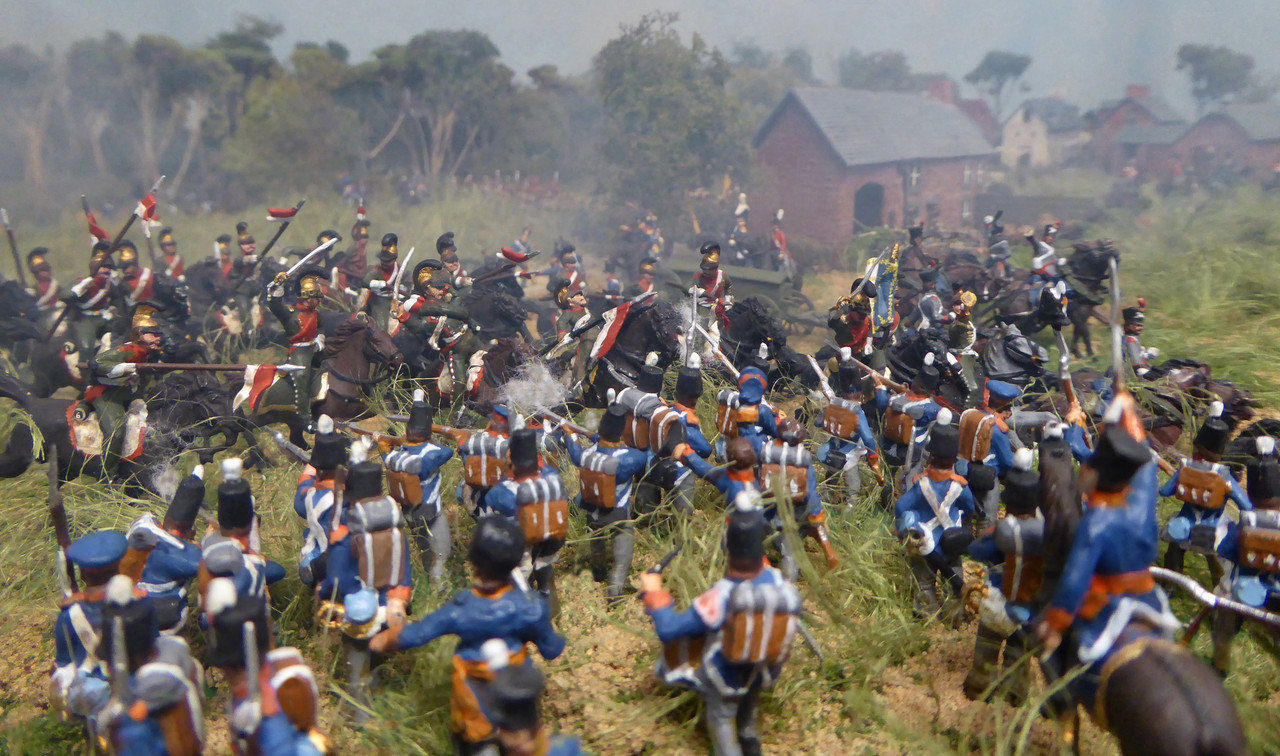 Contemporaneously, 2nd Legere, Colonel Pierre-Antoine Husson along with 1st Cavalry Brigade, Baron Pierre-Francois Huber have outflanked the Dutch Belgian line of defence and are now advancing down the Namur-Nivelles road towards the crossroads. 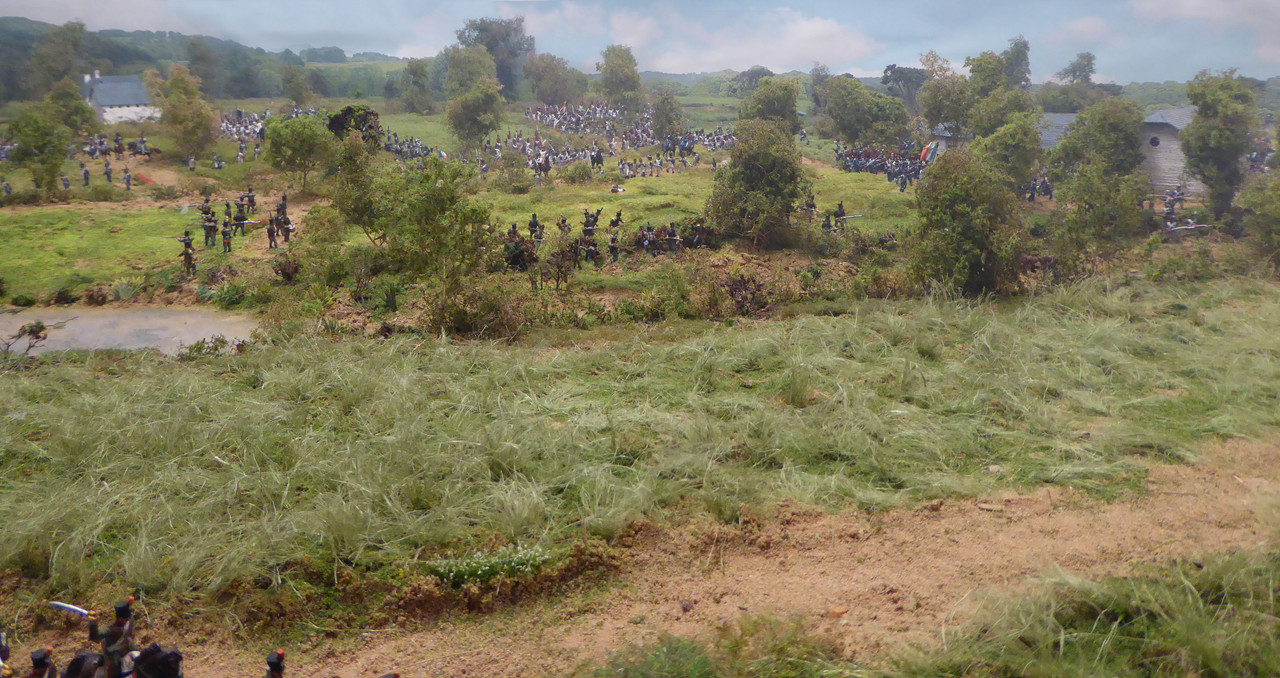 In the absence of his Grace The Duke of Wellington, Lieutenant-General Sir Thomas Picton directs the deployment of the British 9th Infantry Brigade, Major-General Sir Dennis Pack commanding. 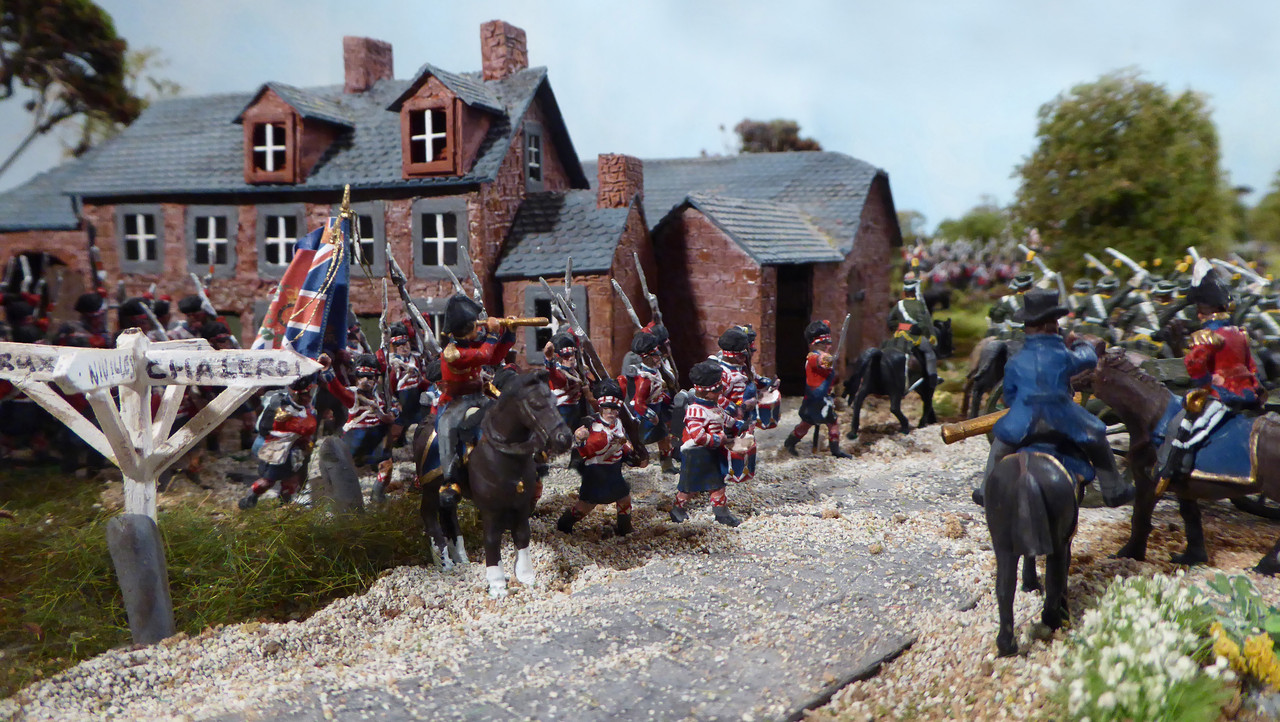 Some much needed artillery support arrives in the shape of Brevet Major Thomas Rogers and his No.2 Company Royal Artillery.

Ney is in his element, L'empereur recompensera celui qui s'avancera!

WOW! The pictures are fantastic!!

I see what Wolfgang means by showing us his favorite image. This picture comes nearest to a real eyewitness in a very realistic scenery.
There are even some white flowers at the side of the hollow road.
A great detail is the road sign directing into 4 directions, all of its signs supported by an extra piece of wood making it a complex construction on its own. Only the first 'R' in Charleroi seems to have vanished through the years. That name comes from Charle Roi or Charl le Roi meaning Charles the King or maybe you did this on purpose to make the text shorter.
Anyhow, some nice compositions again, among them the overview with lots of troops peeping behind and between the vegetation. And the compositions with Scottish in the foreground and the Crossroad buildings in the background.

Mr Cryns you have done it again but you are very kind.

Yes, what a mistake!

I can not believe I have missed the ' bloody' R off after so much effort.

I shall have to shoot myself in order to restore honour!

The council will be sending a man with a paint brush straight away.

The French Divisional and Corps artillery, having re-deployed by Ferme Gemioncourt. display their professionalism by subjecting the Allied troops to a devastatingly effective bombardment. 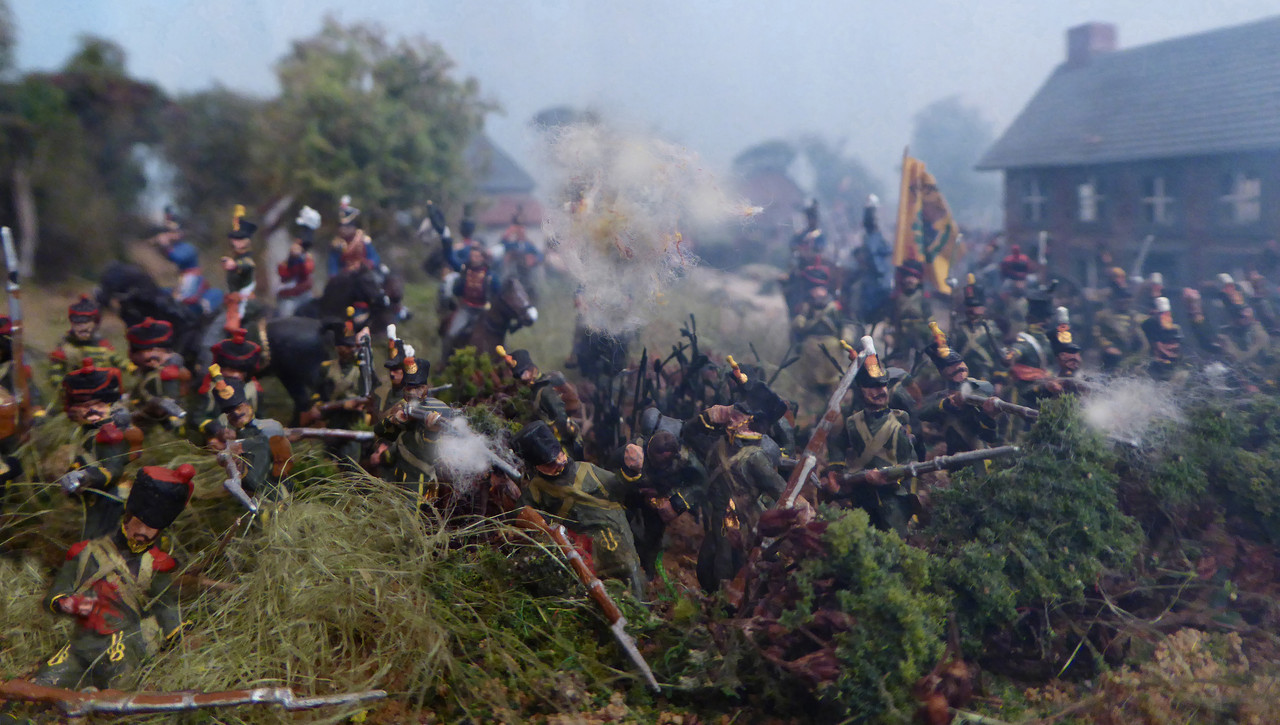 5th Dutch Militia., Lieutenant-Colonel Jan Westernburg commanding are pinned by French lancers in square and are being subjected to a lethal tiralleurade from voltigeurs in the Gemioncourt stream. 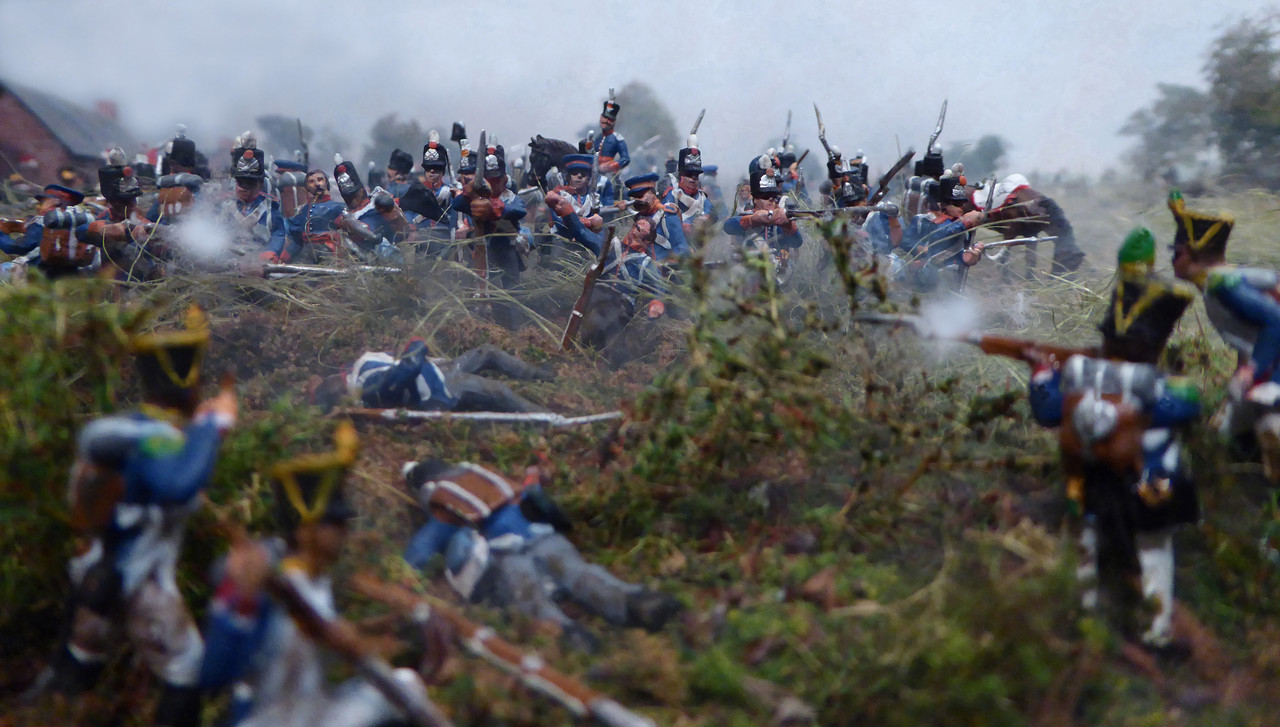 His Grace, The Duke of Wellington has returned from his unexpected detour and is now back in command. 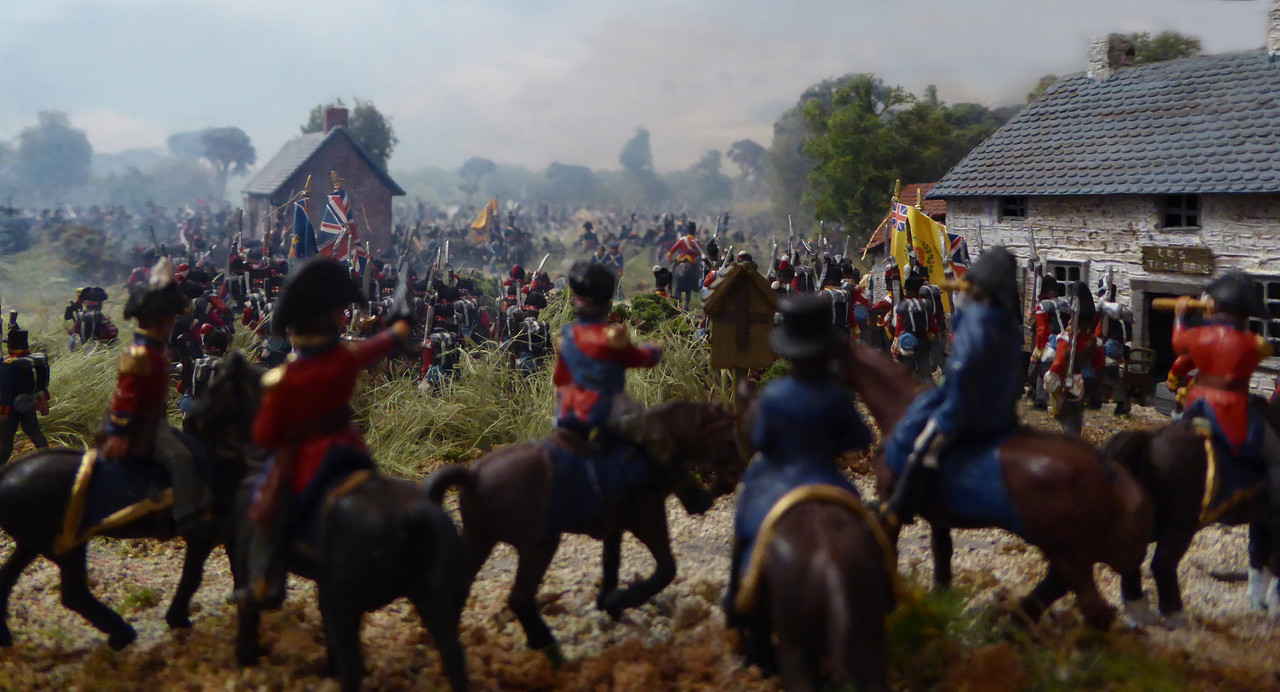 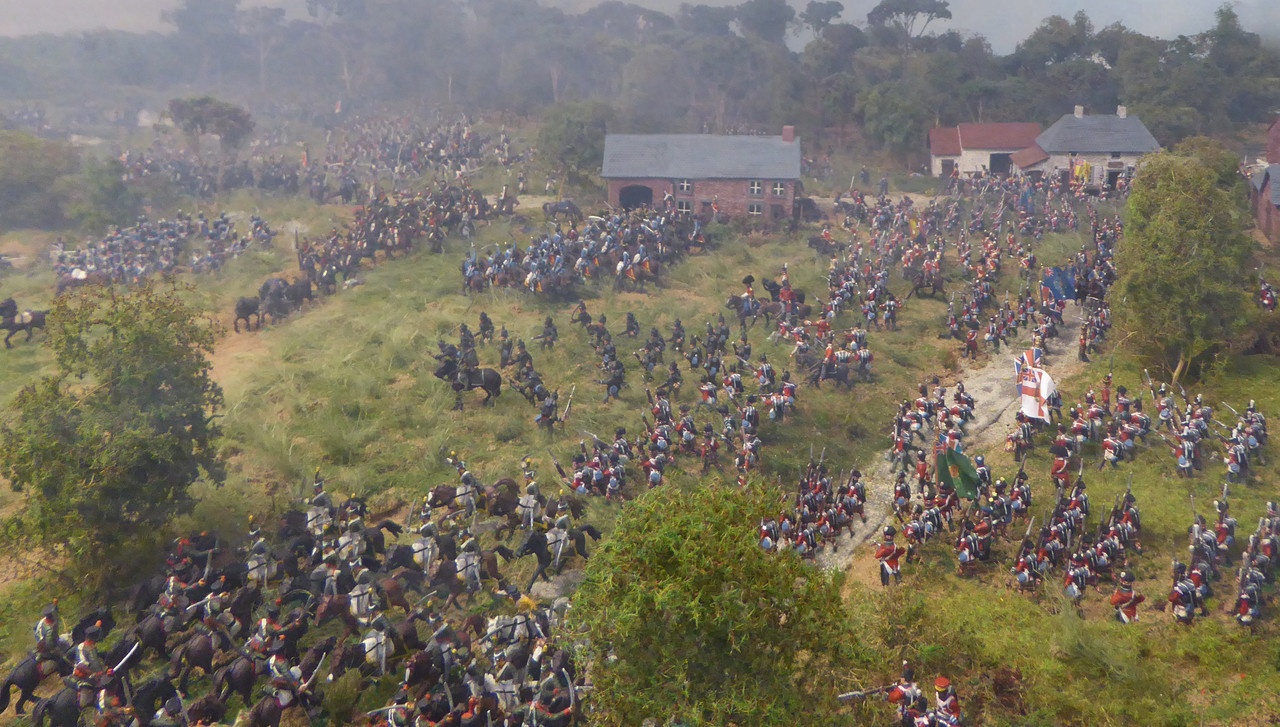 Their colleagues from the 5th Belgian light dragoons, Lieutenant-Colonel Edouard de Merx are simultaneously engaging the French 1st Chasseurs a cheval under the command of Colonel Pierre Joseph Simonneau. 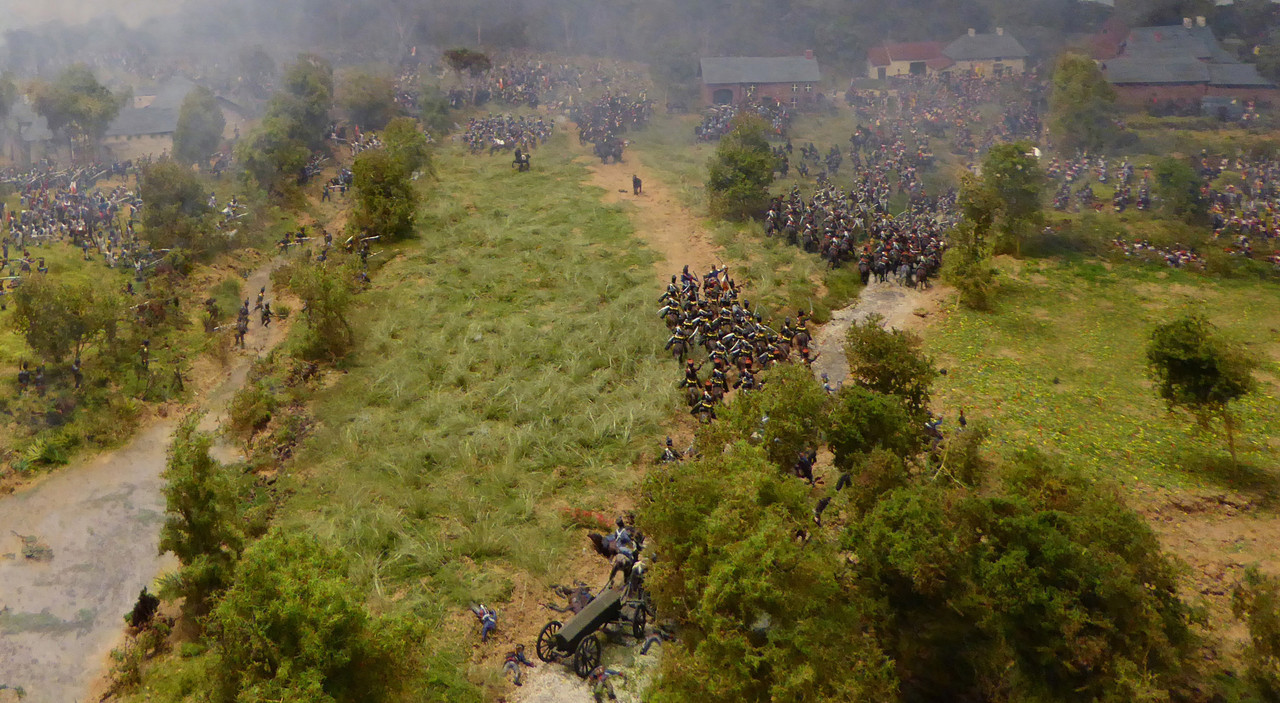 Meanwhile in the Bois de Bossau the French 1st Legere, Colonel Amedee-Louis Cubieres commanding is heavily engaged by the Gemioncourt stream. This Nassau line of resistance is currently the last obstacle to the French advance through the wood. 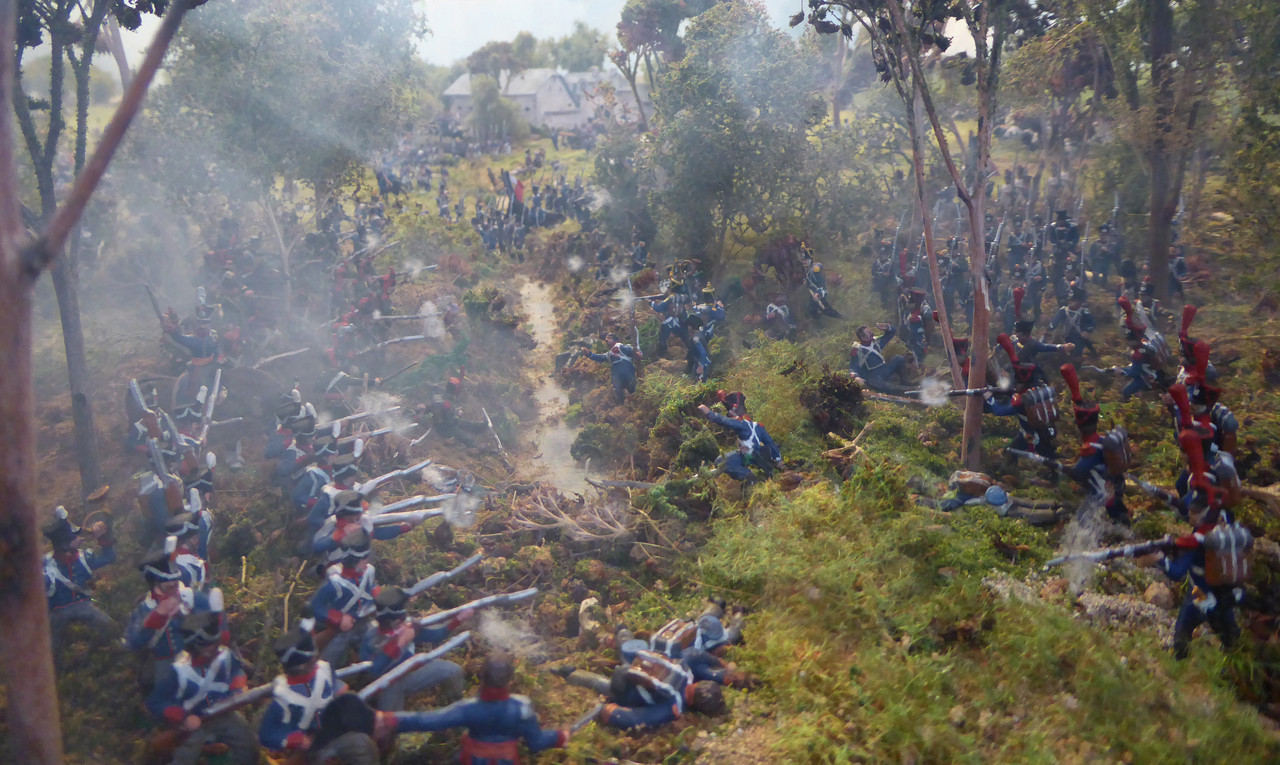 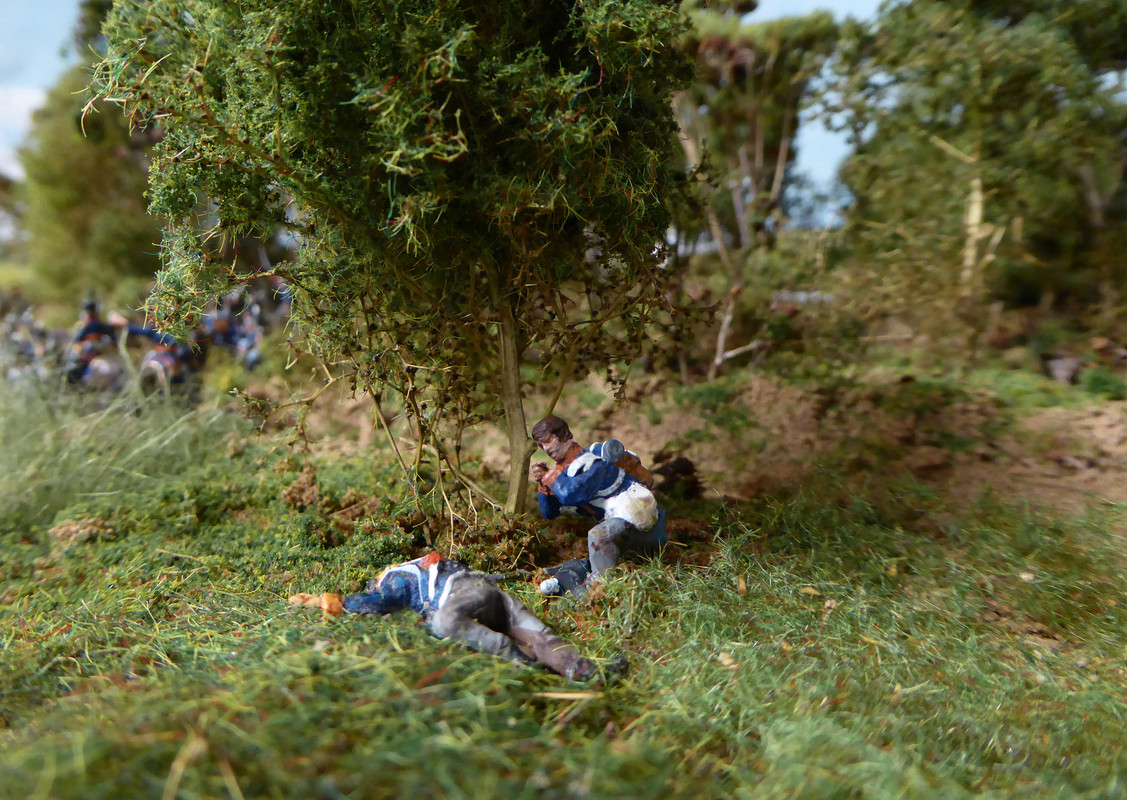 The Anglo Dutch force is now seriously threatened but welcome reinforcements in the form of the Brunswick Corps, General Fredrich Wilhelm, Duke of Brunswick commanding, are fast approaching Quatre Bras. 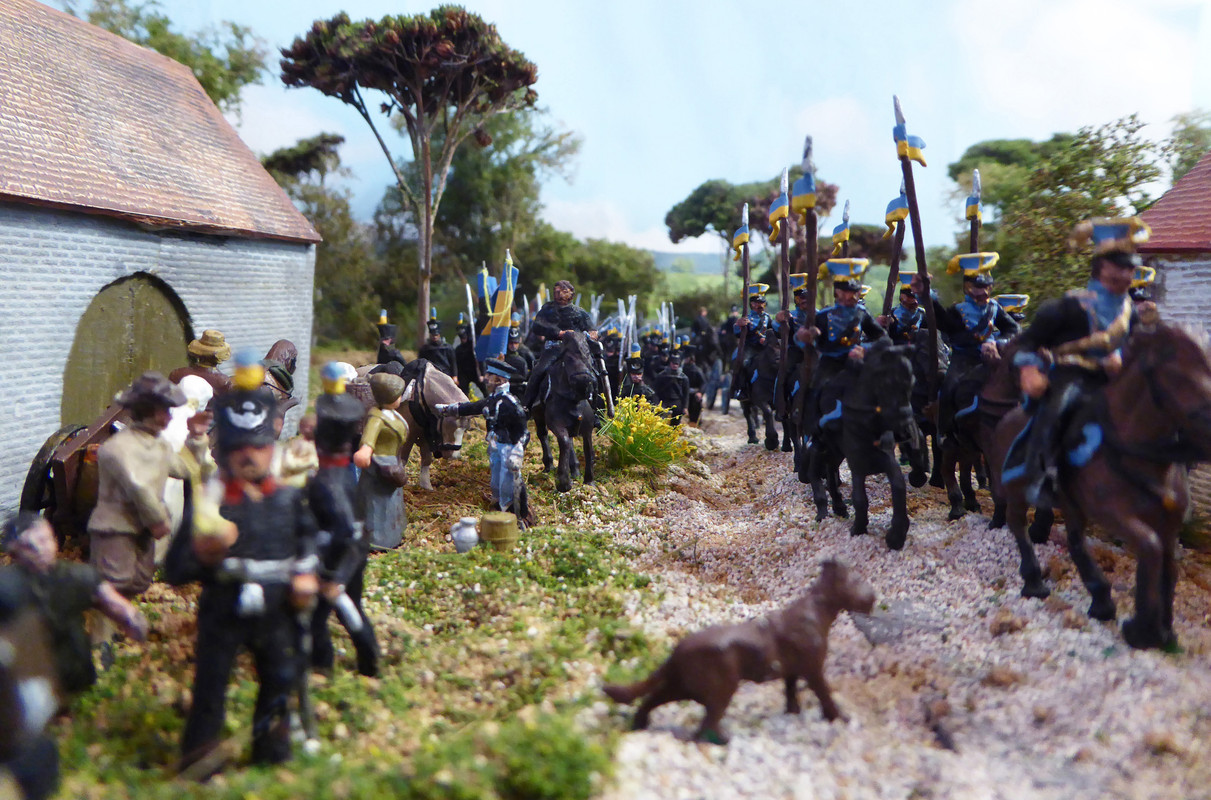 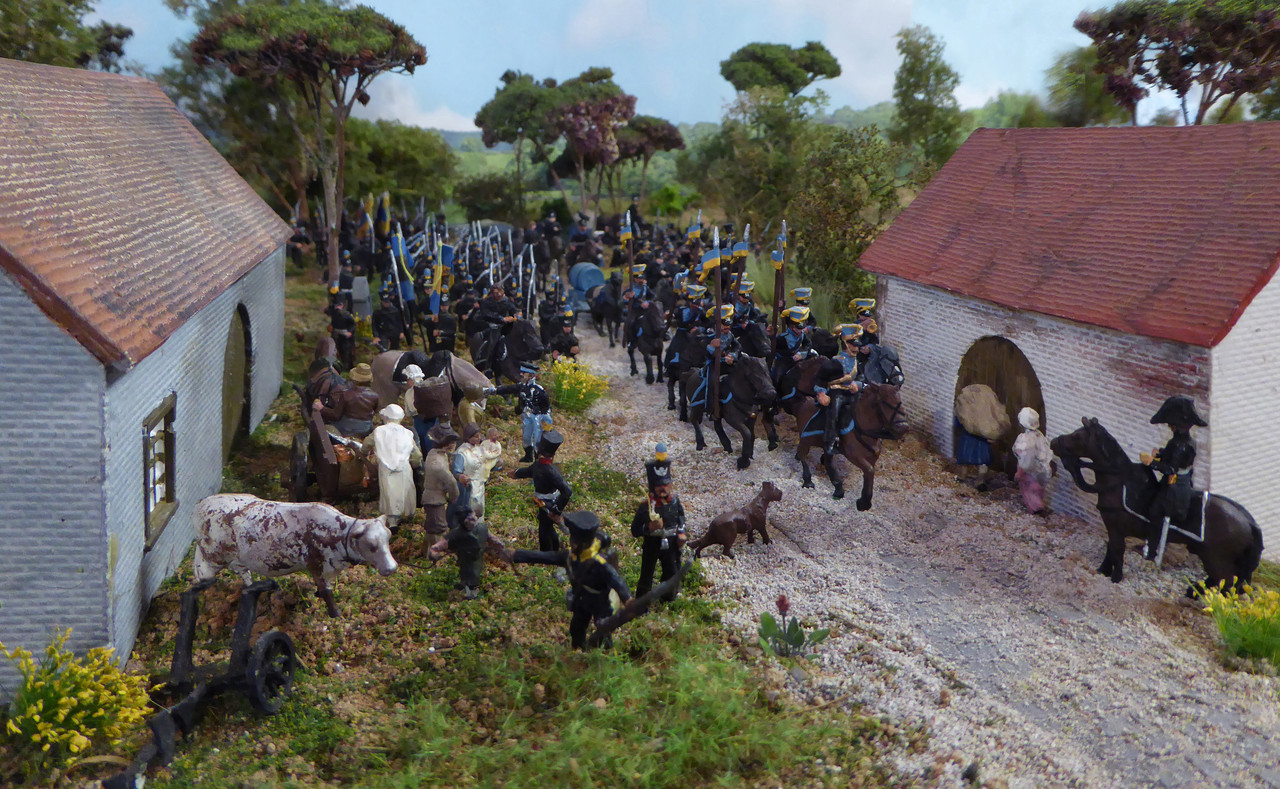 The sands of time are running out, but for whom?
Nach oben

Dear Chris my compliments to your epic work again.
Great explosions and nice topview in Bois du Bossu.
It must be my chauvinism but its fascinating to see so many Dutch men again.
Especially I like the bleu color of the Dutch hussars, there is enough grey in the blue coats to make it look realistic and distinguishing from all other uniforms.
Regards,
Cryns
KATALOG https://crynsminiaturen.nl/
Nach oben 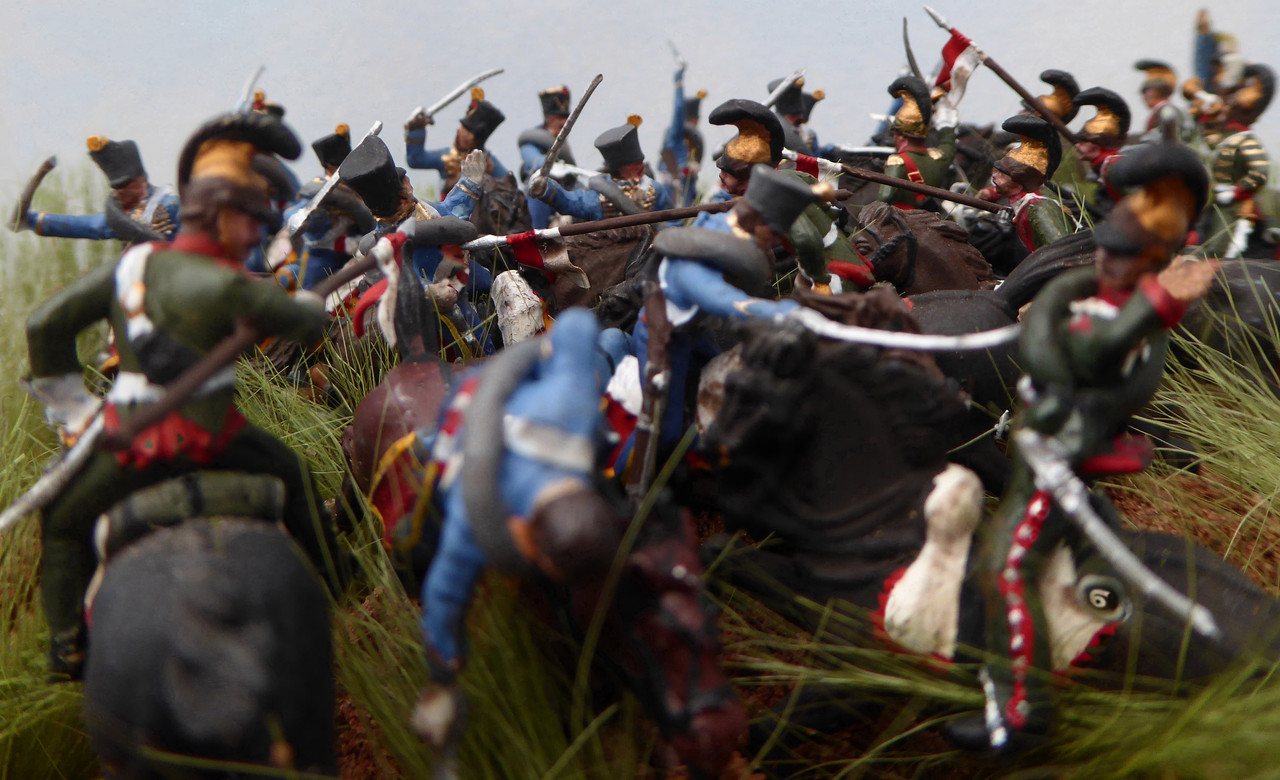 The French 1st Brigade, Marechall de camp Baron Jean-Joseph Gauthier is now engaged in a fire fight with the Nassau infantry by the Ferme de la Bergerie. Marshall Ney, the bravest of the brave leads by example.

His Majesty's 79th Regiment of foot, the Cameron highlanders, have formed square in order to repel an unformed attack by chasseurs a cheval from the 6th Regiment, led by Colonel Paul-Eugene de Faudouas.

The French flanking attack down the Namur Nivelles road continues with the support of the 2nd French cavalry's Divisions horse artillery. 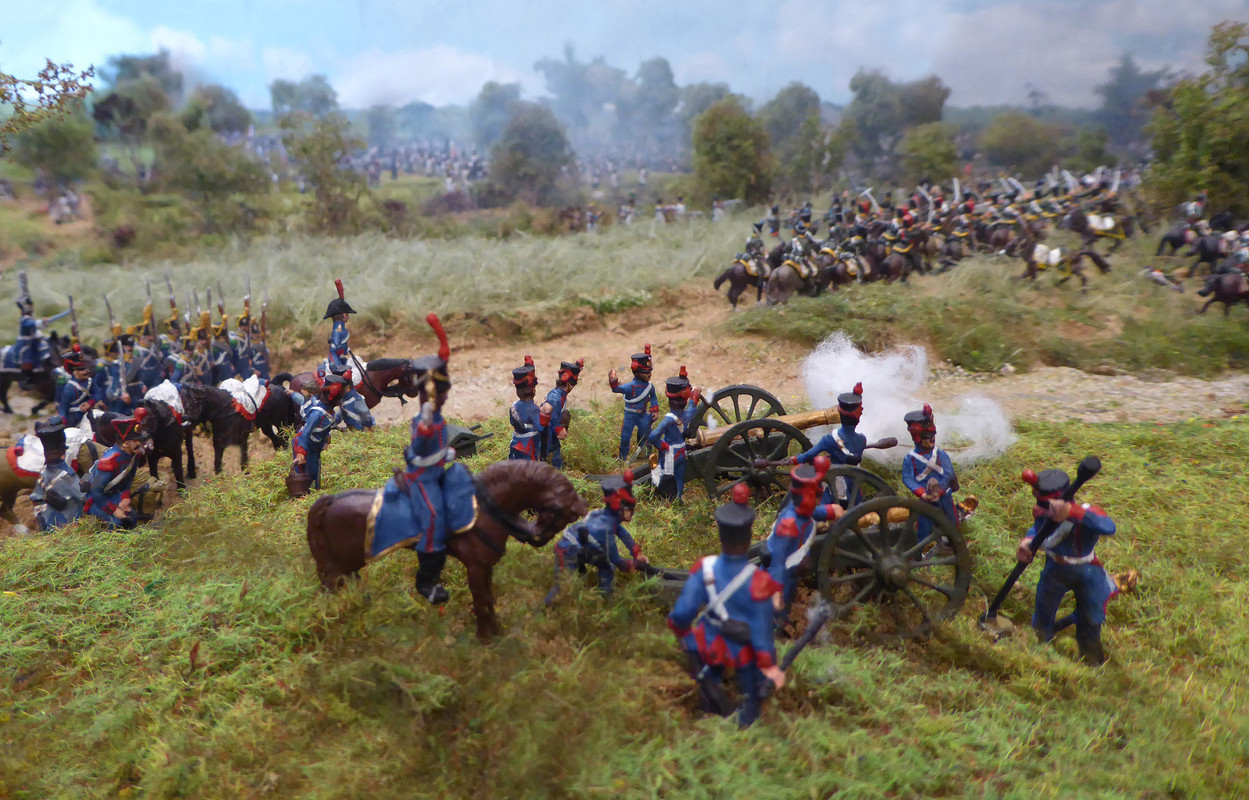 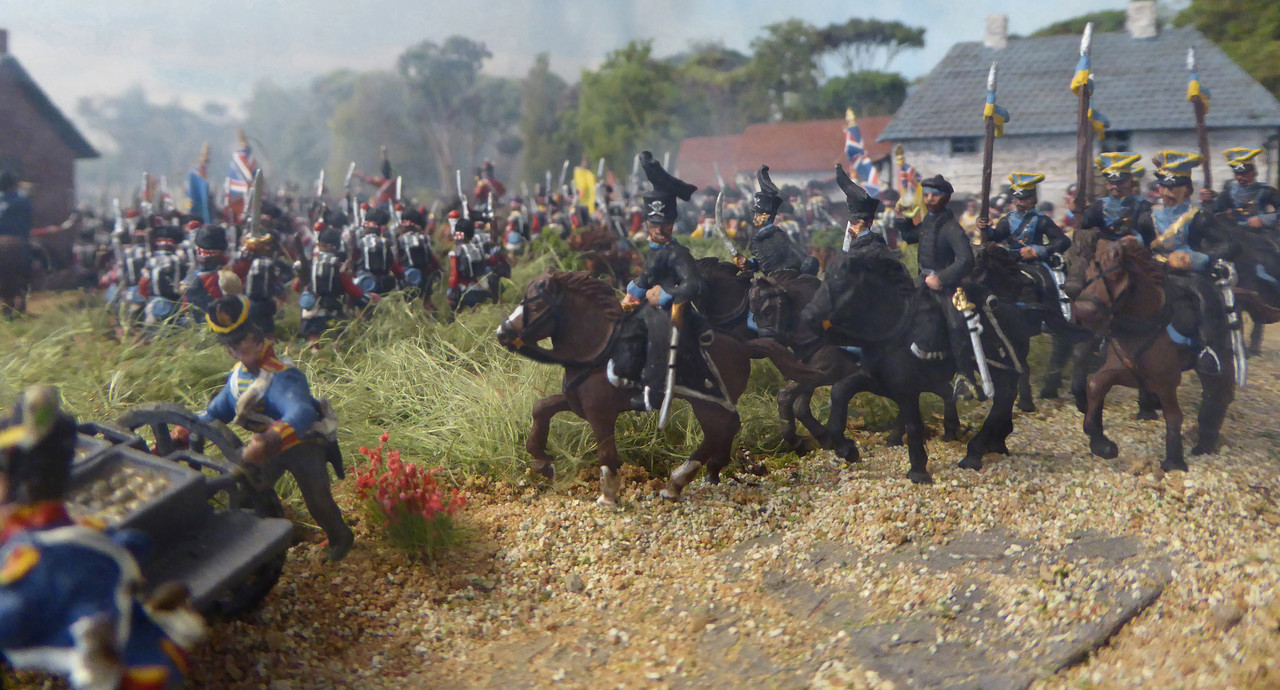 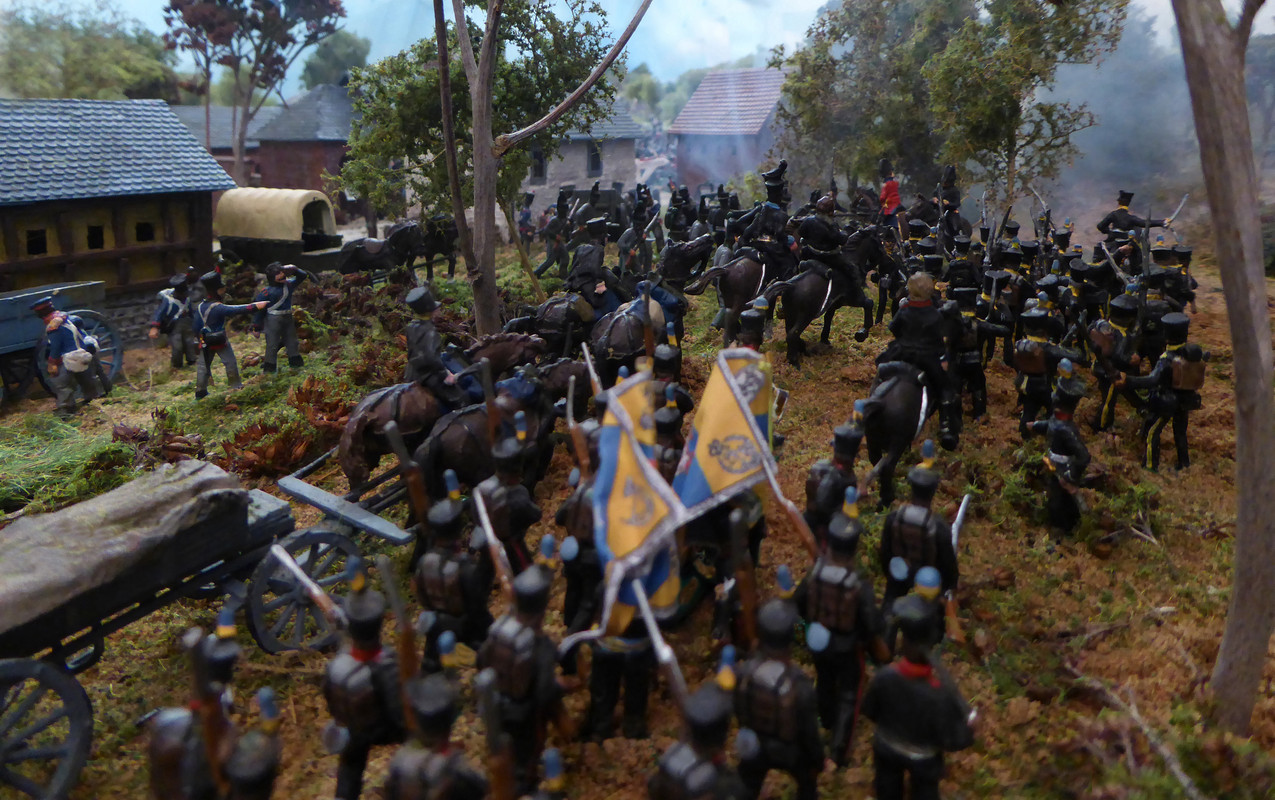 His Grace, The Duke of Wellington is comforted by the arrival of reinforcements but is acutely aware that the full weight of the French advance will shortly be upon him. His line of communication with Field Marshall Blucher has been severed and neither ally is now capable of offering support.