... that's exactly how I feel about it

simply made plain awesome,
you tell us the story of the battle in a wonderful chronology,
one believe to be in the center of the happenings and to be part of the events.

My compliments again for so many more spectacular 'eyewitness' or 'moviestills' of this gruesome battle.
There is many favorite pictures of mine in this series.
Like the ones Sala already showed us. And many many more.

Hello Mr C, nice to hear from you and thank you for your kind comments.

I am afraid that the Dutch are a bit ‘ bashed up’ but they fought a magnificent fight, as per the original, to slow the French down and buy time.

Now it’s Picton, some Nassau and the Brunswickers turn to do their bit.

War is sweet to those who have no experience of it,
but the experienced man trembles exceedingly at heart on its approach.

Exactly up my alley: very good use of the figures available on the market for creating such scenes: I even spot a few Strelets in the mix. Hospitals are not easy to depict, by no means.
Cudos: job is spot on!

The Allied position in the Bois de Bossu has been reinforced by Elements of the Brunswick Corps.

Fighting is fierce but the line is holding. 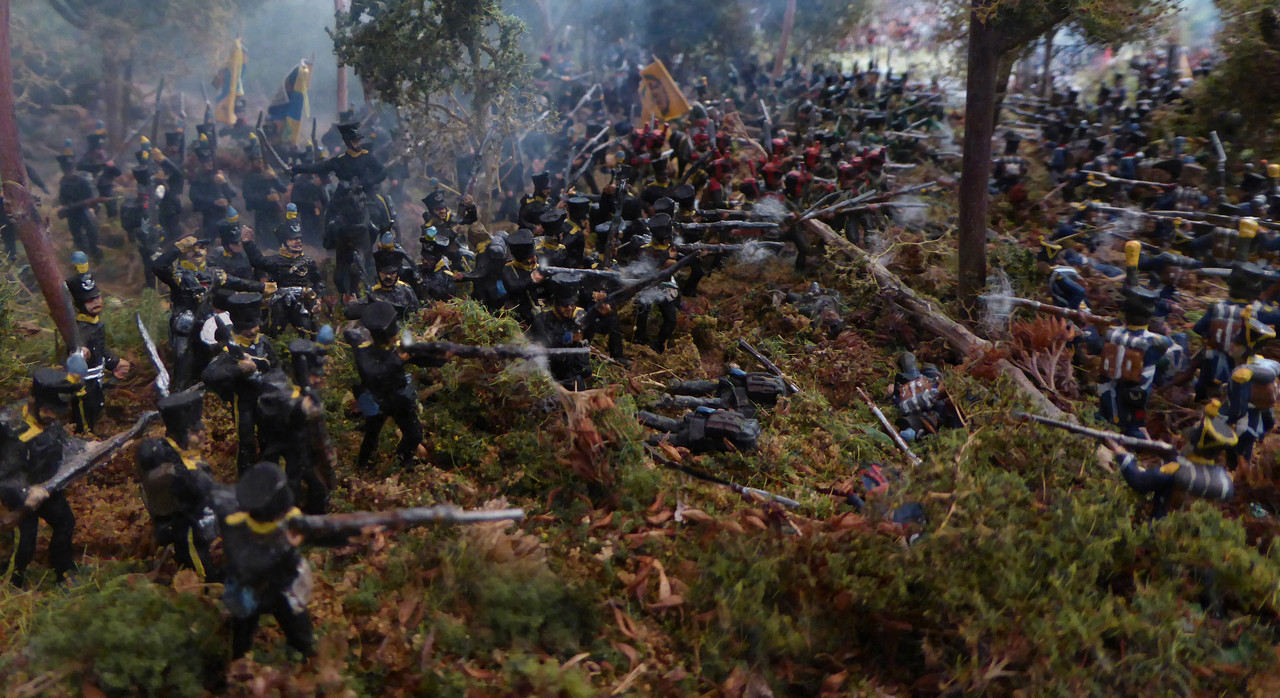 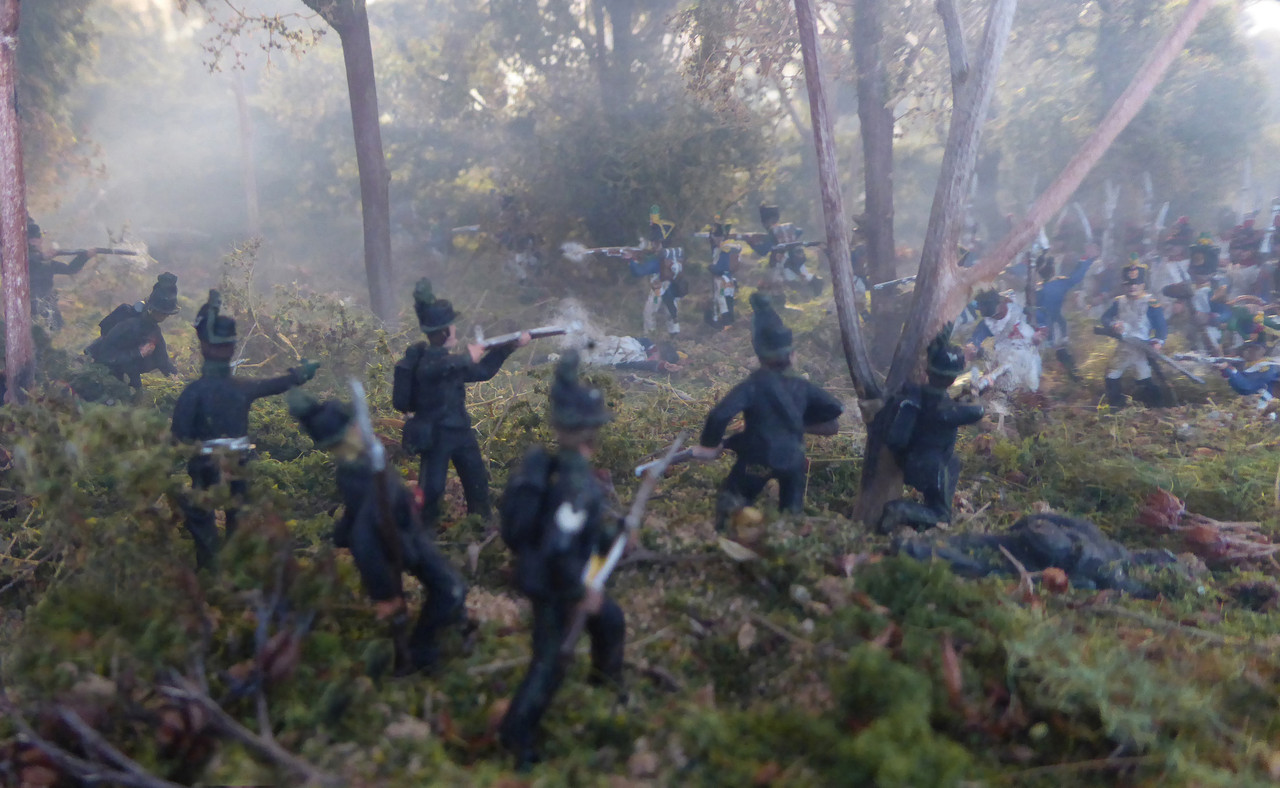 The Herzog von Braunchweig-Luneberg has personally led his hussars in order to halt the French advance at Ferme La Bergerie.

A consequence of this is that the hussars are now under accurate French artillery fire. 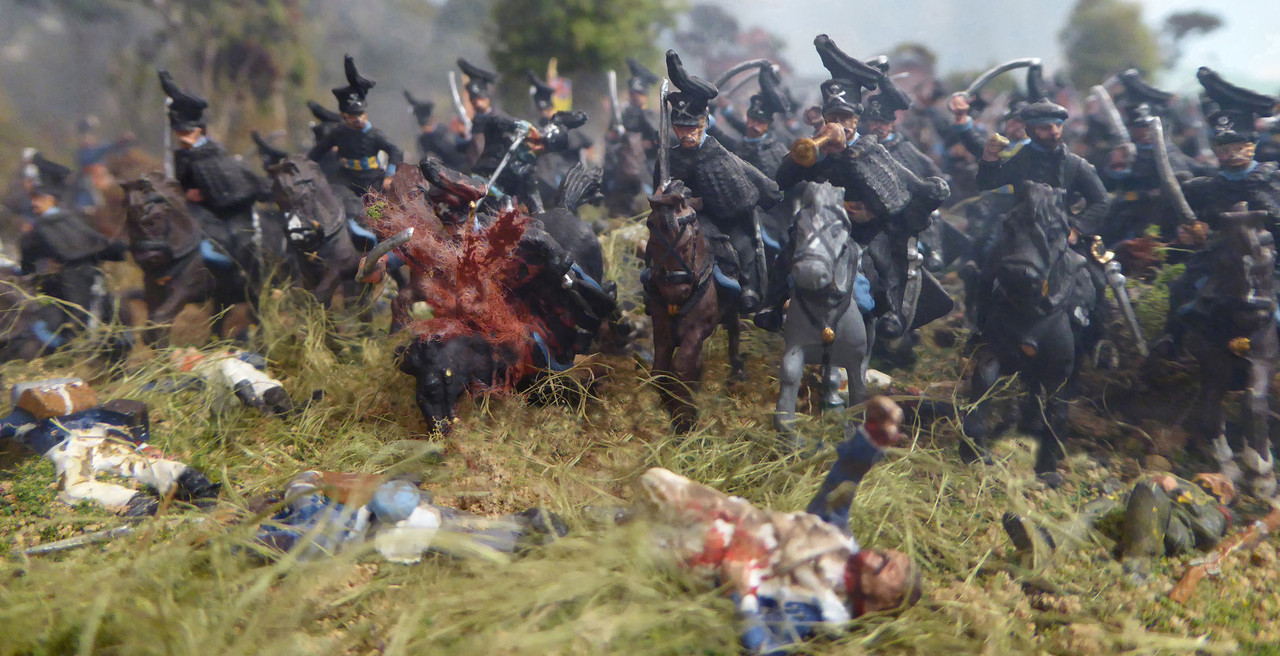 The French attack has stalled and the 42nd Regiment of Line, Lieutenant-Colonel Sir Robert Macara, is moving forward to expand the Allied perimeter. 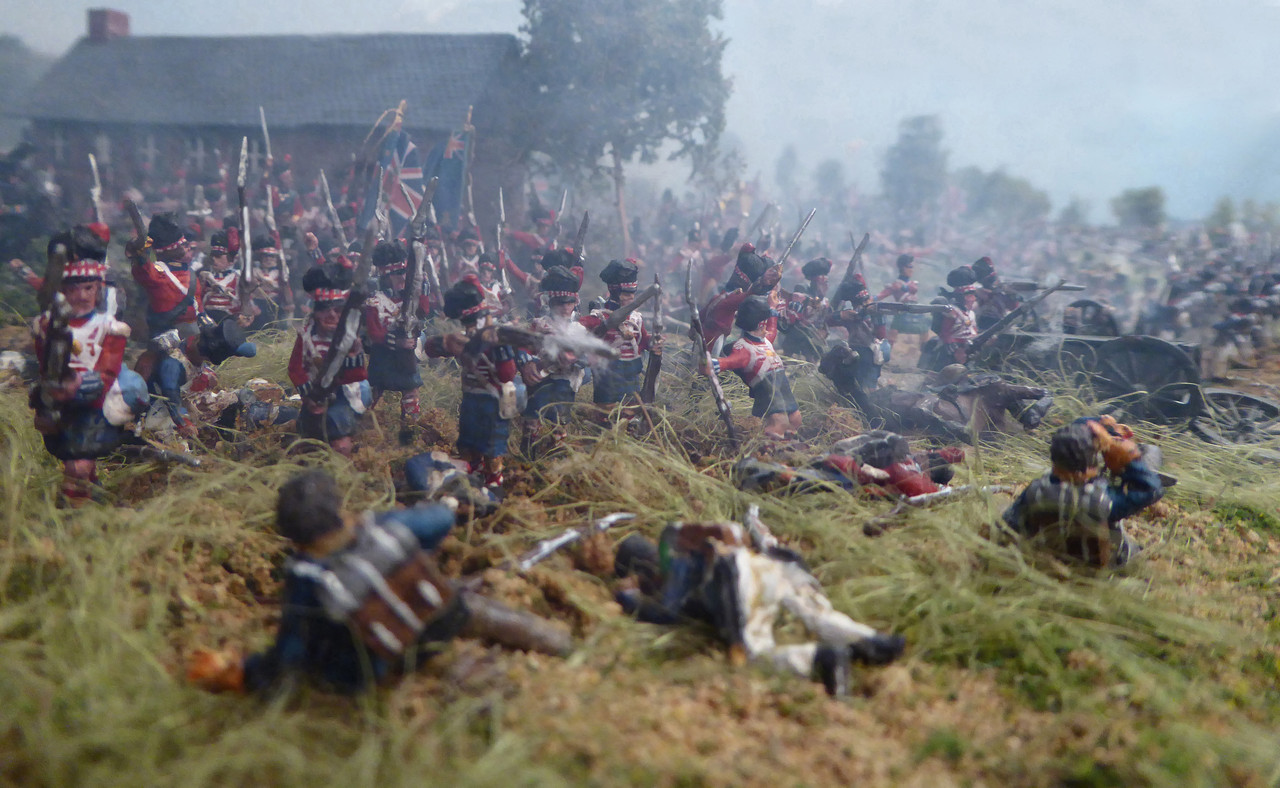 The Allied position east of Ferme La Bergerie is under a concerted attack by the French 5th Infantry Division, Lieutenant-General Baron Gilbert-Desiree Bachelu. 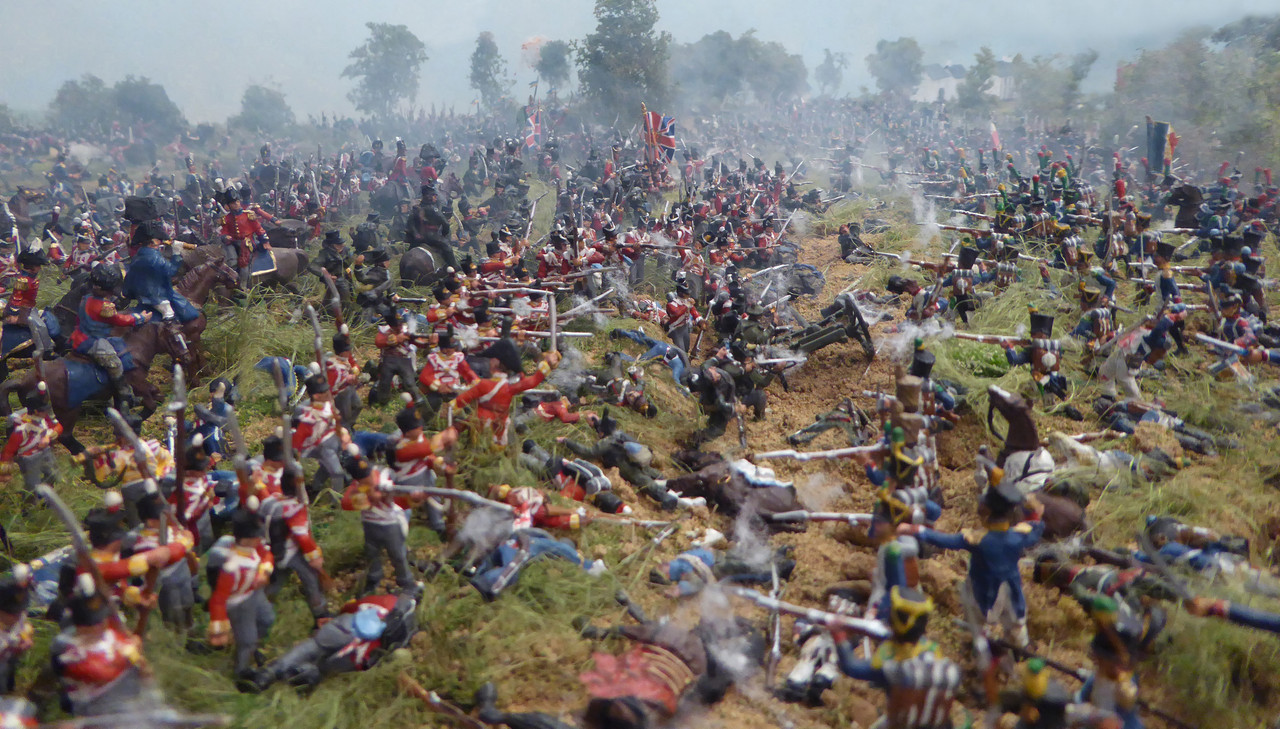 His Grace, The Duke of Wellington is supervising the defence and support in the form of the Brunswick Leib Battalion under Major Frederich von Prostler is being organised. 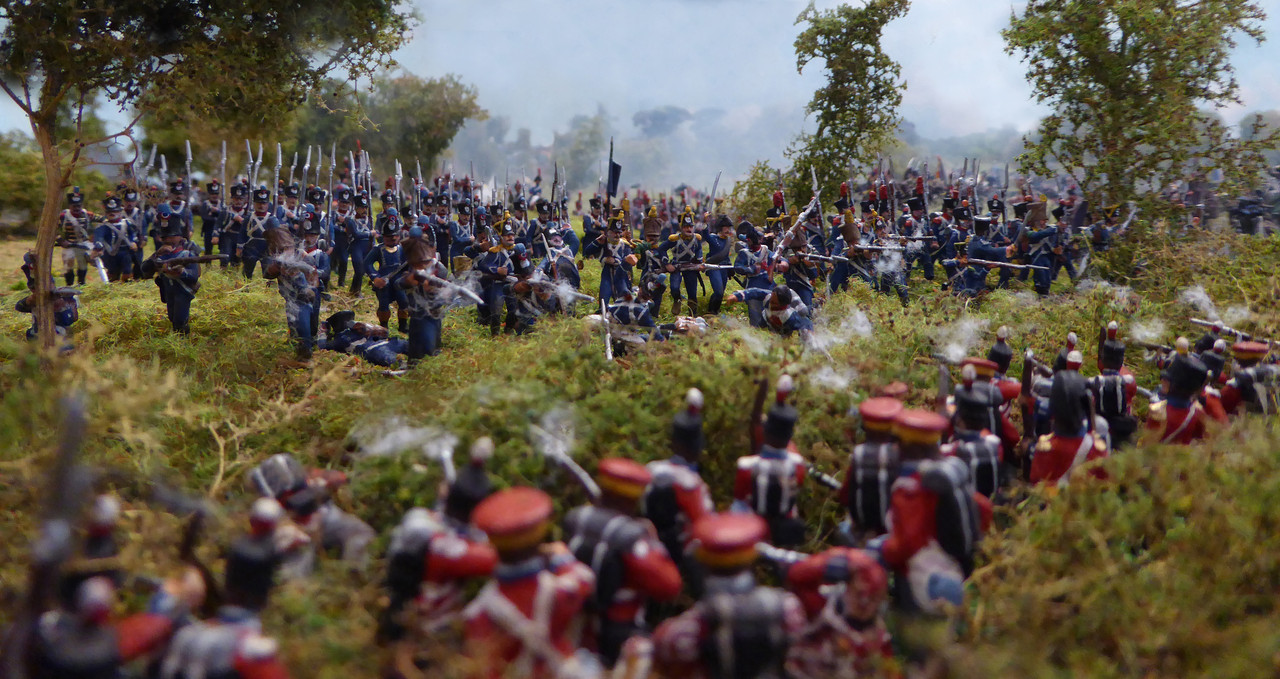 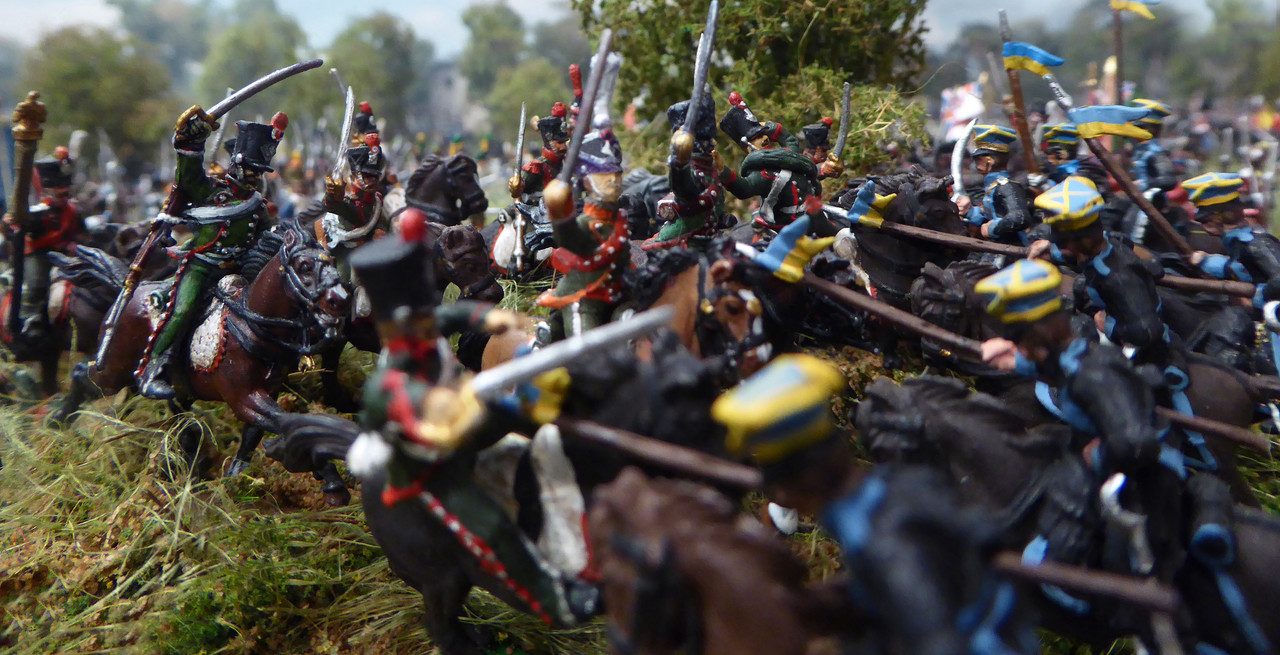 Marechal Ney, Duc d,Elchingen, Prince de la Moskowa has returned from the front line and receives an update of the action from Lieutenant-general Honare-Charles, Comte Reille.

Ney is advised that lieutenant-general Francois-Etienne-Kellerman, Comte Valmy is awaiting orders. Unfortunately, as per his earlier order, only the 2nd Brigade, Marechal-de-camp Baron Marie-Adrien Guiton from the 11th French cavalry Division is present.

Nevertheless, the order to advance is immediately despatched. 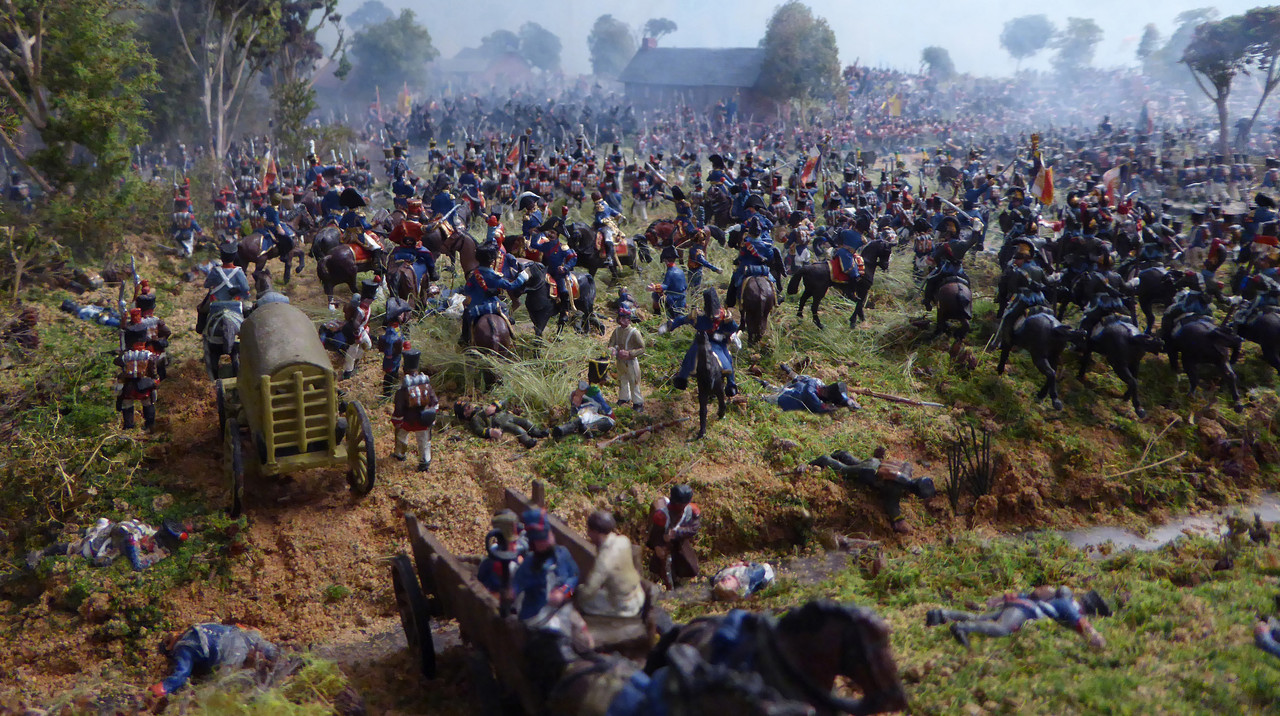 The action is reaching its critical stage, the honour of France is at stake.

wonderful new photos...
Again and again amazing how you photograph the Scene!

Again a wonderful realistic scenery! Great pictures with a lot of atmosphere! And last but not least: A lot of work in top quality!

It's a real adventure to look around ! After the viewing one has the feeling that one was lucky not to catch a ball!

Impressive work again.
You still do make the most bloody scenes of all of us, when I look at that hospital.
My favorite detail are the red caps of the Hannover troops. Well known but seldom seen in miniature.
And I love your way of picturing all of it.
Well done.