wow, what a project and what an amount of work. I love your dynamic pics and the smoke effects. Looks perfect to me.

I agree with everybody: stunning work, and the ambience is once again rendered perfectly.
My favourite shots are the capture of the colours and the one close-up under the tree canopy. 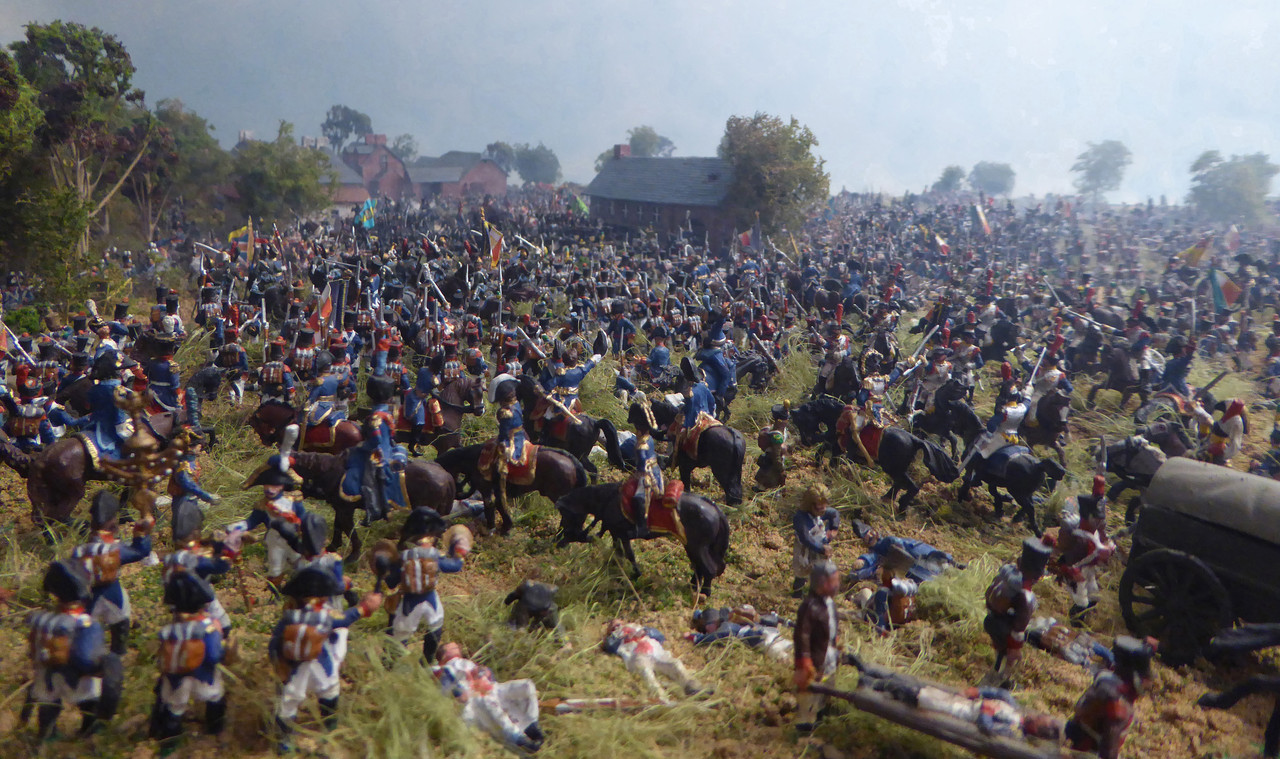 The now disordered formation is swept by Allied musketry, arresting its advance. 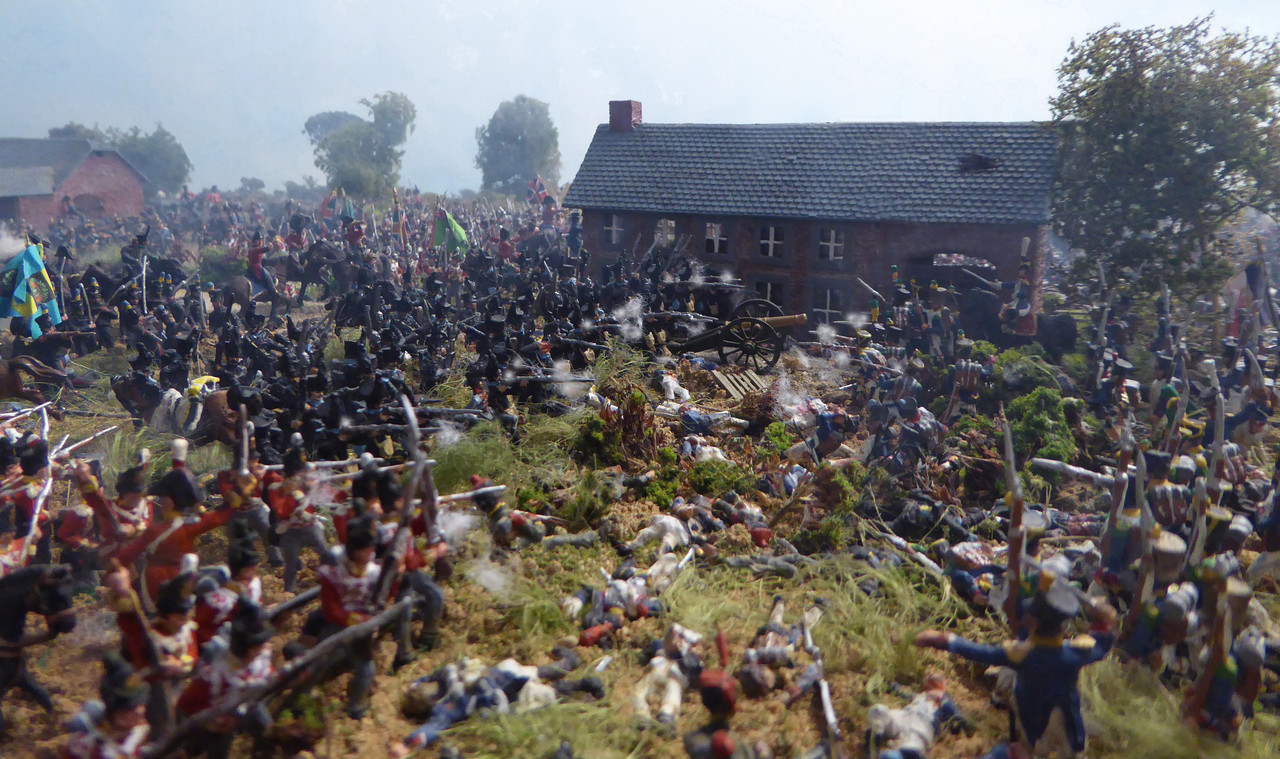 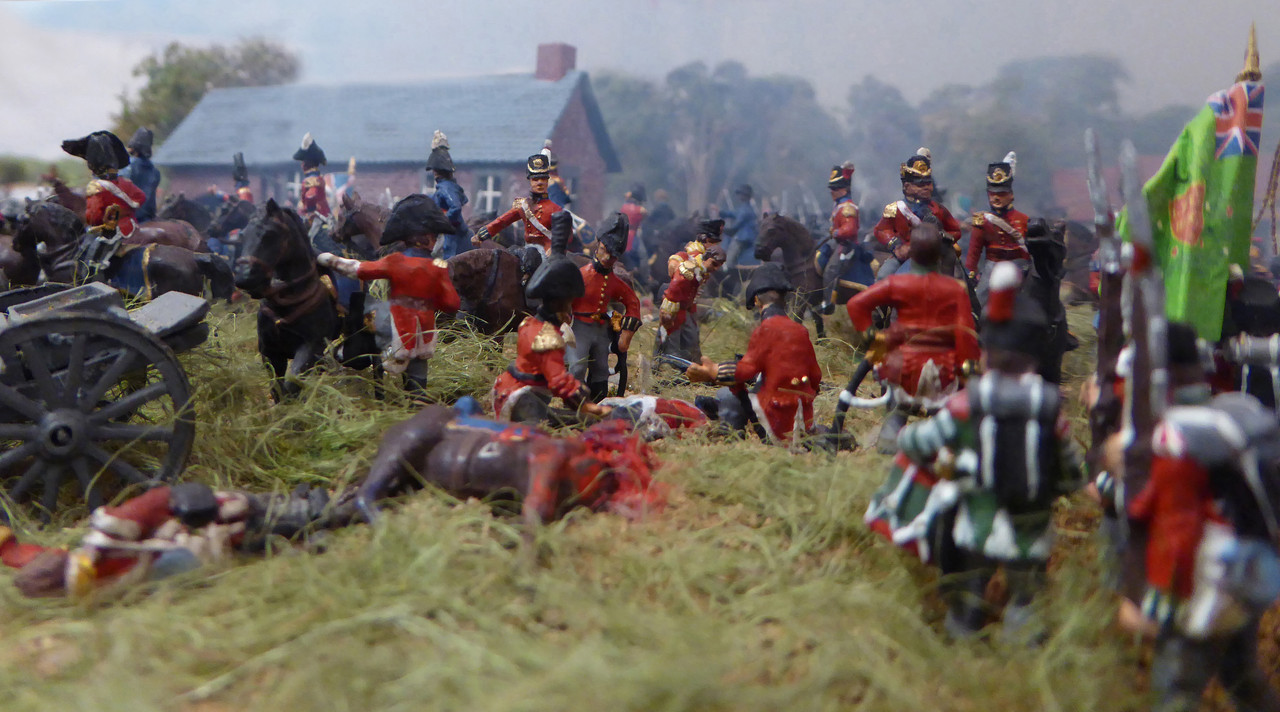 The Allied centre, anchored on the Ferme La Bergerie is under a furious assault from the French 9th Infantry Division, Lieutenant-general Maximillian-Sebastian, Comte Foy commanding. 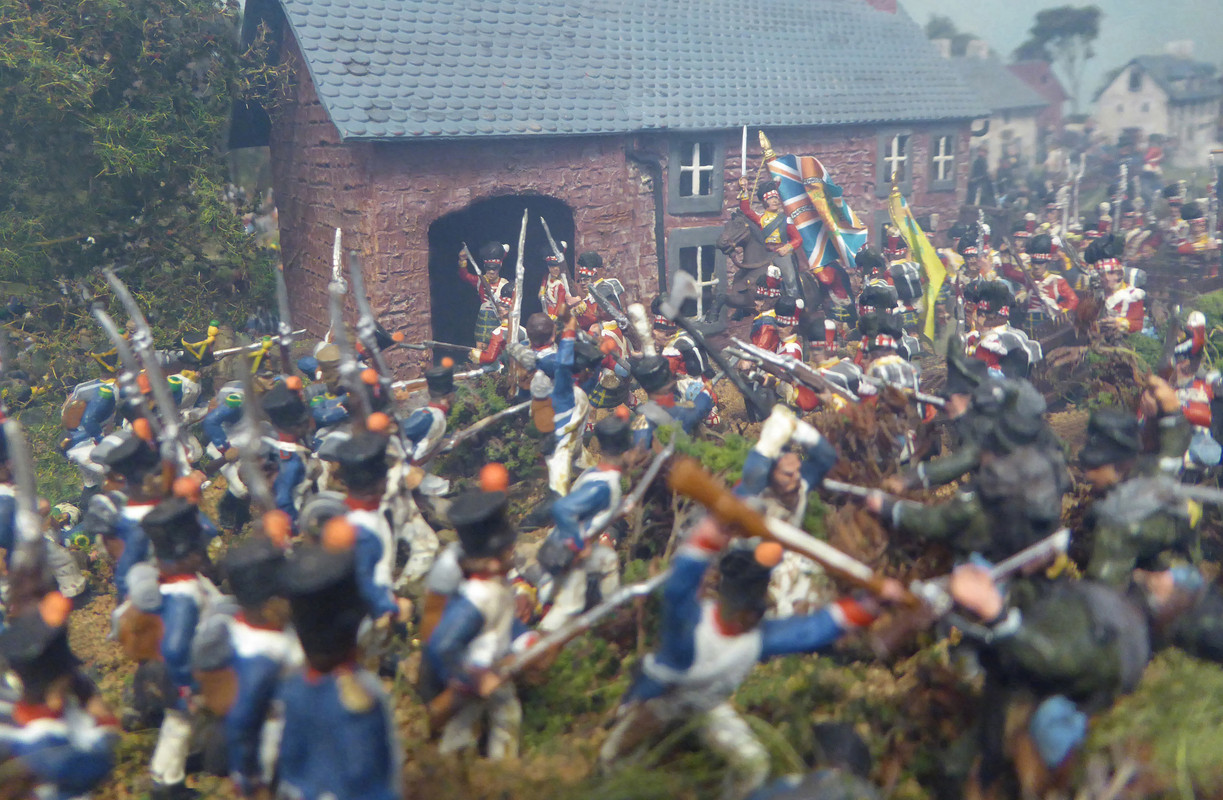 They together with the 11th Cuirassiers, are stretching the Allied centre to breaking point. 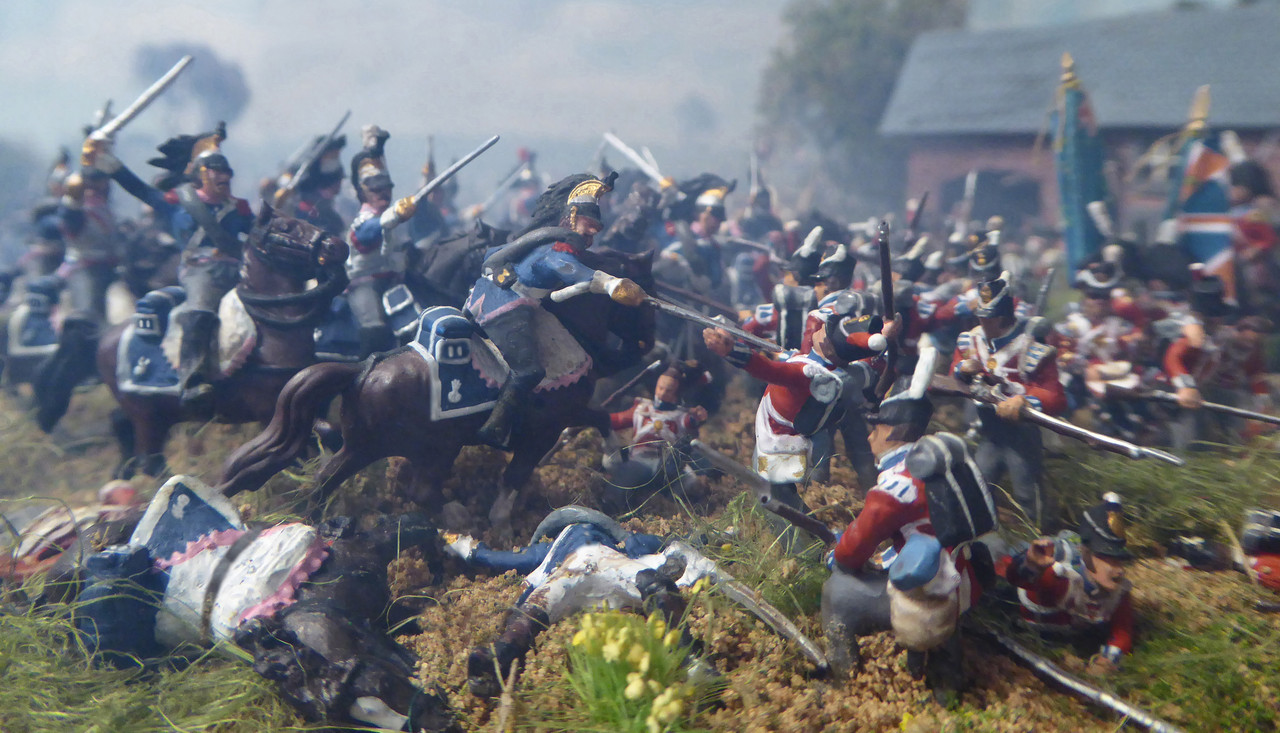 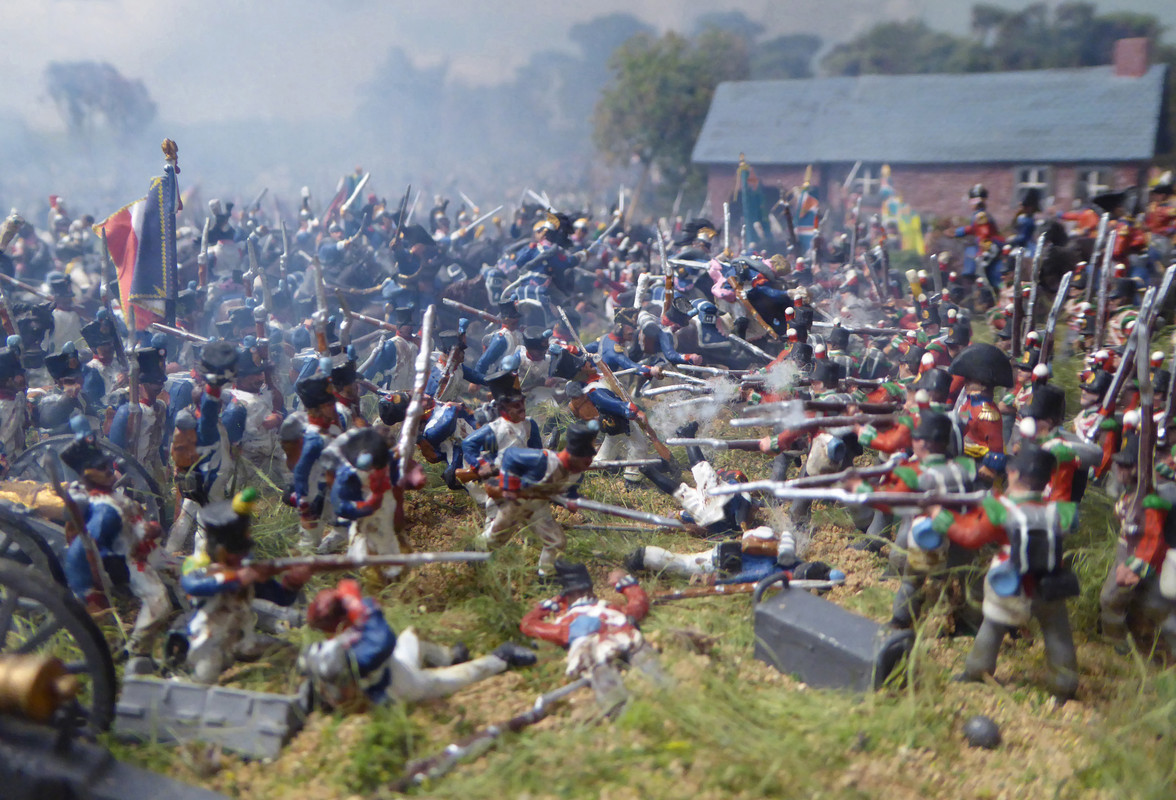 General Foy is presented with the spoils of war by a proud 11th Cuirassier. 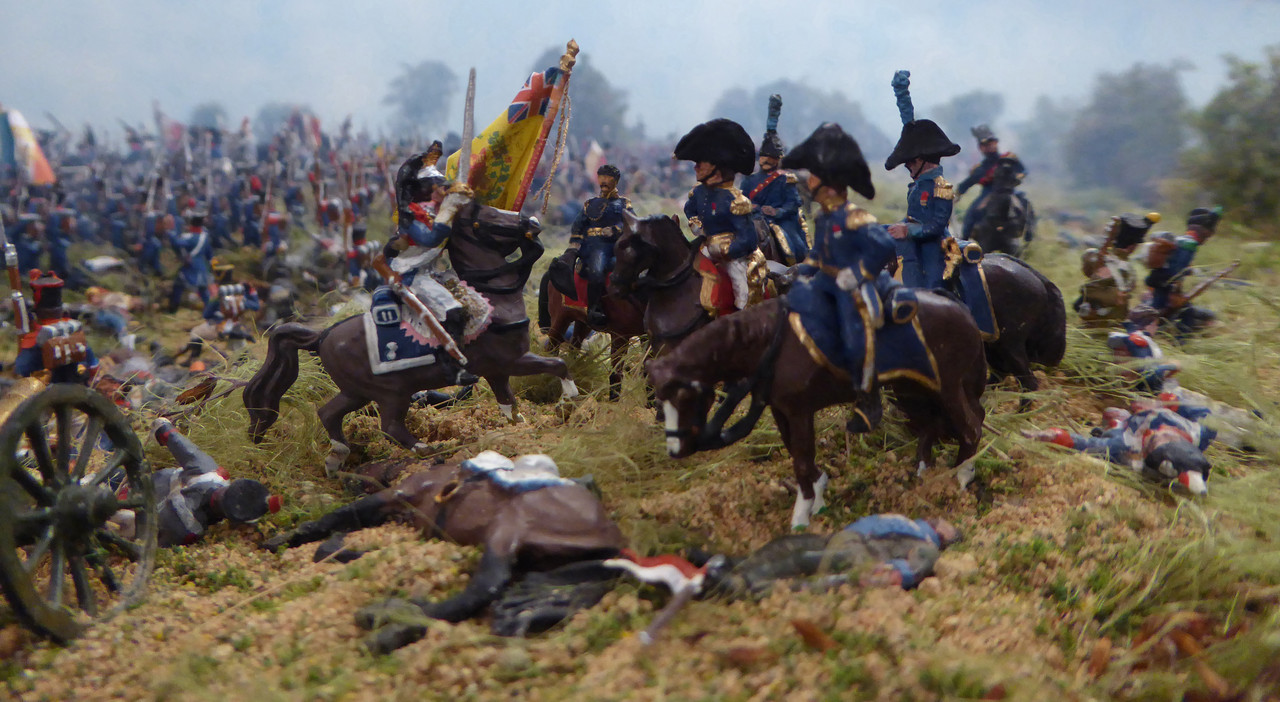 Having seen off the French chasseuers the 5th Belgian Light Dragoons temporarily fall to the lure of easy prey and chase down stray French infantry. General Willem, Prince Orange-Nassau attempts to rally his countrymen. 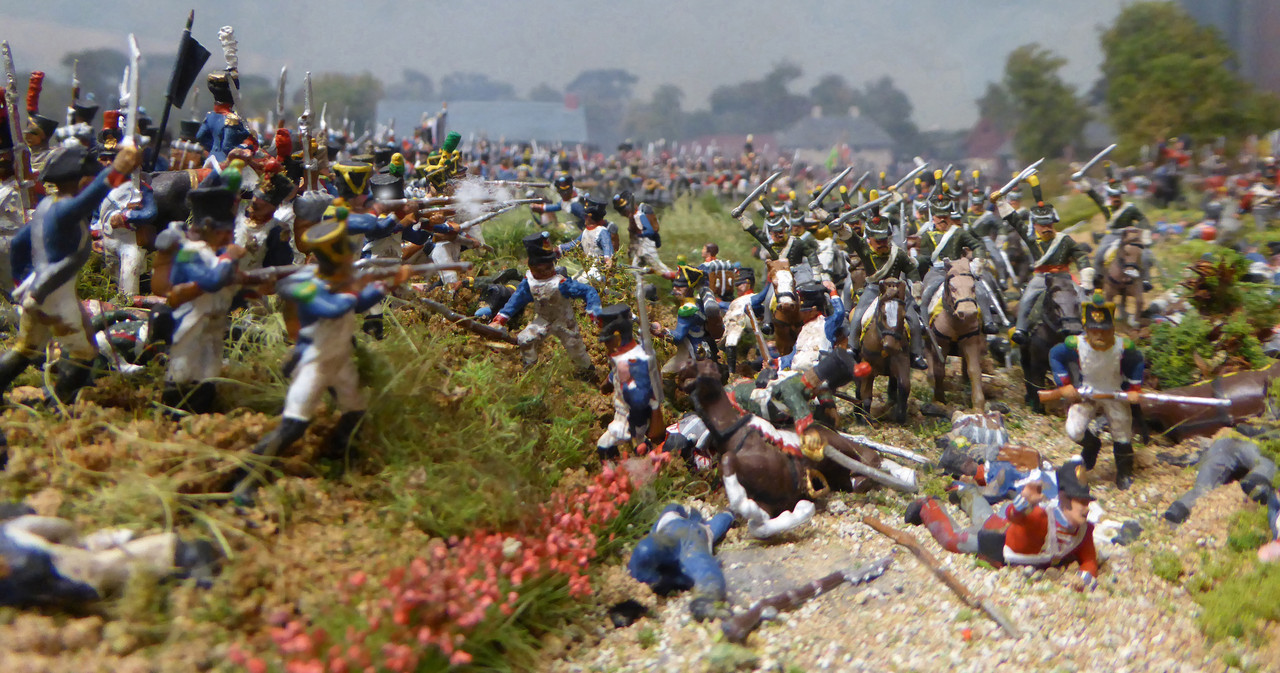 Hanoverian reinforcements, supported by artillery, are pushing the French right wing back, putting the French central assaults flank in danger.

The French Cuirassiers having routed the Royal Scots, Lieutenant-Colonel Colin Campbell commanding , retire with their horses blown believing the Allied centre is about to crack.

The brave French infantry surge forward in a final supreme effort to be met by the fresh 3rd British Infantry Division and its firepower.

It is heroic, magnificent and doomed! 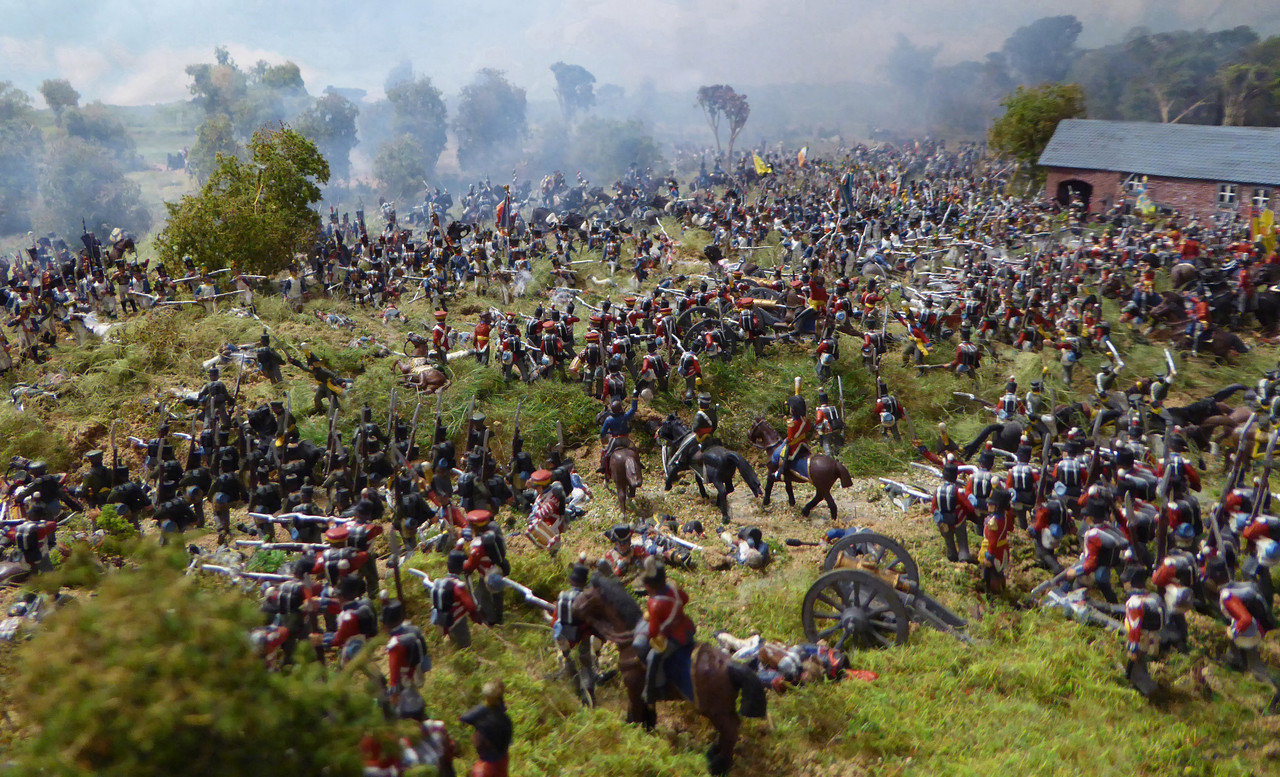 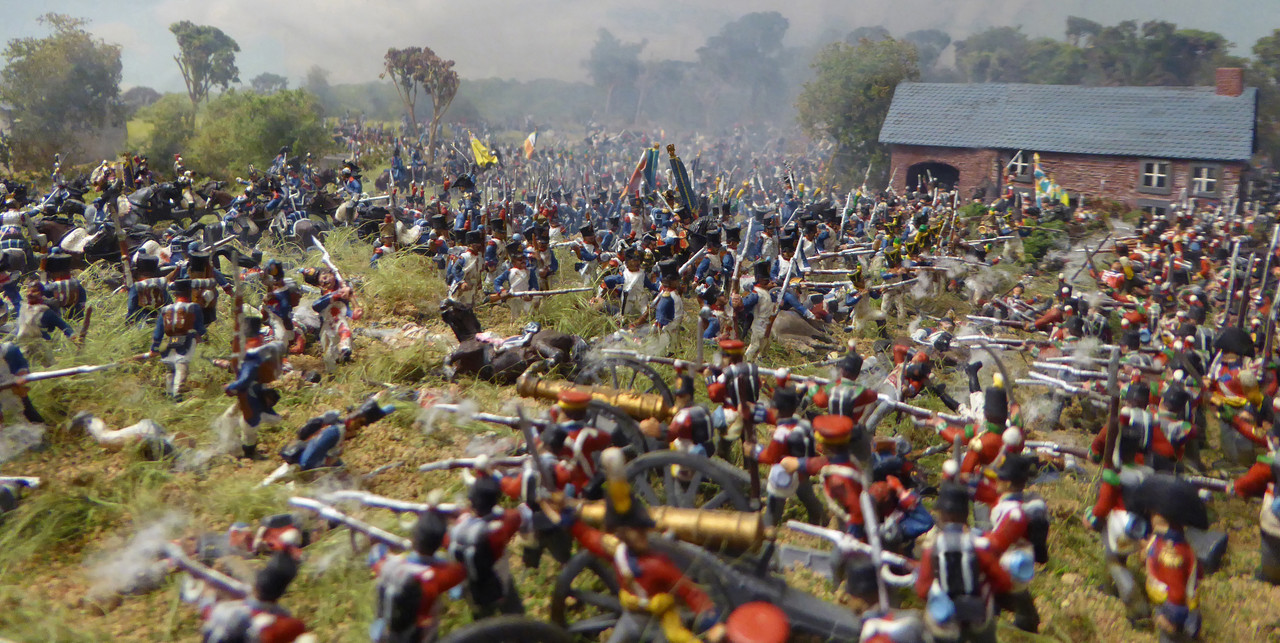 Contemporaneously, the Dukes receives further reinforcements in the shape of the British 1st Infantry Division Major-General George Cooke commanding, via the Nivelles road. 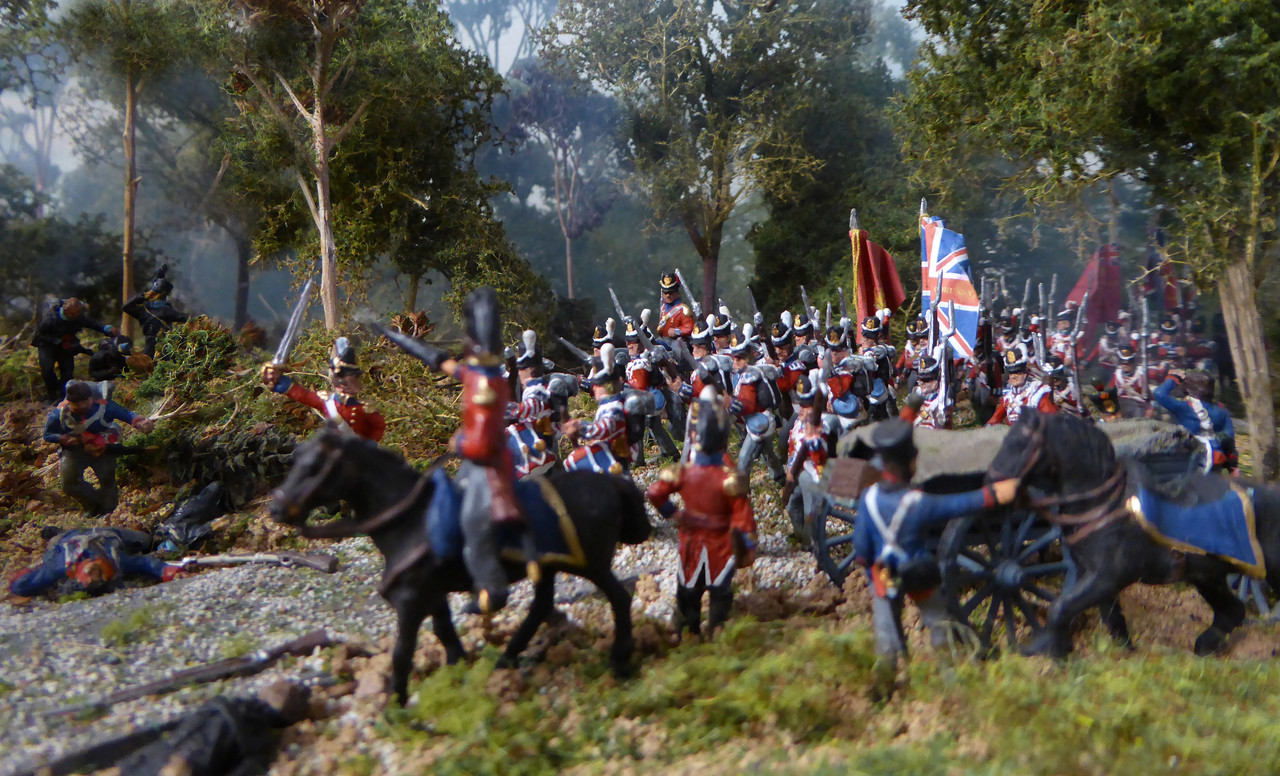 The French have lost the initiative, Ney has no reserves left whilst the Dukes command has been swelled,with more troops enroute.

The exhausted French infantry sense that the tide has turned and await Wellington's next move.
Nach oben

Very impressive and overwhelming indeed!
Watching this dramatic series of photos is really like watching a movie.
Nach oben

Colossal, fantastic ... something impossible for me but beautiful to do.
Santi.
Ad utrumque paratus.
http://sfgbarcelona1972.blogspot.com.es
Nach oben

The Guards of 1st British Infantry Division [ Major-general George Cooke commanding] having entered the Bois de Bossu are pushing the French to the edge of the wood. Fighting is fierce but the French have no reserves and can only delay the inevitable faced with 4000 exhausted but eager Guardsmen. 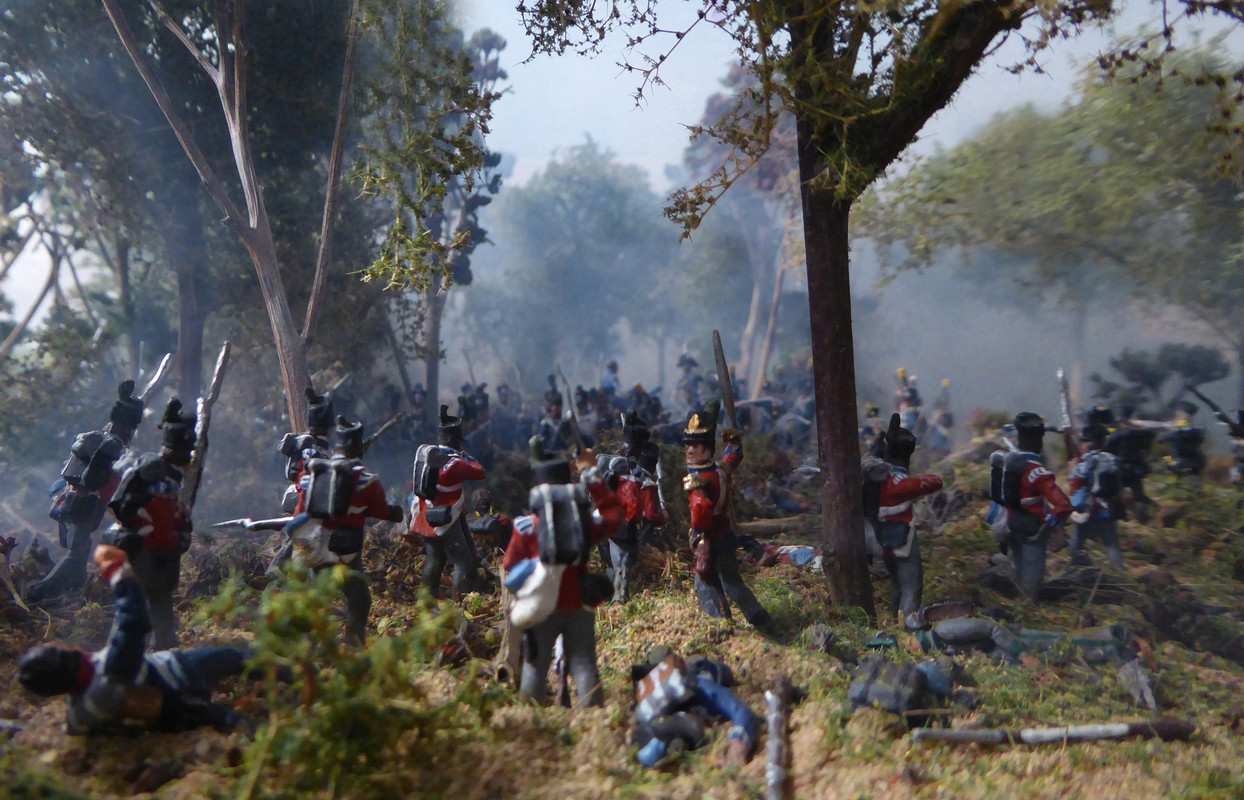 The withdrawal of the 2nd Legere [Colonel Pierre-Francois Maigrot] to positons near Piramount has allowed the British 95th Rifles [ Lieutenant-Colonel Sir Andrew Barnard] to infiltrate the hamlet of Thyle. 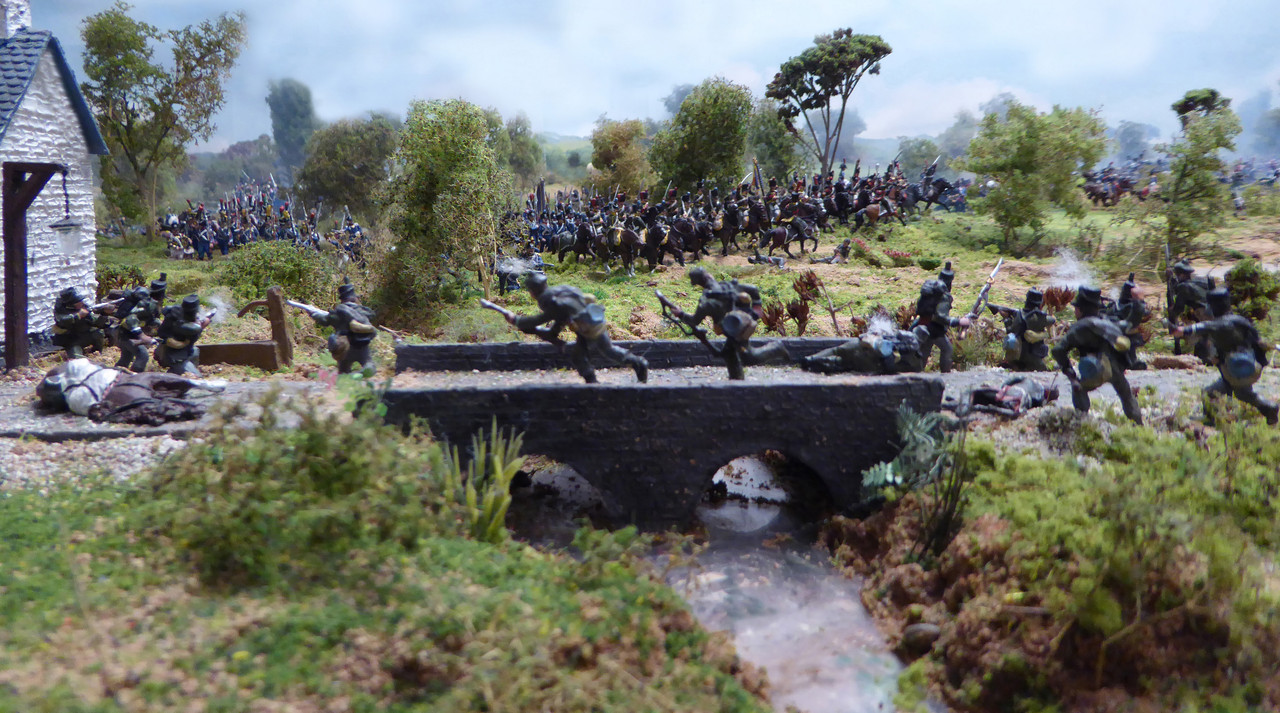 This action has reopened the Namur road and the communication route to the Prussians at Ligny. 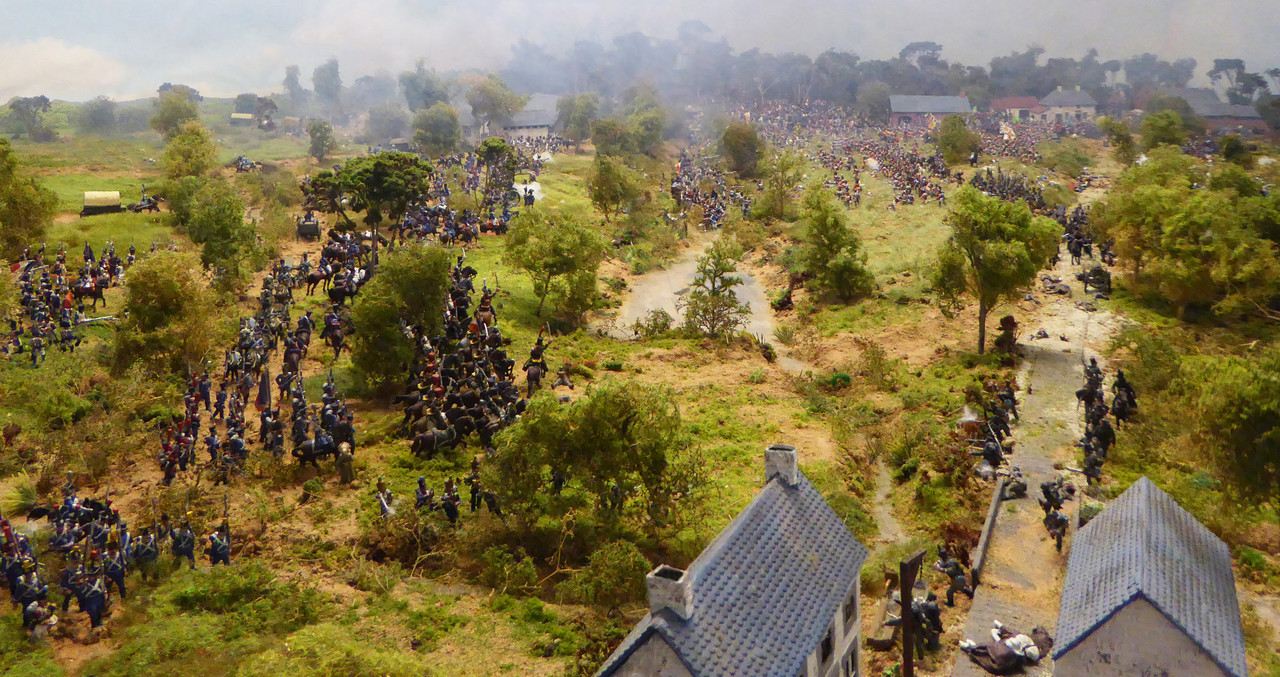 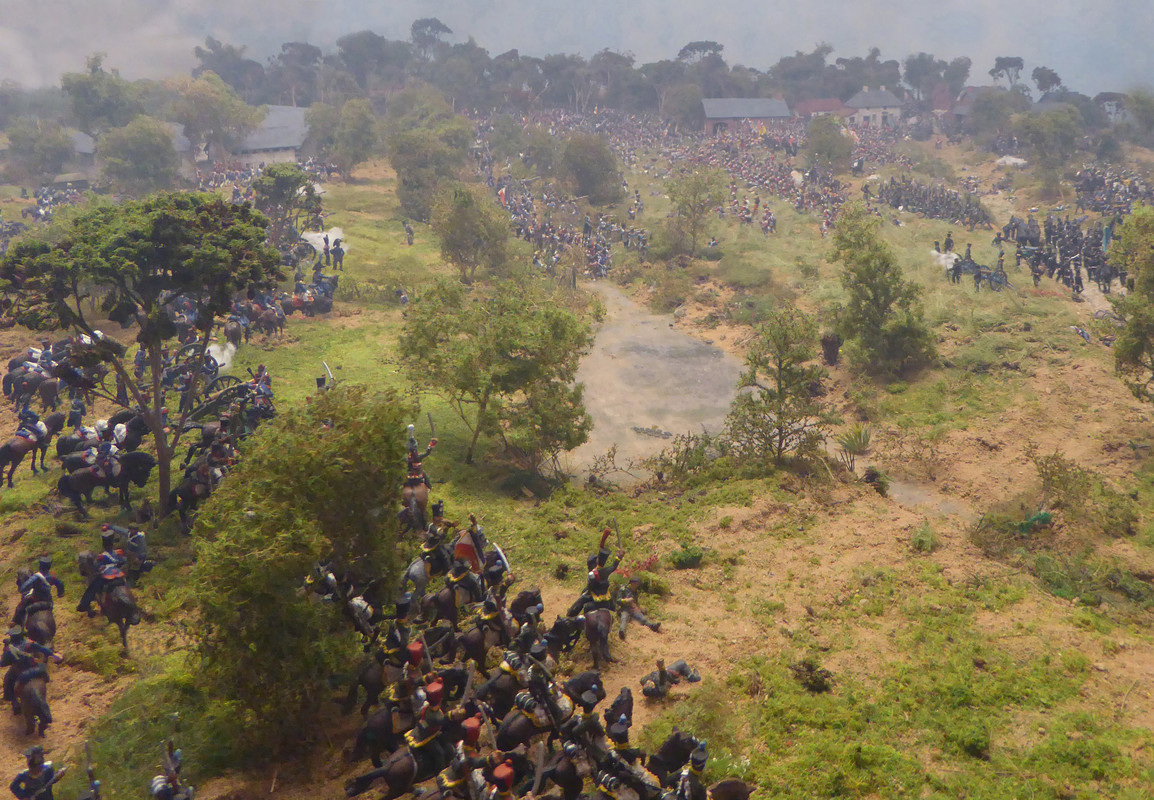 This advance is supported by newly arrived elements of Brunswick infantry and artillery extending the Allied left.

The 1st Hanoverian Infantry Brigade [Major-General Count Frederich von Kielmansegge] , advances towards the Gemioncourt stream pushing back the dispirited French who elect to make a stand behind the sturdy hedge line.

However, the French artillery, efficient as ever start to inflict serious casualties and the fighting dies down ending in a stalemate with both sides exhausted.

Marshal Ney having dined with Prince Jerome despatches his report to the Emperor before trying to get some much needed rest. 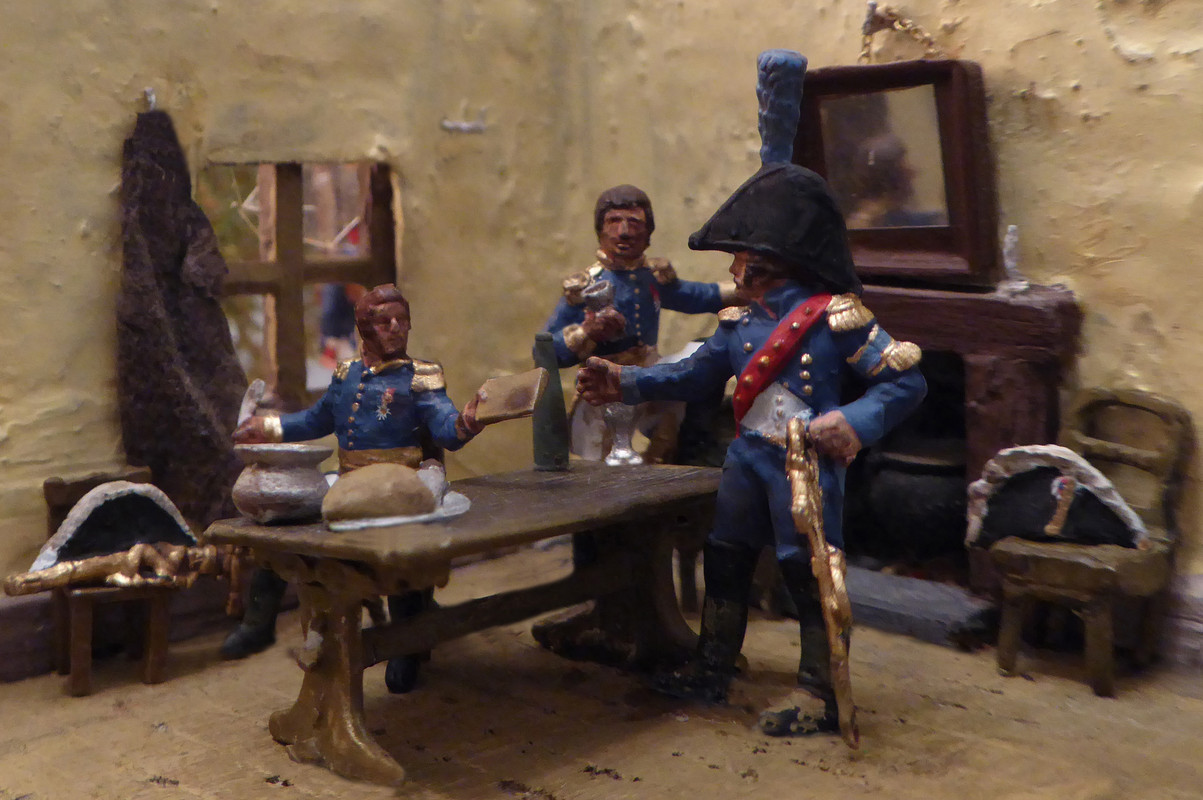 Meanwhile as dusk falls His Grace, the Duke of Wellington, accompanied by General Willem, the Hereditary Prince of Orange-Nassau scout the French camp near Ferme Lairalle. 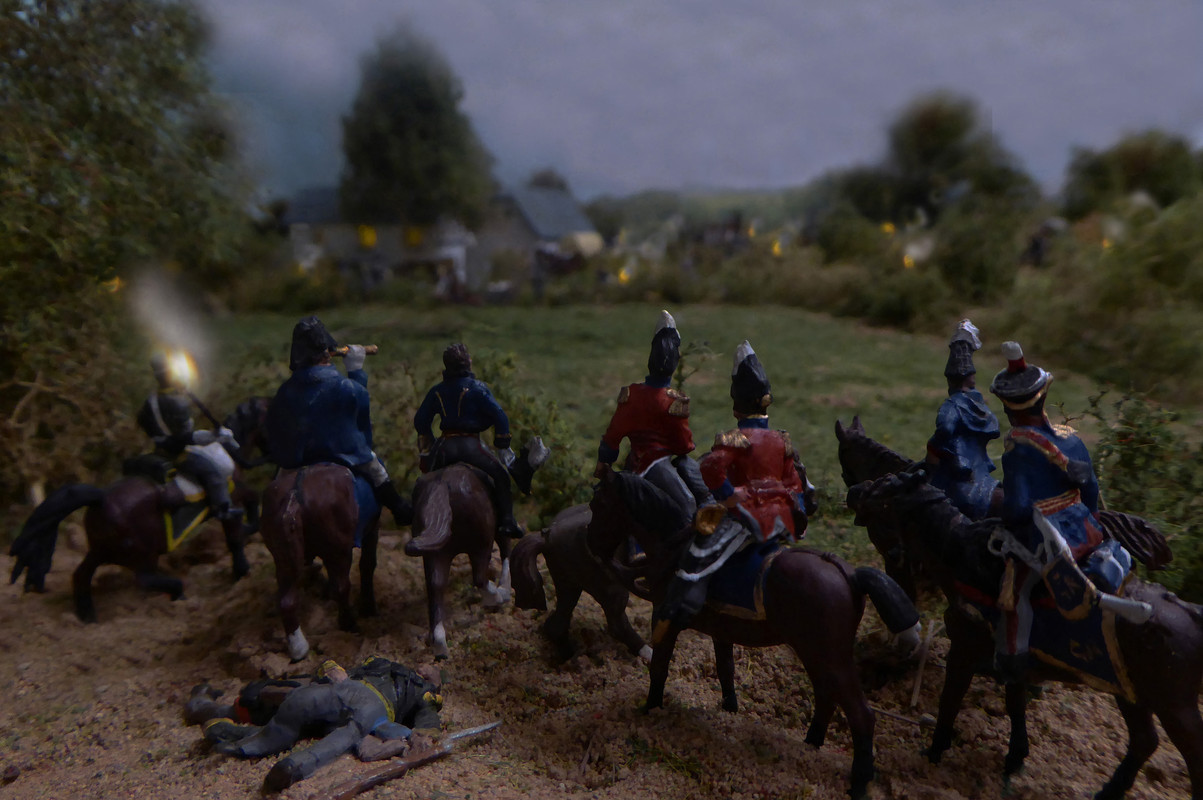 Today has been a momentous one, and tomorrow promises to be another.....
Nach oben
Antworten
95 Beiträge