Dedicated to the late Peter Bradford, a friend , a war gamer, a re-enactor 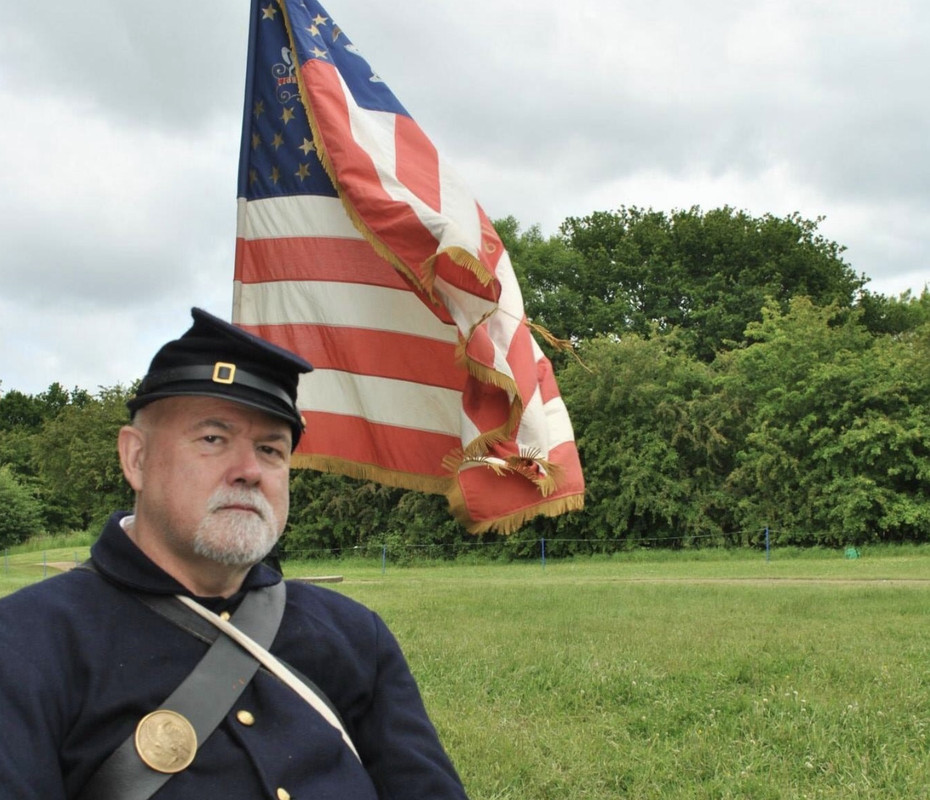 Following battlefield successes in the Peninsula campaign and more recently at Second Manassas, the Confederacy’s premier general, Robert E Lee led his forces north in an attempt to take the war away from Virginia and into Maryland, a state thought to harbour sympathy towards the southern cause.

It was thought that further military success might lead to European recognition of the cause and bring legitimacy to the Confederacy.

Meanwhile, a reluctant President Lincoln had re instated General George. B. McCellan to command the majority of the Union forces following General Pope’s humiliation at Second Manassas.

McCellan, an efficient organiser of men and their supplies had shown timidity during the Peninsular campaign despite possessing superior numbers and equipment.

McClellan was a schemer, always requesting more troops and blinded by inaccurate reports from his Pinkerton intelligence section usually supplying inflated enemy troop figures. His stubbornness to get his army on the road and the many excuses for not doing so infuriated Lincoln and was, unfortunately known to Lee.

Nevertheless, he was loved by his men who welcomed his re appointment.

Lee, characteristically, split his forces using the Shenandoah valley as a conduit for movement, shielded by the South mountains with General JEB Stuart’s cavalry as scouts.

However, a bizarre incident occurred whereby Lee’s campaign plan, order number 191 was revealed to McClellan via a copy wrapped around some cigars found in a field vacated by the Confederates.

McClellan was galvanised into action, although the controversy over the cigars and his reaction time in putting his army in motion still continues.

Lee, alerted to McCellan’s newly found vigour fought holding actions at the mountain passes of Foxes, Turners and Cramptons gaps. These hard fought battles allowed just enough time for his army to concentrate at Sharpsburg albeit without AP Powell’s Division which was ordered to invest the armoury at Harper’s Ferry.

McCellan, exuberant about his prospects of annihilating Lee stated that ‘ Here is a paper with which if I can not whip Bobby Lee I will be willing to go home’ before reverting to previous form, no doubt influenced by inflated enemy troop estimations from the usual source.

Lee, confident that his opponent’s ‘slows’ had returned decided to offer battle and waited for McClellan.

The good General duly obliged Lee with poor reconnaissance, meticulous battle planning , a re organisation of his army’s command structure and in doing so wasted the most precious battlefield commodity …Time.

On the morning of the 15th September the troops of James’s Longstreets command cross the Antietam creek via the Orndorff bridge, on the Boonsborough pike prior to taking up positions along the Sharpsburg ridge. 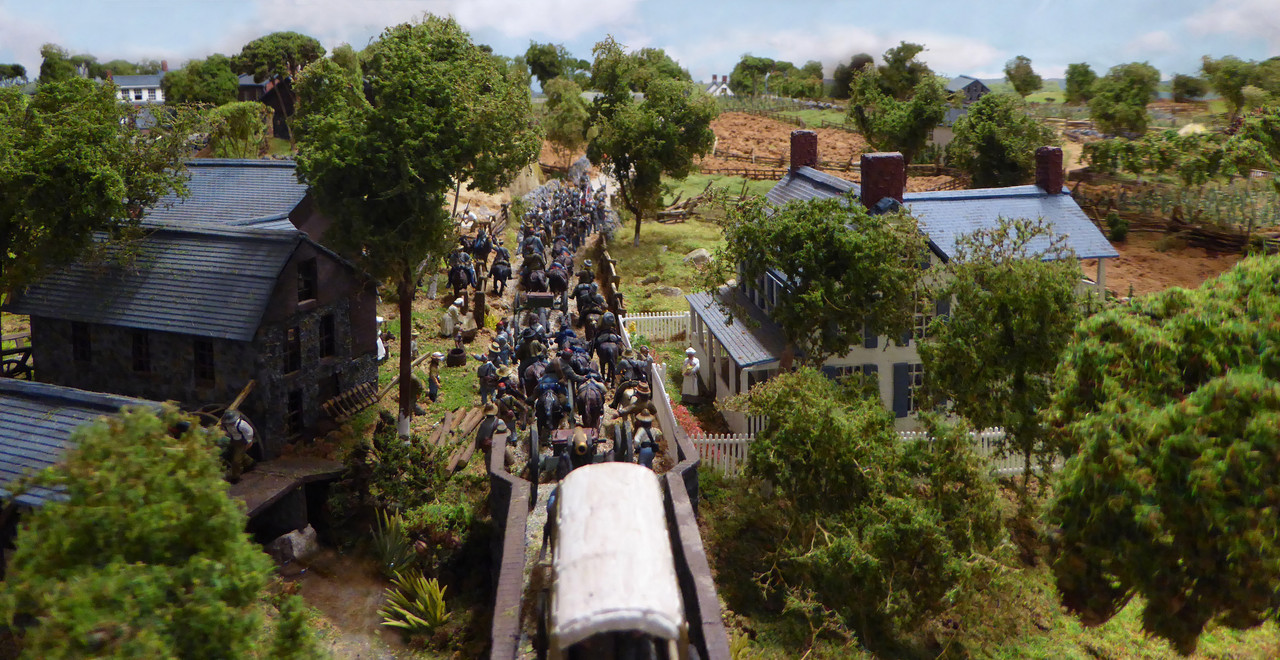 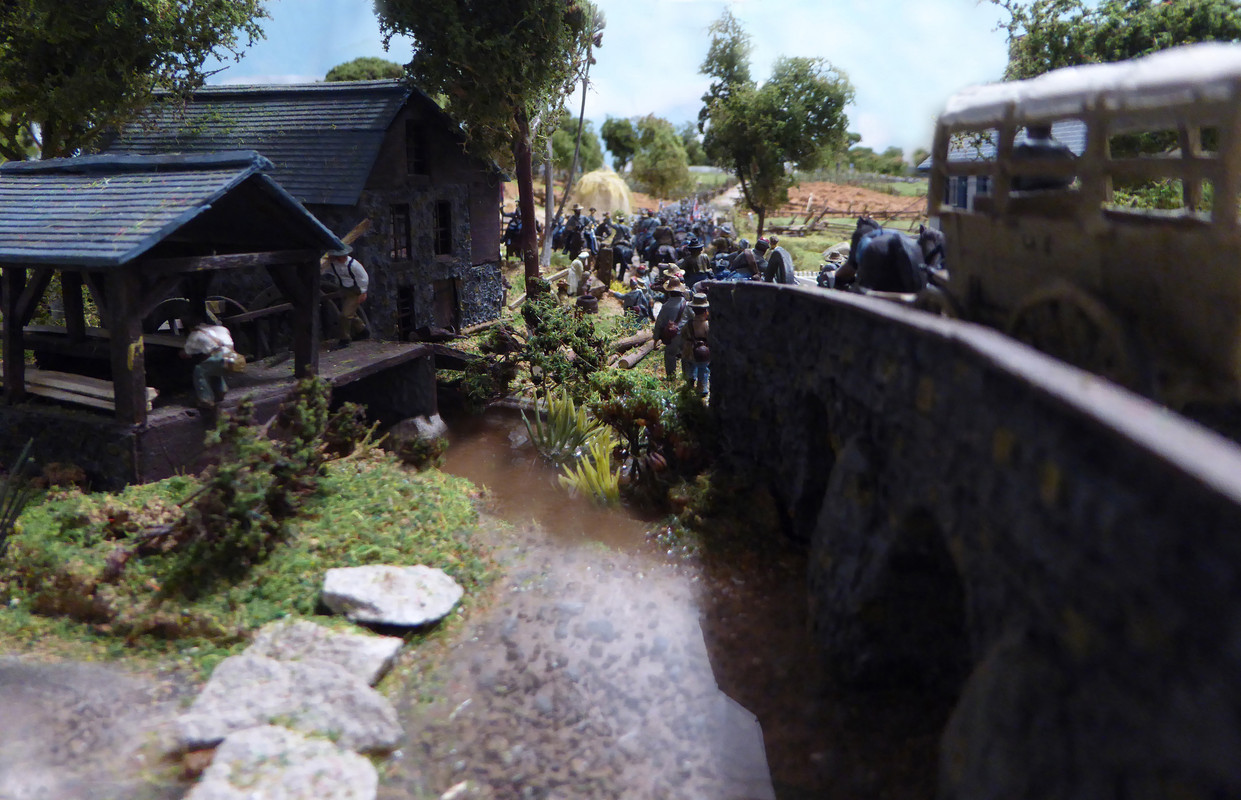 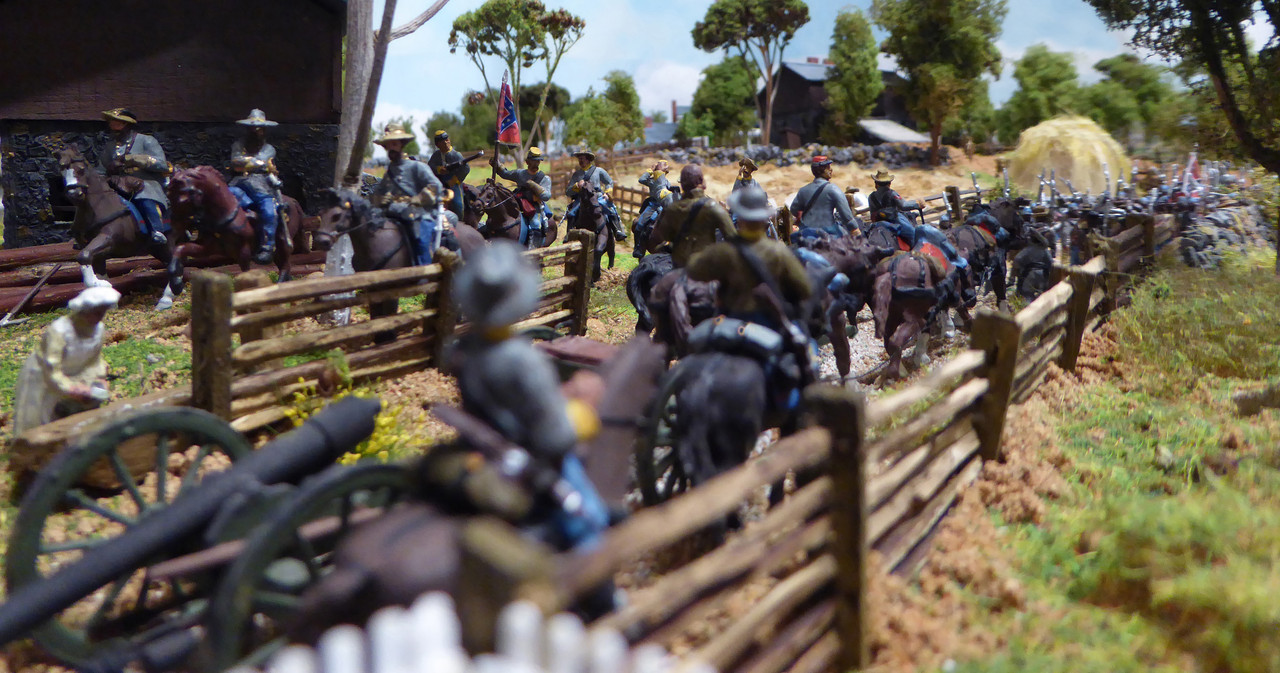 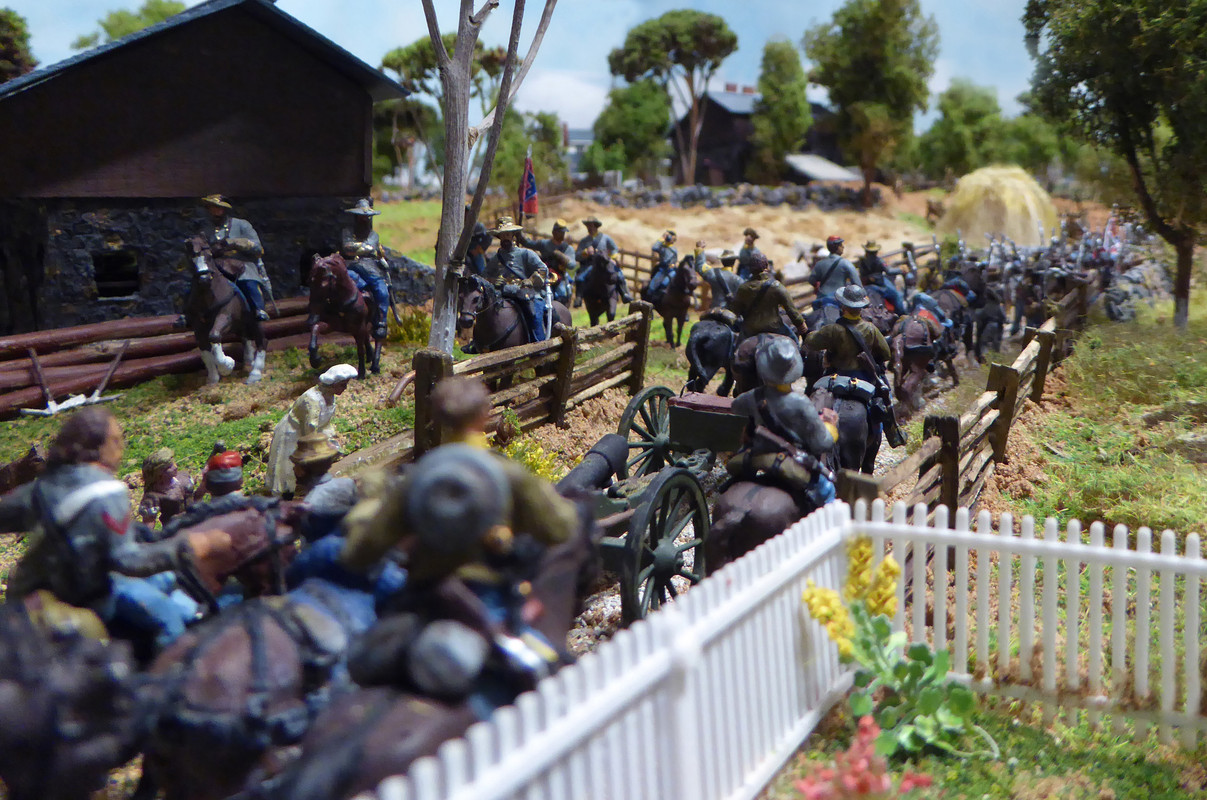 Mr Joshua and Mary Newcomer watch the Confederate forces arrive. They will shortly leave their property to gain sanctuary from the impending battle. 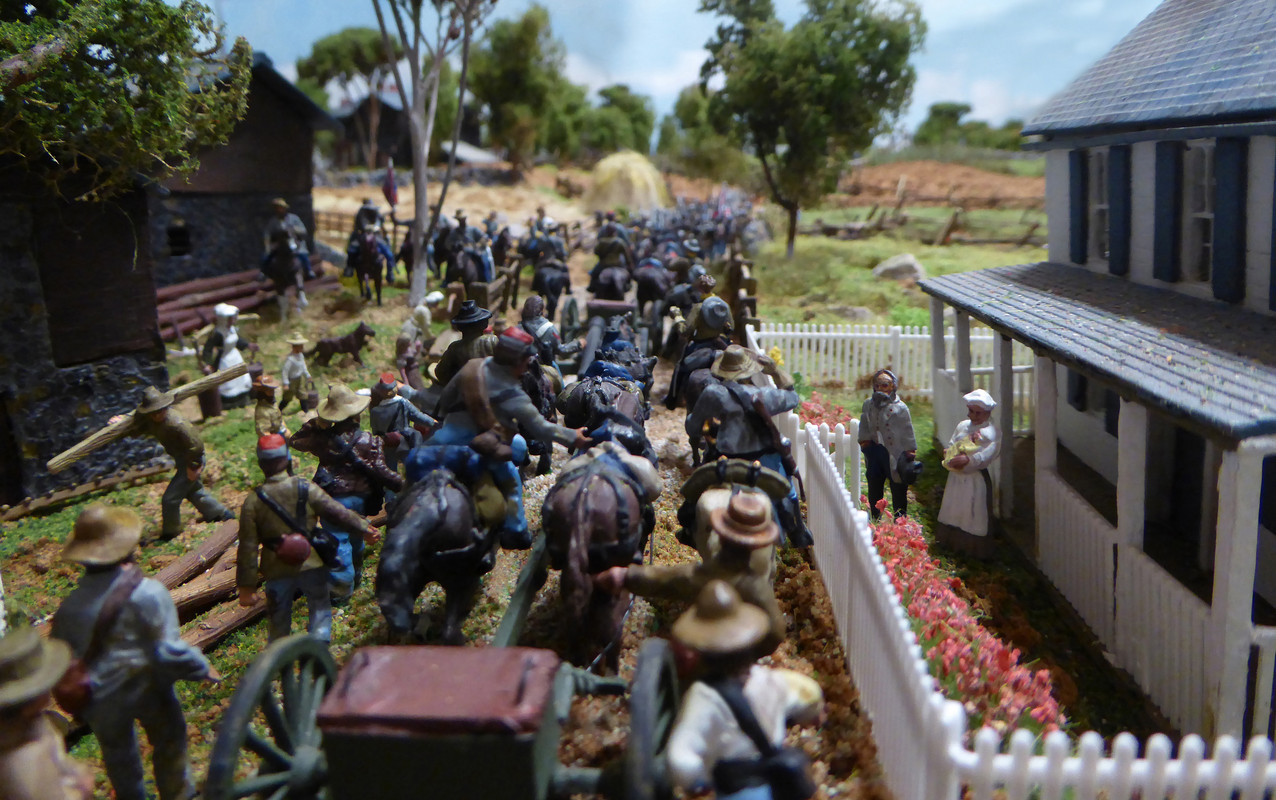 James Longstreet and DH Hill visit Henry, ‘stovepipe’ Piper and his family to warn them of the coming danger. 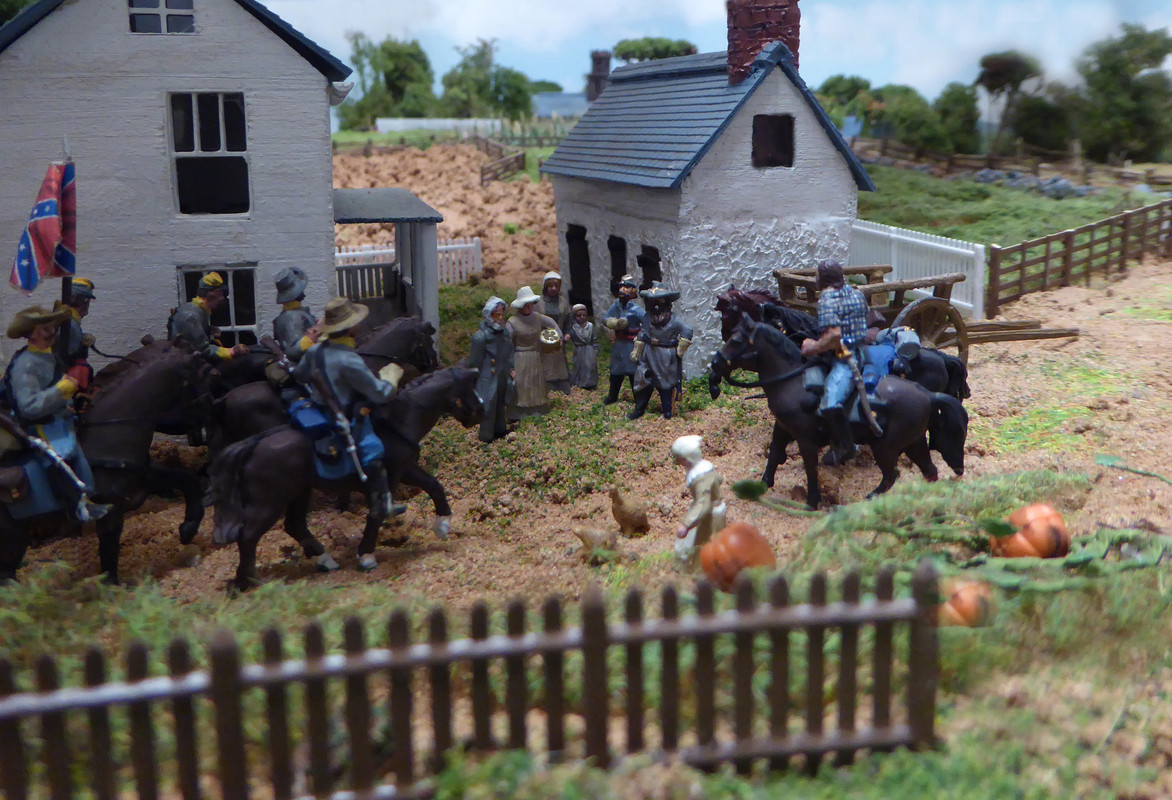 After providing dinner the family will depart to Samuel’s (Henry’s brother) Mill north of Sharpsburg for safety.

David Miller and his family leave their prosperous farm on the 16th along with his cows to join his father Colonel John Miller at his Hauser ridge farm. 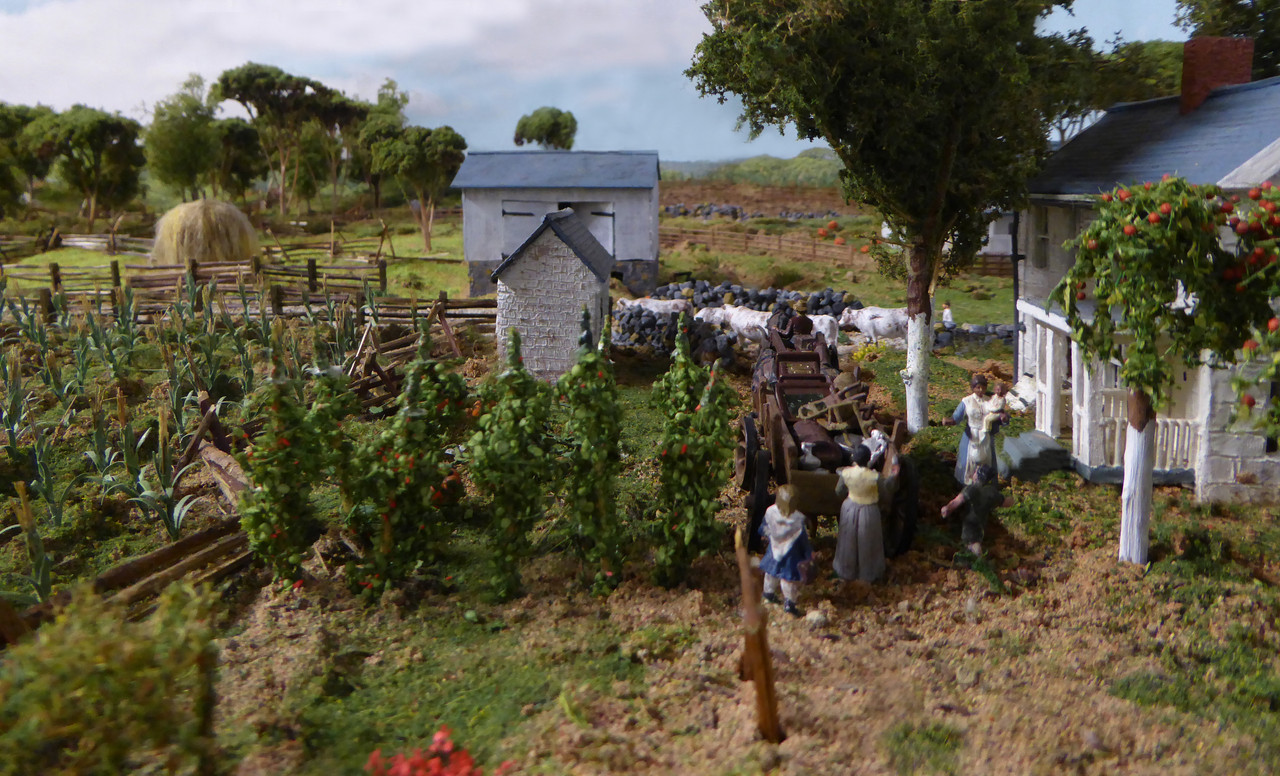 Robert E Lee inspects his troops positions. With eighteen thousand men opposing an unfolding Union deployment of seventy five thousand he was counting on the arrival of Jackson from Harper’s Ferry and McClellan’s timidity of action. 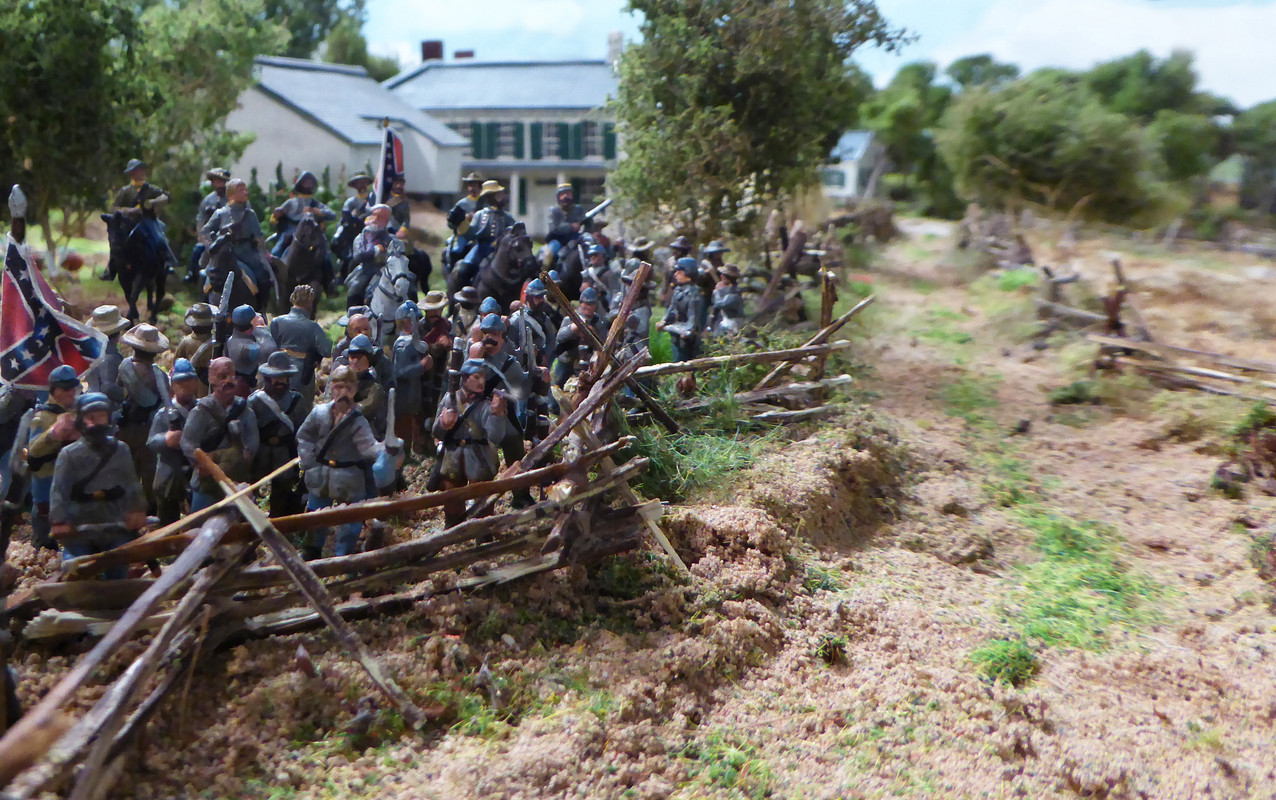 George Brinton McClellan inspects his troops on the 16th, wasting a whole day with battlefield preparations and withdrawing Hookers 1st Corps from Ambrose Burnsides command. A source of irritation to Burnside putting him into the sulks. 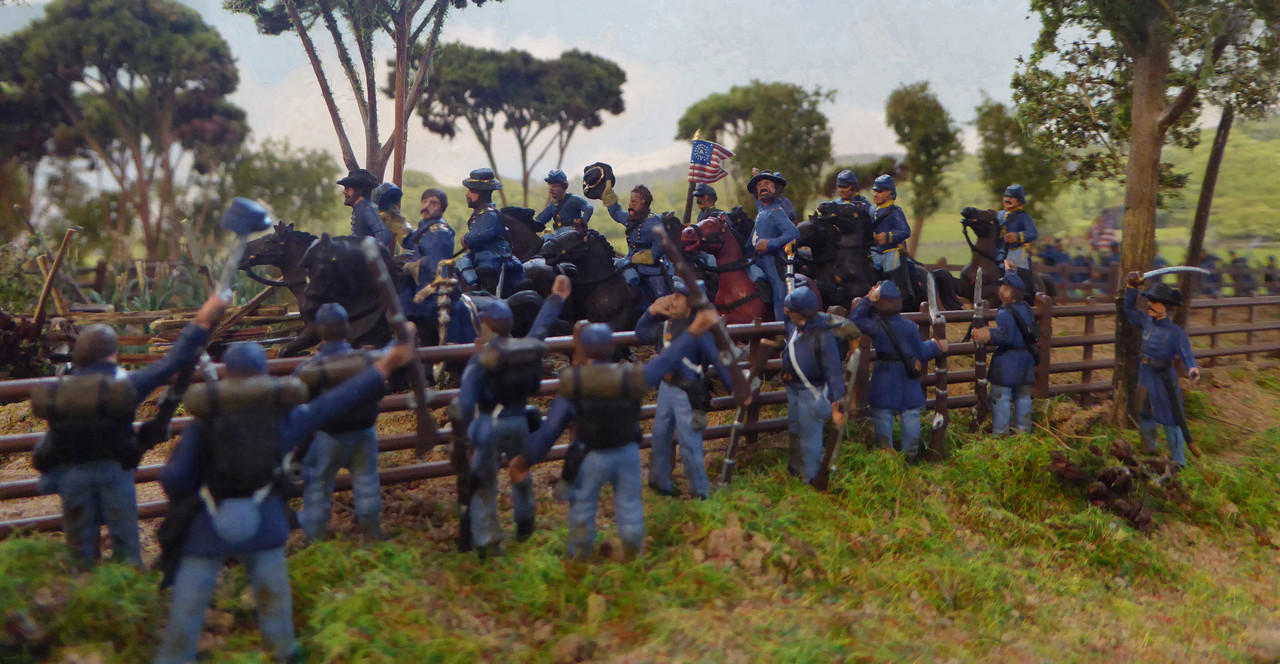 McClellan is intending to smash Lee’s left flank with massive echelon assaults on the 17th and to this effect Hooker’s 1st Corps has crossed the Antietam to the north and is positioned astride the Confederate flank.

Hooker’s troops skirmish with Confederates in the East wood. This action alerts Lee, now reinforced by Jackson, to the Union presence on his flank.

As the light fades the scene is set for the next days battle.
Nach oben

Oh, i love it! Indescribably beautiful, the photos are once again breathtaking.
Beste Grüße,

Unbelievable Chris what you present us here ...
The whole thing feels incredibly realistic to me.
One automatically feel drawn into what's happening around Antietam and believe that one is back in the Center of happening
Again you captured with your brilliant work the spirit of time.
LG Egbert

Great intro to it all: amazing research pays off once more I would say!
This is one of those you can spend endless time observing the details. Great use of civilian figurines - special mention for the farms/farmer communities depicted here. Great use of the IMEX sets (I'm currently using the same sets for a project of mine

) and great conversions as well.

I also want to mention the ground work/landscape and various cultivation displayed here:nice pumpkin patch!
Can't wait to pour over the rest.
Keep posting, and congratulations on the research/presentation of the history surrounding the diorama.

p.s. Are the command figures - Lee for instance - in metal ? I can't place the sets/manufacturer, but then again I'm no expert on the figures made for this conflict.
Nach oben

Lee had badly damaged his hands and hence the sling. I modelled him specifically as this version does not exist anywhere else to my knowledge.

There is lots of information in the work in progress section on the figures and conversions.

Hi Chris my compliments to your latest work and first pictures of this new battle.

I have to say you caught my fascination by the realism and choice of your camera positions again.
In my head there is, after a lot of 'behind the scenes' pictures coming from you, a very clear impression of your pretty small garage where you build al of this. Its incredible to notice there is no feeling at all of that garage in these pictures!
Also I see, like with your Quatre Bras and other battles, these dwarved houses again (scale landscape size footprint or something like that you called it once).
We should think such things make it all unrealistic and unbelievable.

Well done!
For some reasons which must be your skills and talents after so many years you succeeded in drawing me INTO YOUR MINIATURE WORLD.
I experience a credible, rural feeling, of real people in a real landscape, living there, or exploring the terrain and meeting each other.
The communication between the different groups of people is so good in your diorama.
Horsemen meeting footsoldiers, chearing to another or exchanging information about terrain and the enemy.
I can feel the tension before the cruelties of battle will start.
KATALOG https://crynsminiaturen.nl/
Nach oben

Just back from Scotland, and what a pleasure to return to this!
Nach oben
Antworten
33 Beiträge