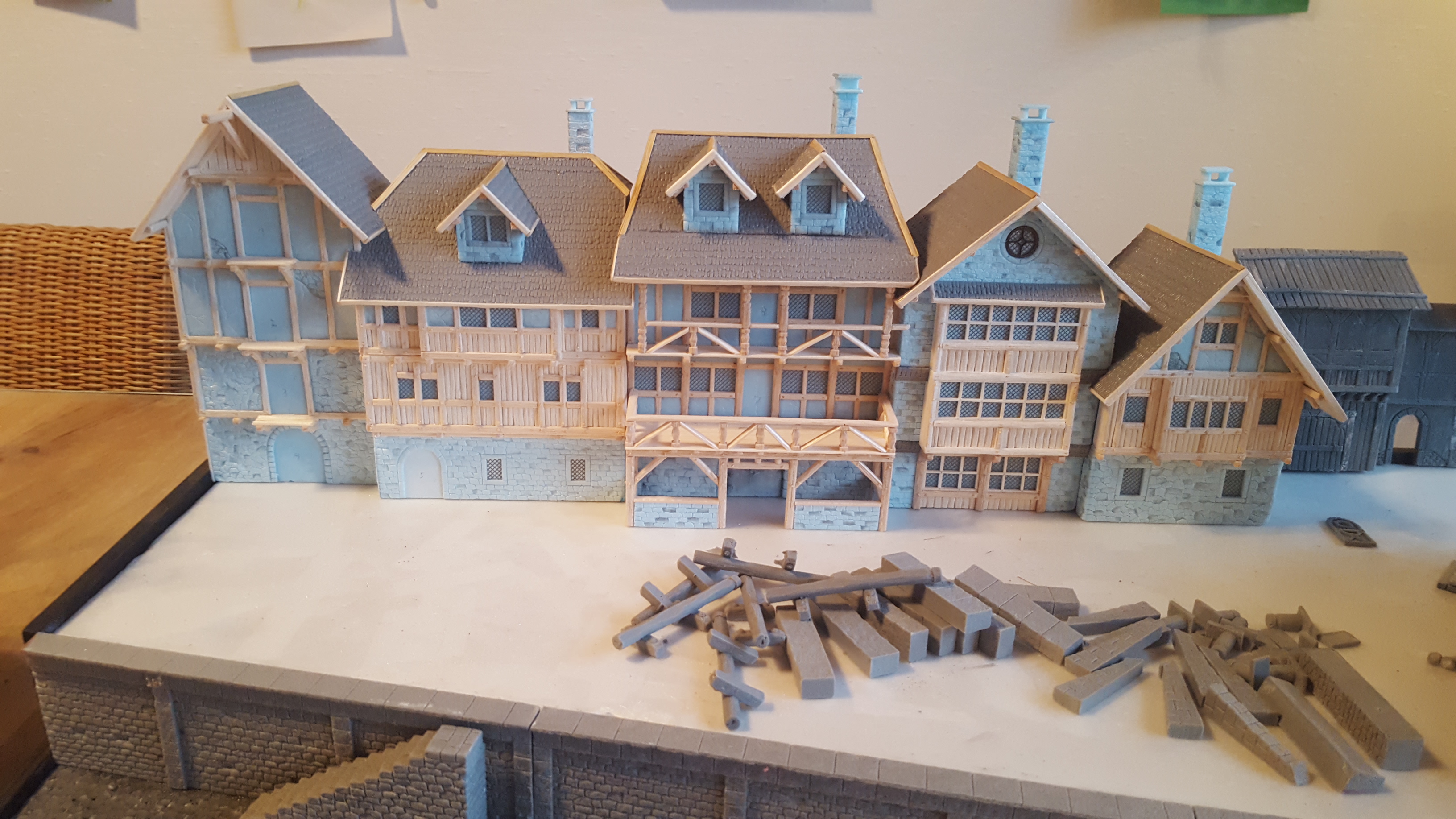 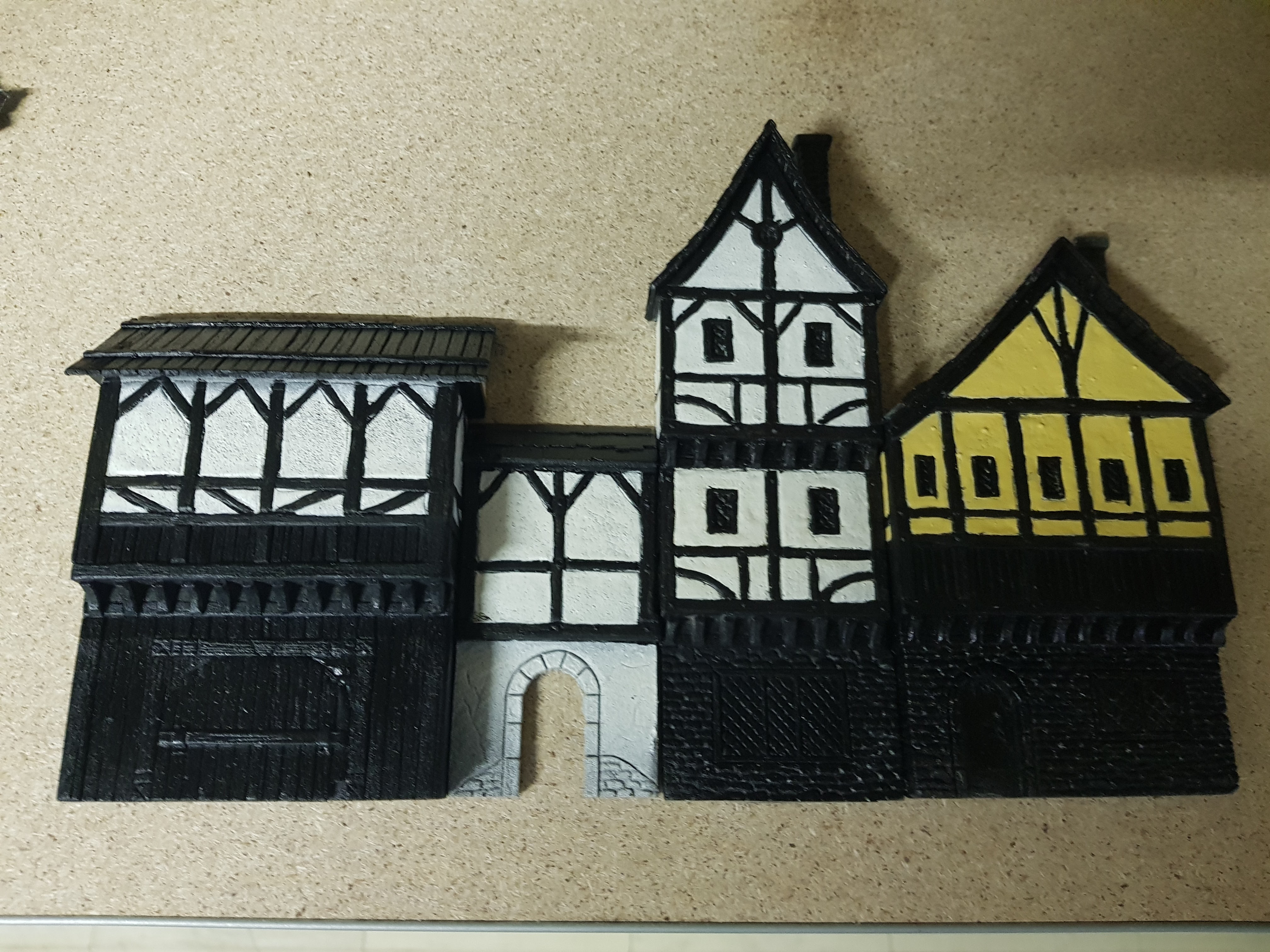 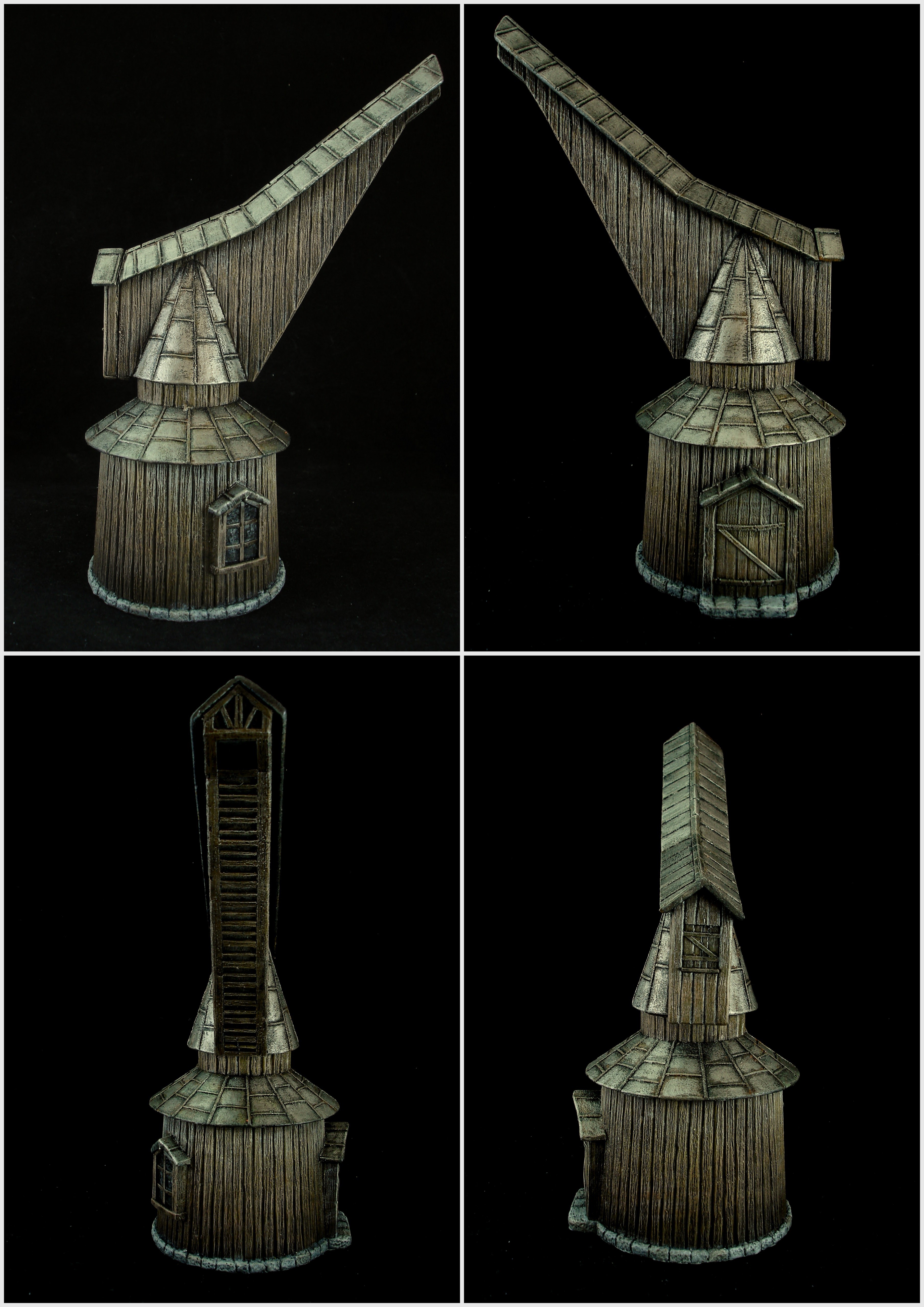 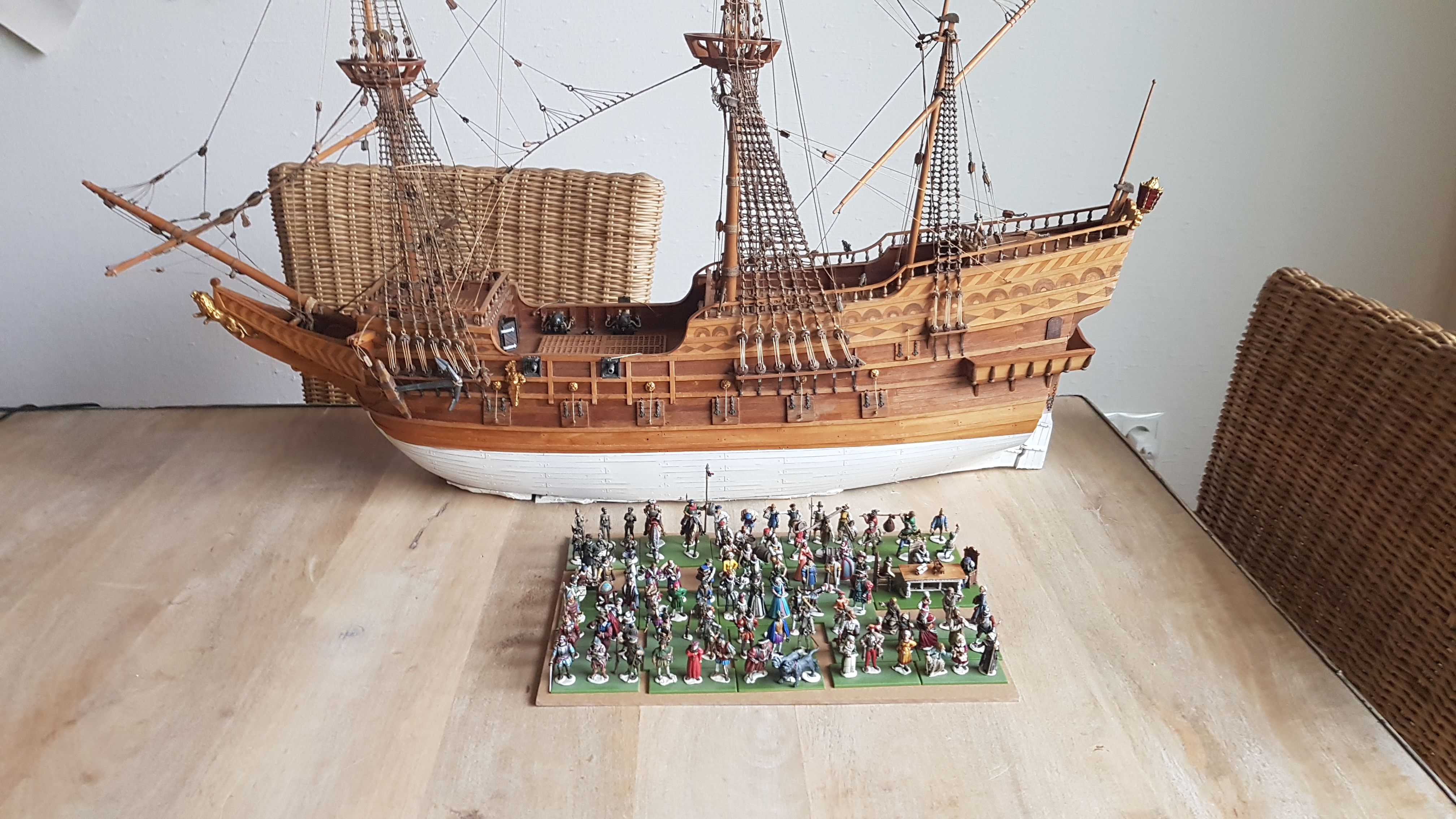 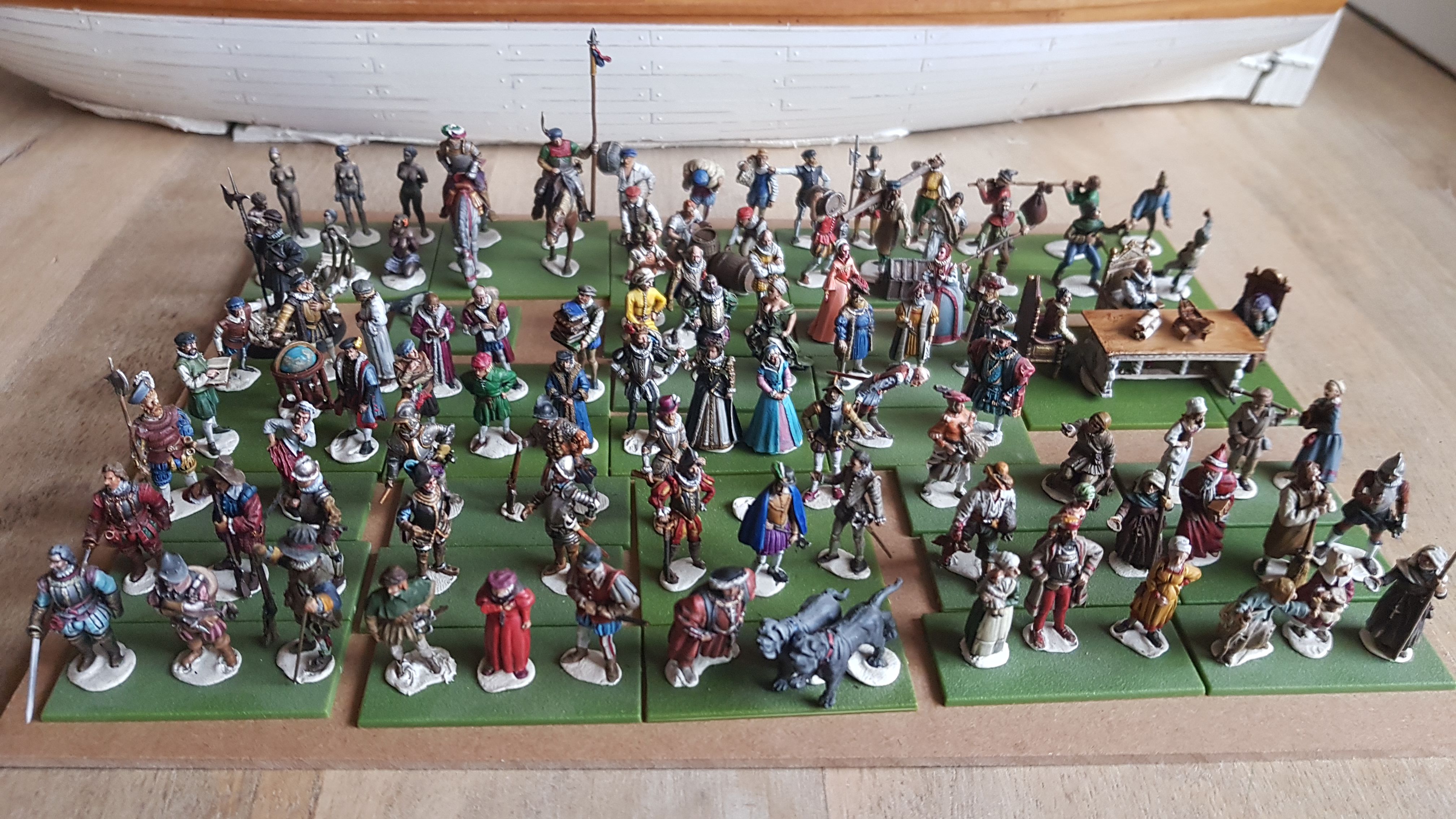 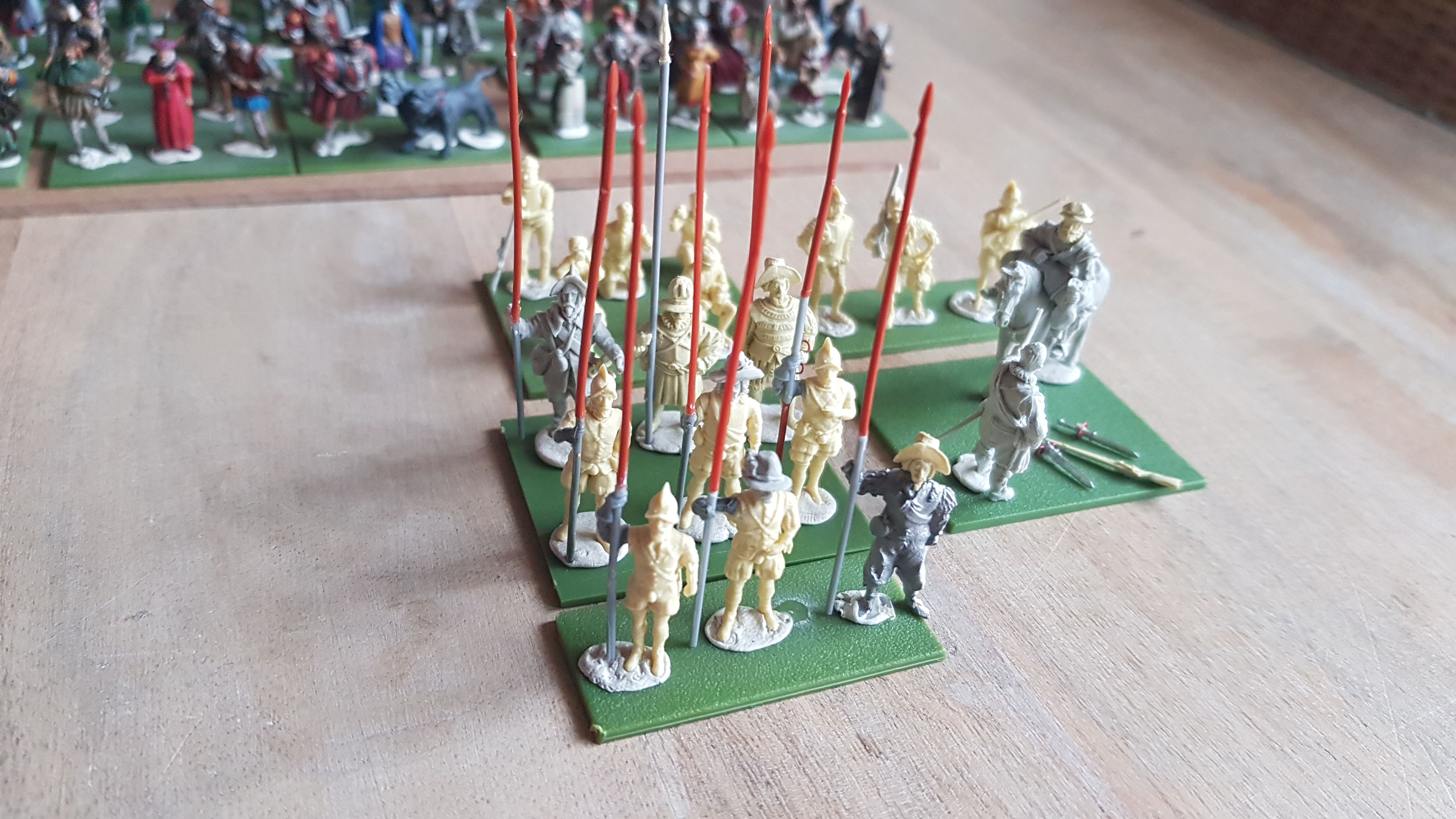 I am impressed by your buildings. A very good combination of styrodur and wood. Very good ways to combine stonestructure and woodpattern.
And I love your painted figurines too. Very lively but realistic colors. One of your specialities.
Nice harbour crane.
And those conversions of the pikemen, making so many new poses. Do you make them yourself?
I look forward to see the development of this diorama.
Good luck with all of it.
Regards,

Please reply in German if you want to, as you know I can read that too.

The Renaissance Harbour of 1580 has my specific interest. That is because in the period of 1568-1580 the Dutch Revolt against the Spanish Habsburg Empire was in its first and most heroic stage. In those years, important medieval cities of Holland were besieged by the Spanish like Haarlem, Alkmaar and Leiden. This is when the Dutch Republic was created and seafaring was an essential element of the Dutch economy and identity.

There is a lot of information to exchange, I did a lot of research since we met at 3. Dioramica and some of this information will be of interest for other forummembers too.
But let me start with a picture of your ships.

Here is my answer to your question of feedback:

As I understood, the large ship is for your diorama and the smaller ship (Halve Maan/Half Moon) is uncertain what to do with it.
In my eyes these ships look good for the period. In this era the development of sailingships went very fast.
The details look excellent, especially of the larger ship.
Both ships lack sails, I wonder how you will solve this.
For the Half Moon is would say: the railings of the midship and the fore castle look too massive. I would replace this for finer wooden railings. The bigger ship has more elegant an thinner railings.

Also ships like these were usually painted with colorfull decorations.
Both shipmodels show where and how it could be colored.
My imterpretation is this: Because these wooden models come from a scalemodeltradition that is focussing on shape, function and materials but not on color and figurine crews, the designers of these modelships decided to make the decorations colorless and modest, only to show the pattern but not attrackting too much attention.
KATALOG https://crynsminiaturen.nl/
Nach oben

Today part two of my response to your questions.
This topic is about building a 16th-17th century coaster in Dutch/Northern European style.
Researching, building, molding, casting a ship like this, and make manuals for assembling and rigging, takes me about one year. That means all my other activities on ancient ships will have to be layd down for a whole year.
For that reason, the first thing I do is trying to find out if such ships already exist in our scale since I do not want to produce what is already available.

Now you send me some images of what the Dutch call a Wijdschip or Boeier: De image bottom left looks like a gunboat with shelter walls.

And of a Statenjacht which is a pleasure boat for the rich elite or for the admiral of a fleet.

At 3th Dioramica somebody told me about the Dutch firm Artitec from Amsterdam and a diorama called DE REEDE VAN TEXEL build by them, which I heared of but I had only seen it on the internet. So this summer I went to the Waddenzee island called Texel to visit Museum Kaap Skill.
In their underground floor they have the biggest, best and most beautiful maritime diorama I have ever seen.
You must go there, Michel, although all of it is in scale 1:87 (H0 scale) and the historic period is focussing on the period 1660-1680 with Dutch ships of the Verenigde Oostindische Compagny, the West Indische Compagny en the great sea battles with England. But all the ships you have in mind are present and they are properly crewed with 17th century sailors designed by Artitec.
https://kaapskil.nl/
KATALOG https://crynsminiaturen.nl/
Nach oben

Museum Kaap Skill did not have any books or information about who build this masterpiece-diorama.
So I searched the internet and found out those people work very close to my house in the Amsterdam Harbour area. So I called them and both of the owners invited me for a visit and a tour in their fantastic scale model factory including computerdesignstudio and resinforgery. It turned out to be a company with 20 Dutch empolyees and many more abroad.
I knew their products because of their Dutch houses, which are selled to WW2 modelers and gamers.

Since ships, like houses, are often acceptable in a slightly smaller scale when working in 1:72, it would be worth for you to have a look at the historic 1:87 ship models Artitec has already developed.

Most of the bigger ships that are displayed in Museum Kaap Skil at Texel are not for sale (yet) but the company is planning to release more sailors that may be available in scale 1:72 too.

Some smaller boats, like the Dutch traditional fishing boat, are for sale already, and you can find them in several online shops. These boats depict shiptypes that have been used upto the 20th century, but the designs go back to renaissance times so they will not misfit your 1570 diorama.
The boats are resin cast model kits.

Another Dutch company I discovered this summer is KOLDERSTOK from Dordrecht. Its a familycompany and they sell wooden model kits, some of them in scale 1:72 which may be interesting for you too, like the Fluytschip which was the most common Dutch trading ship on the Ostsee during the 17th century. And the Batavia which real size replica can be seen in a museum in Lelystad, Flevoland, Netherlands.

Next post will be about late 16th century Dutch sailors