Built around 1835 and located east of the Rodman bridge, en route to Sharpsburg lies the Joseph Sherrick Farm, adjacent to the Otto Farm.

This picture was,taken four days after the battle by our friend Mr Gardner. 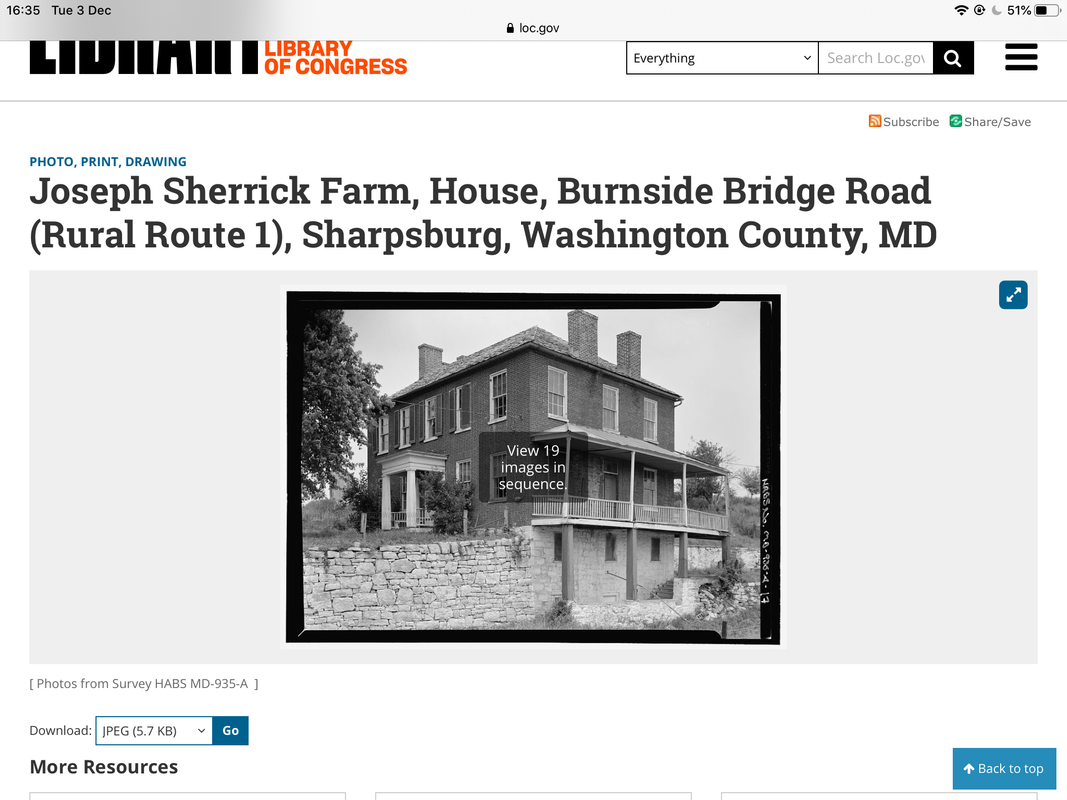 Joseph and Sarah Sherrick abandoned their prosperous farm upon the arrival of the Confederate forces whereupon, being between the lines it was looted by Union forces prior to the battle.

However, $3000 in gold, hidden by Joseph in a stone wall survived the engagement!

The farm house is a brick affair with a substantial cellar complex exposed on two sides.

The NPS has recently renovated the property to its Civil War appearance. 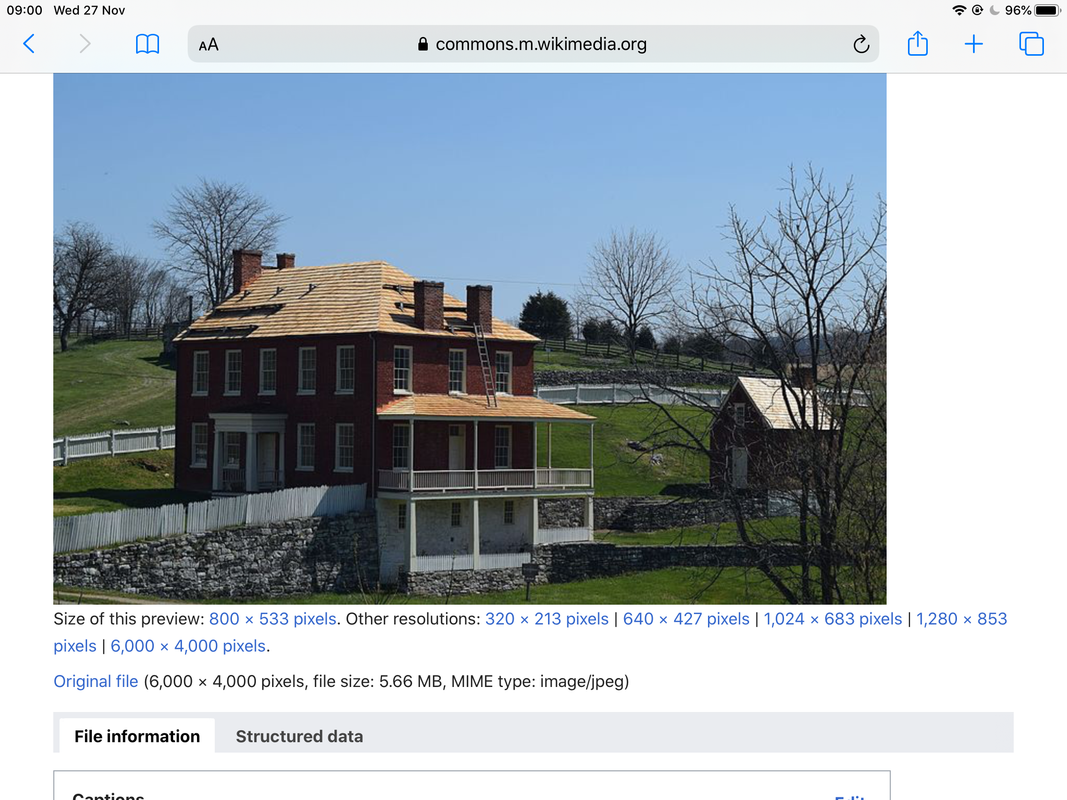 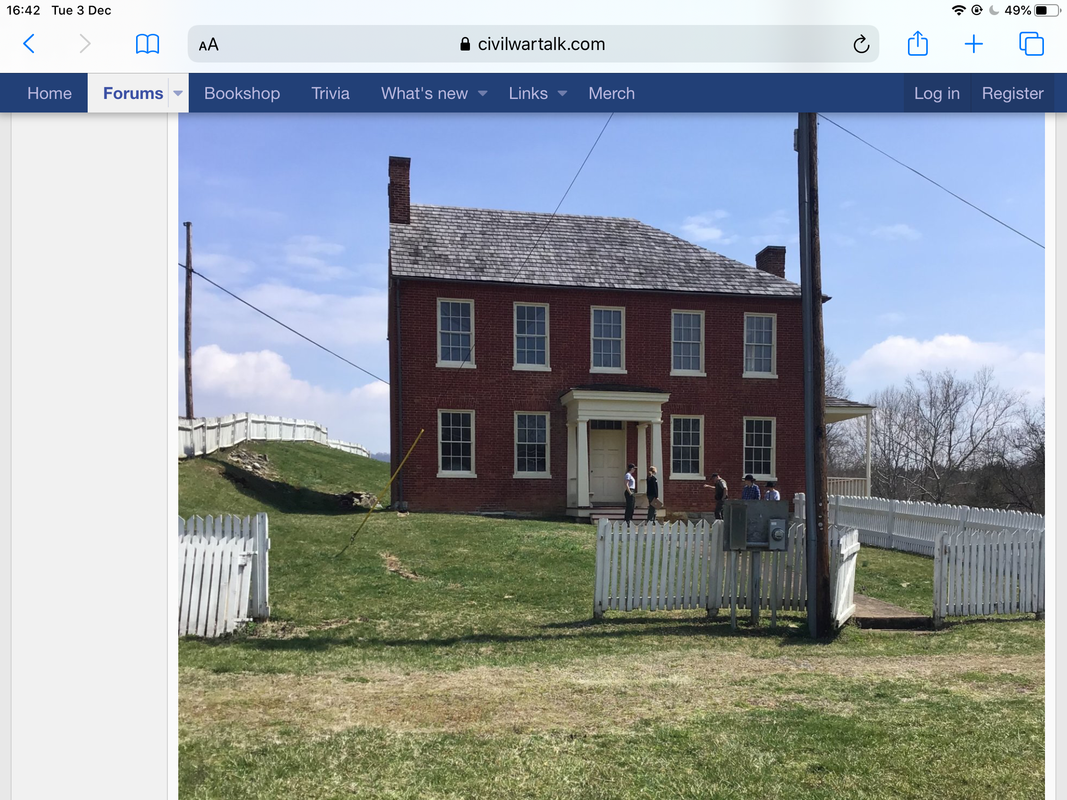 The property features an unusual roof with twin rear chimney and a wrap around veranda to the side. 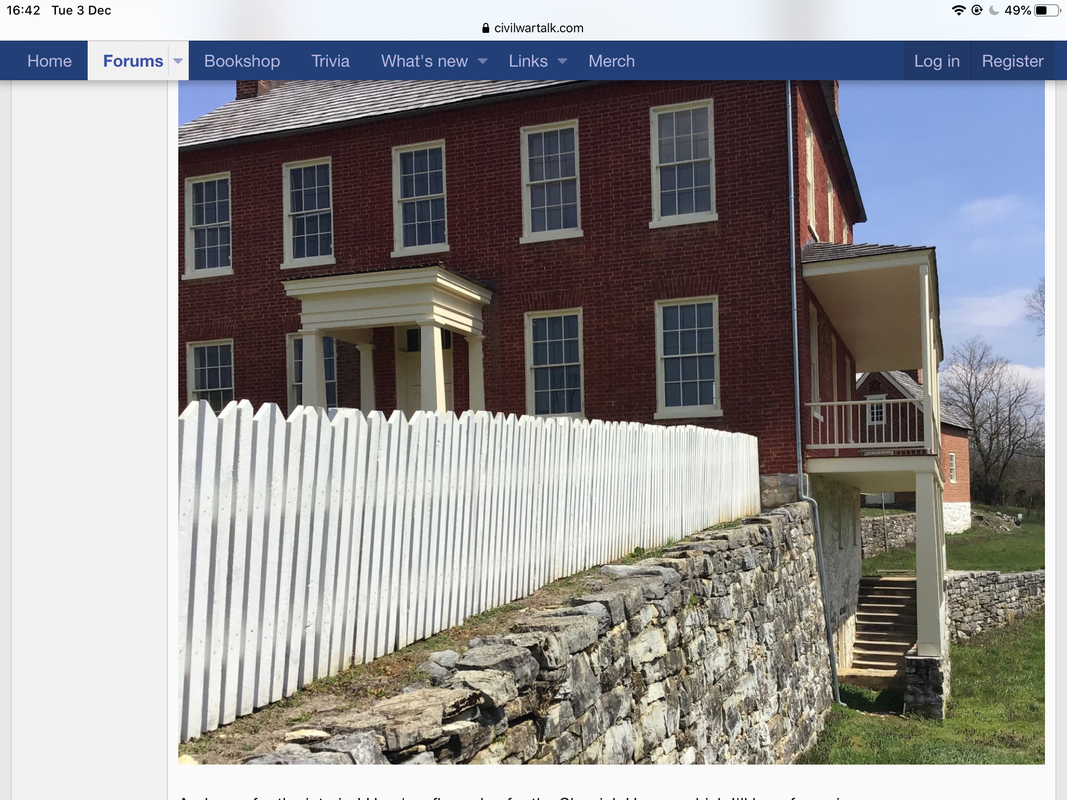 Once again the LOC has some wonderful reference material for the amateur builder. 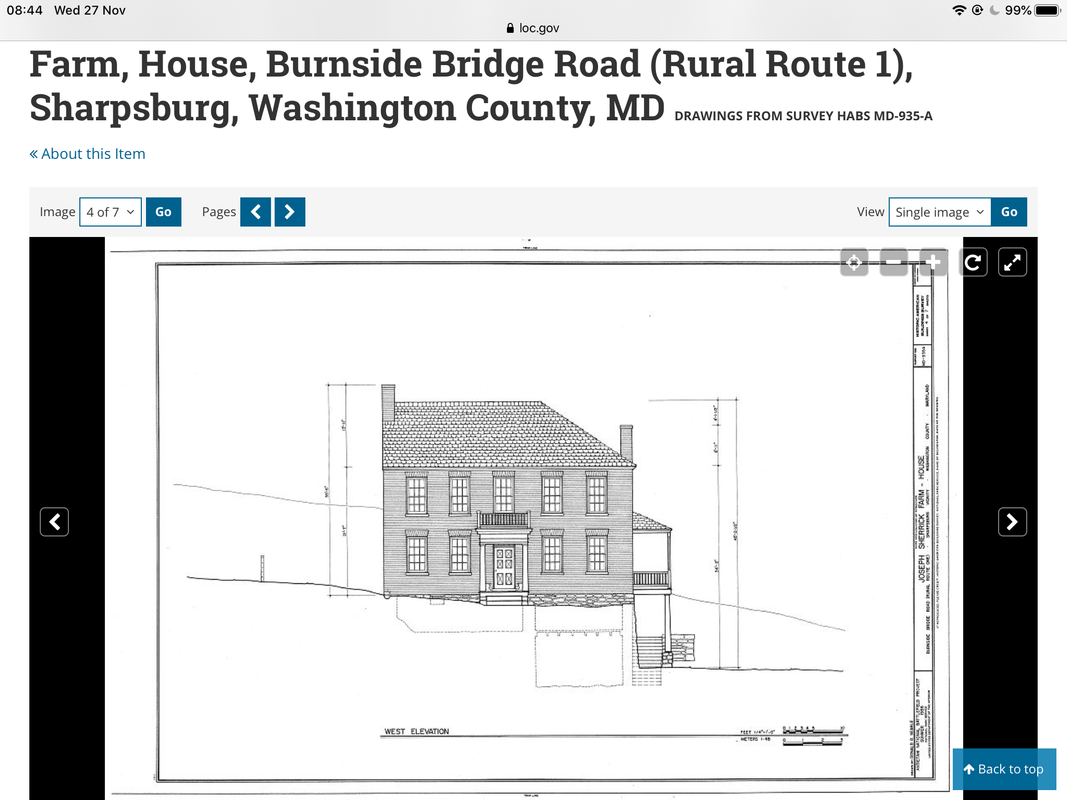 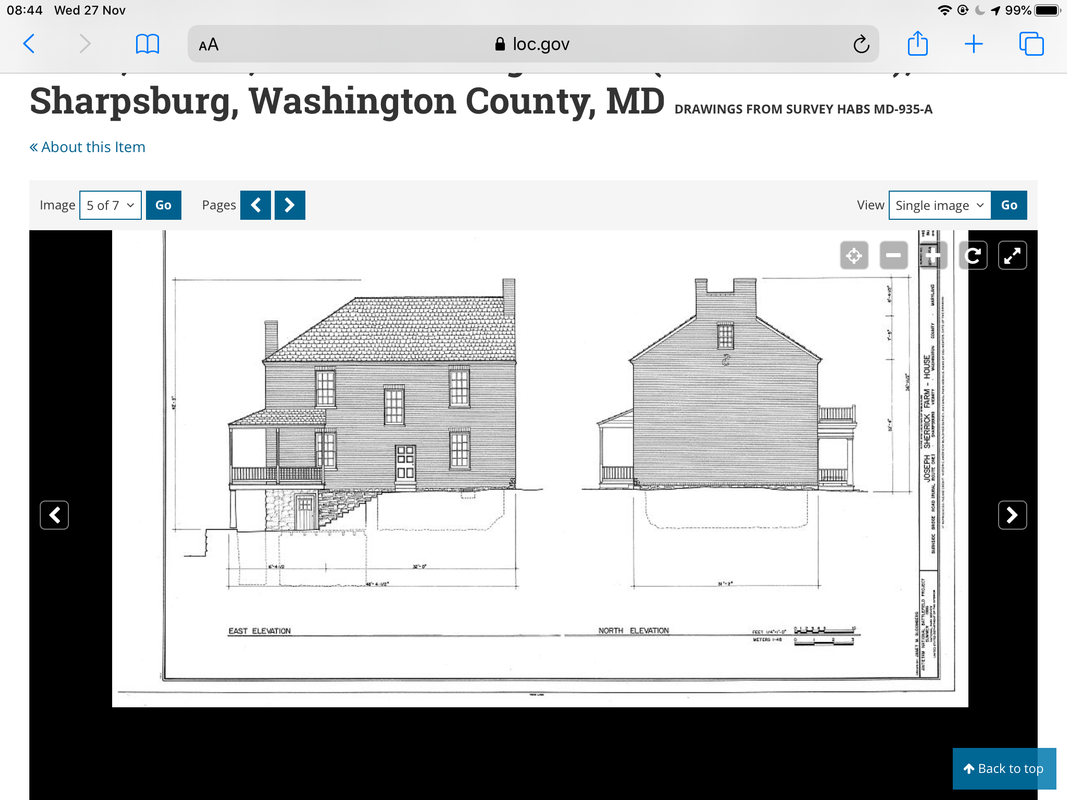 I constructed the main property as per usual and then built the veranda separately.

The basement area has been constructed on two sides as my sand table will provide the ‘hill’ for it to sit in.

I have commenced the painting but there is still a lot to do tidying it up and putting it together.

Personally I am not sure about the width of the ridge tiles compared to the original. The camera never lies! 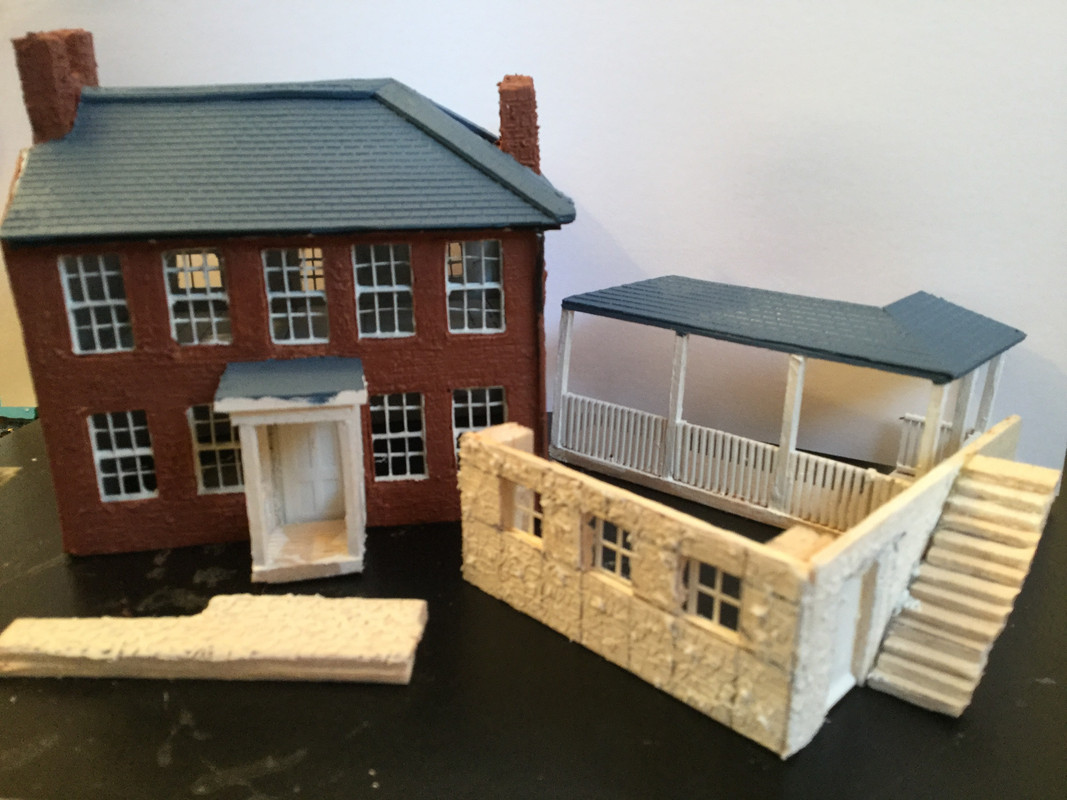 You have been working very hard. Great to see all new objects.

It must be a pleasure to find so much research material online, done for you by specialists and hobbyists.
Did you visit the battlefield or will you in future?

In our last correspondence here in this topic about the size of windows I missed your info about those windows being prefab lasercut.
That explains much to me. So the windows were first and the house 'build around' it, though in a smaller 'footprint'. Sorry for that.
Which makes me wonder if there were or are no smaller windows available, prefab lasercut?

Hello Mr C, good to hear from you and thank you for your kind comments.

Yes, it is lovely to be able to access so much raw material, especially from the Library of Congress.

However, you have to be careful with the sources and cross reference.

Many of these reports state the condition as at the time of the report and do not represent the 1862 reality. The Piper Farm is a case in point.

My wife and I visited this and many other battlefields in 2002. She is pictured by the Dunkard church earlier in the report stream looking lovely as always.

The next window size down was N gauge which are too small.

However, I am quite pleased with progress to date but there is much more to do before setting out the terrain.

Hi Chris, thanks for your reply.

Well yes I understand, thats a dilemma you were facing and you had to make a decision in that.
This must be why Wolfgang Meyer is ordering his own size of lasercut windows before building a whole village.
I have no idea what that will cost you.
My friend Gerard Boom (the foam cutting expert) has such lasercut machine and always offers me to do some lasercutting if I need anything for a reasonable price.
If you want I can ask him what it will cost.
But there must be lasercutters closer to your Brittish residence too.

I whish you much prosperity with your great historic reconstruction projects!

That is a very kind offer thank you.

I have only a few more major buildings to construct thankfully and I think it will add to the project if the windows are uniform as seems to be the case from the photographic evidence to date.

There must have been a very busy carpentry business in Sharpsburg to make all these windows.

I am just starting the John Otto house which has fourteen at the front alone.

In the New Year I hope to start refurbishing my old ACW troops to bring them to an acceptable photographic standard.

Talking of which....A very Happy Christmas to you and your lovely wife.

The property is largely finished but as usual my ‘friend’ the camera has highlighted a few errors.

I will sort these out as I progress onto Mr Sherrick s neighbour, John Otto and his des res enormity.

The rear of the property will be buried, as per the original into the hill it will sit on. 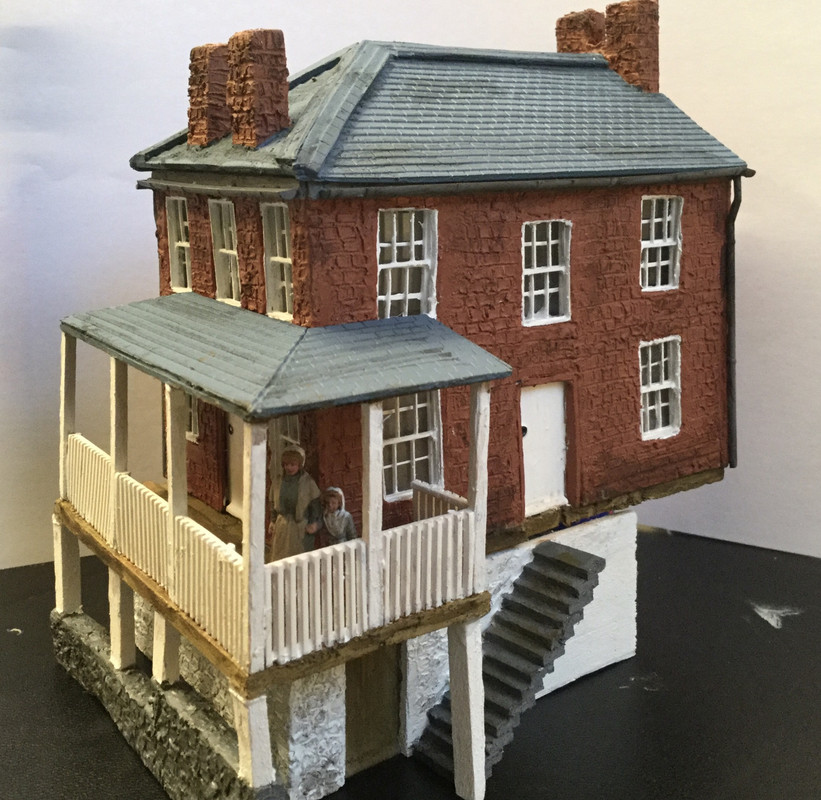 The harvest was well underway when the opposing armies approached Antietam.

Hay/straw was stored in the form of ‘straw stacks’ and the wonderful Cyclorama ‘ The High Tide of the Confederacy by Paul Philippoteaux ( of Waterloo fame) has examples for us to see. 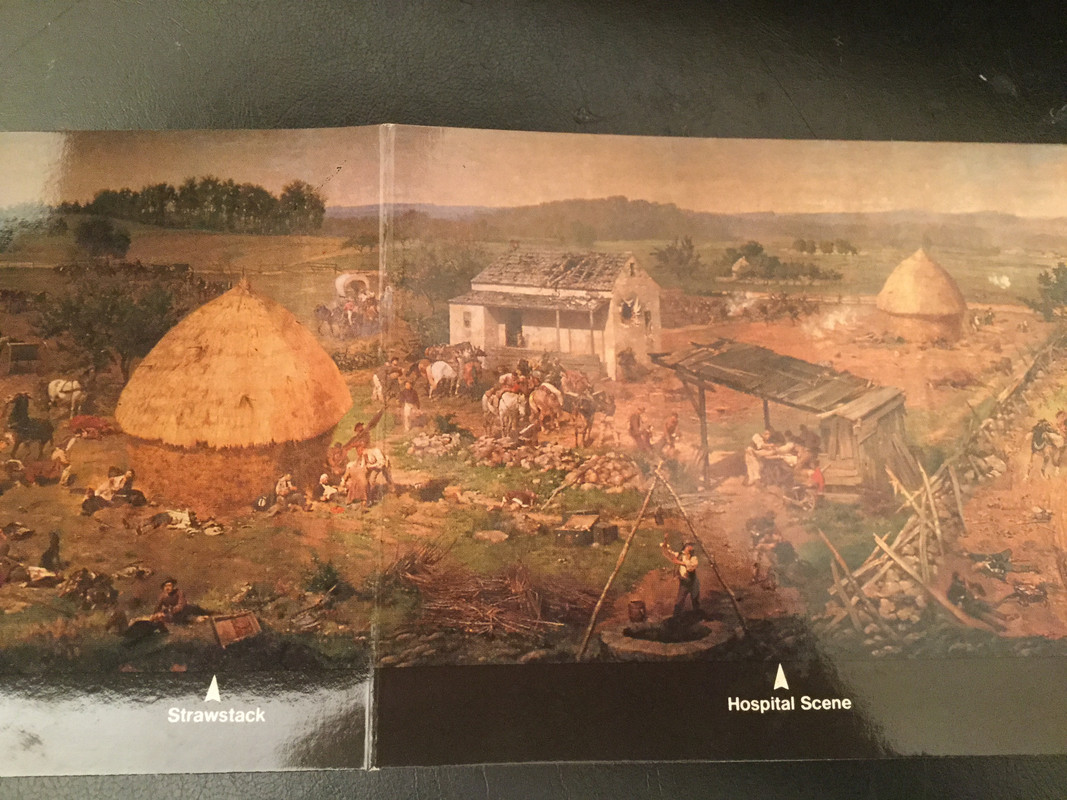 I used card formers and then stuck woodland scenic straw to them. 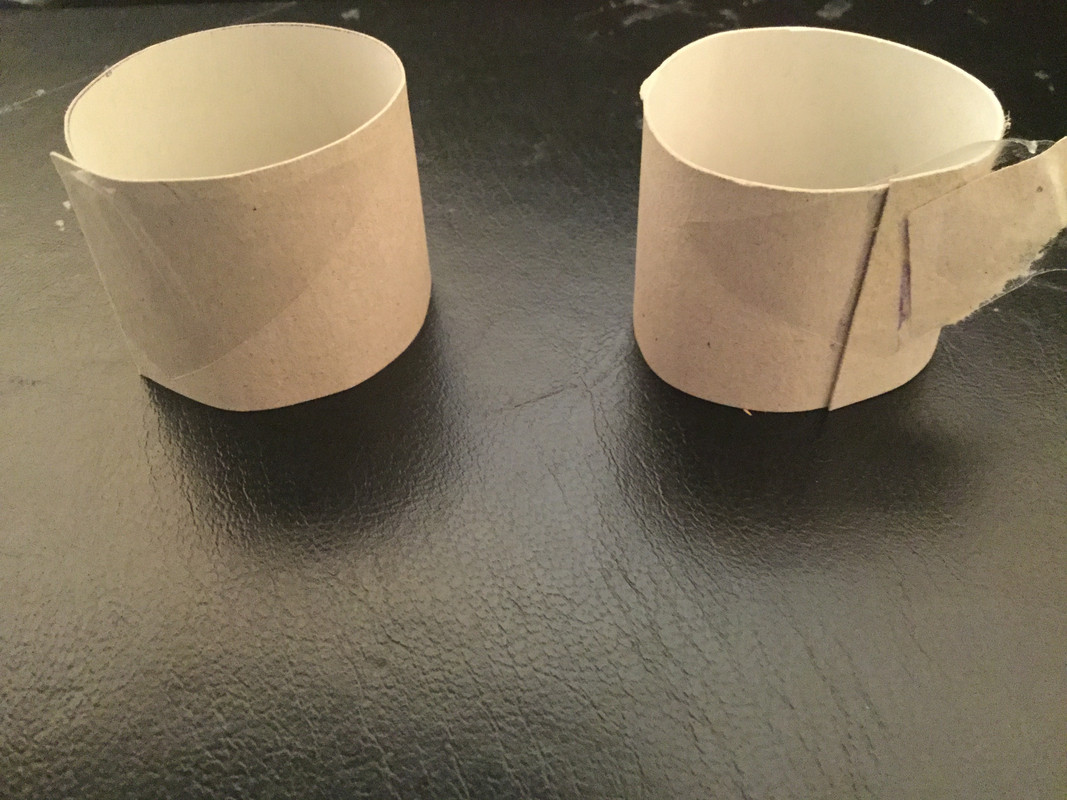 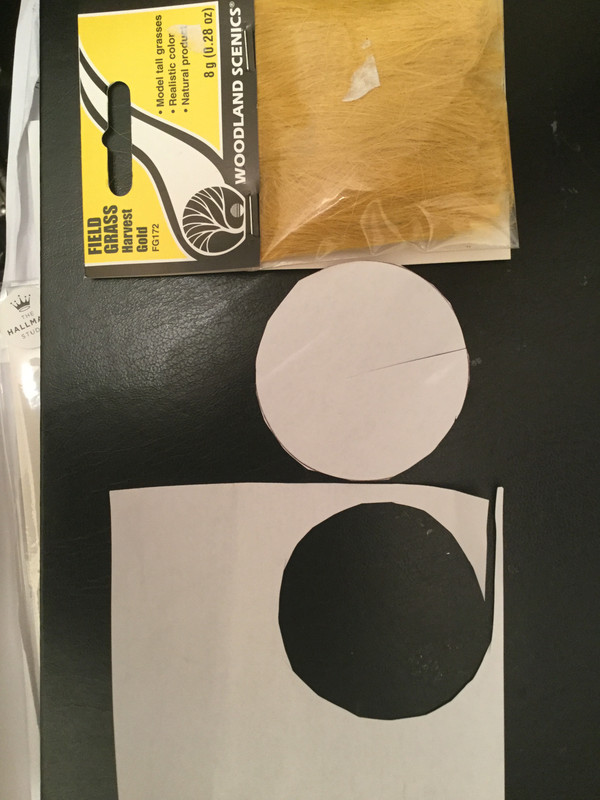 The stack is then trimmed. 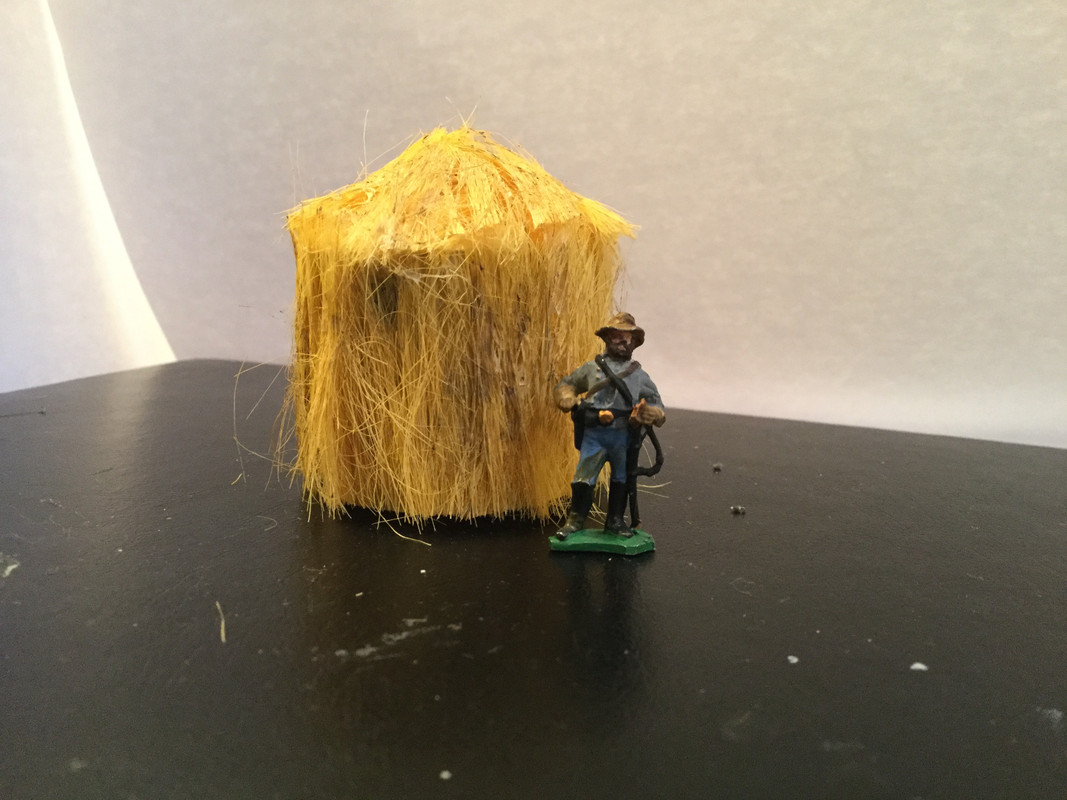 I am of the opinion that the straw is too yellow and have used a grey wash and umber ink to tone it down.

Still a work in progress I think, but it’s a start.

Located opposite the Sherrick Farm on the Burnside road leading from the Rohrbach bridge to Sharpsburg sits the John Otto Farm. 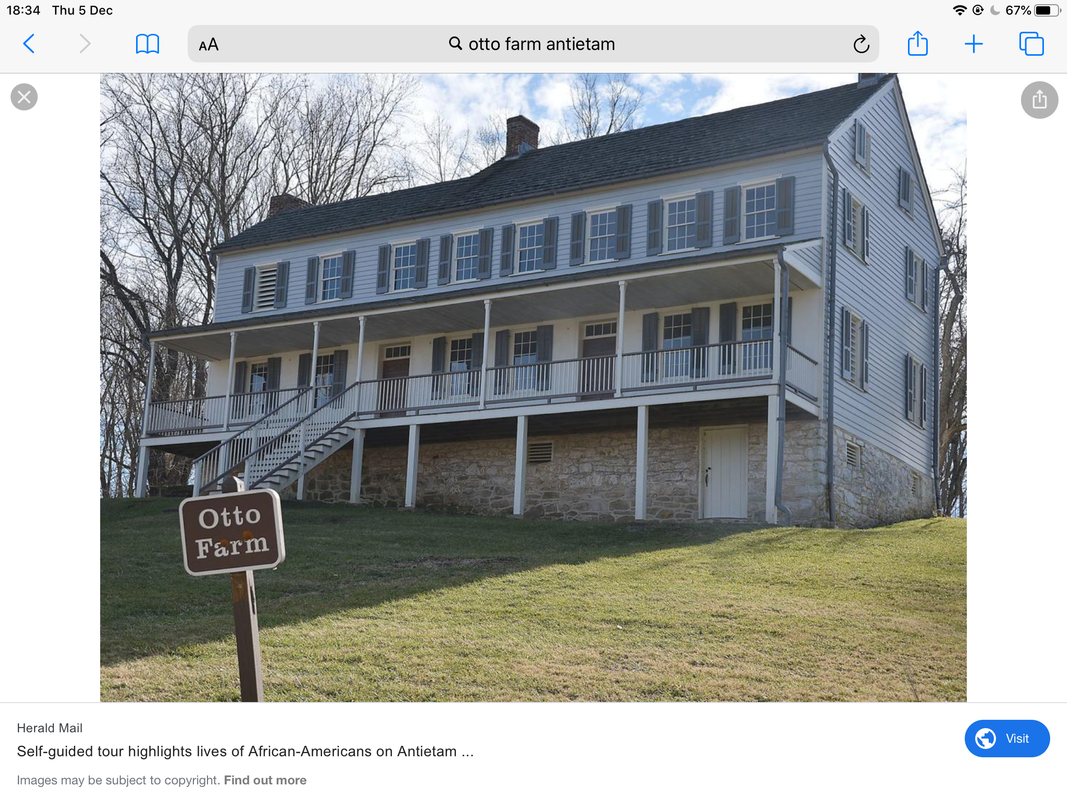 Built in approximately 1790 in the antebellum style, the farm stayed in the family until 1976 when it was sold to the National Park.

The original property, once again, is massive.

The LOC is a powerhouse of detail following their documentation of the property. 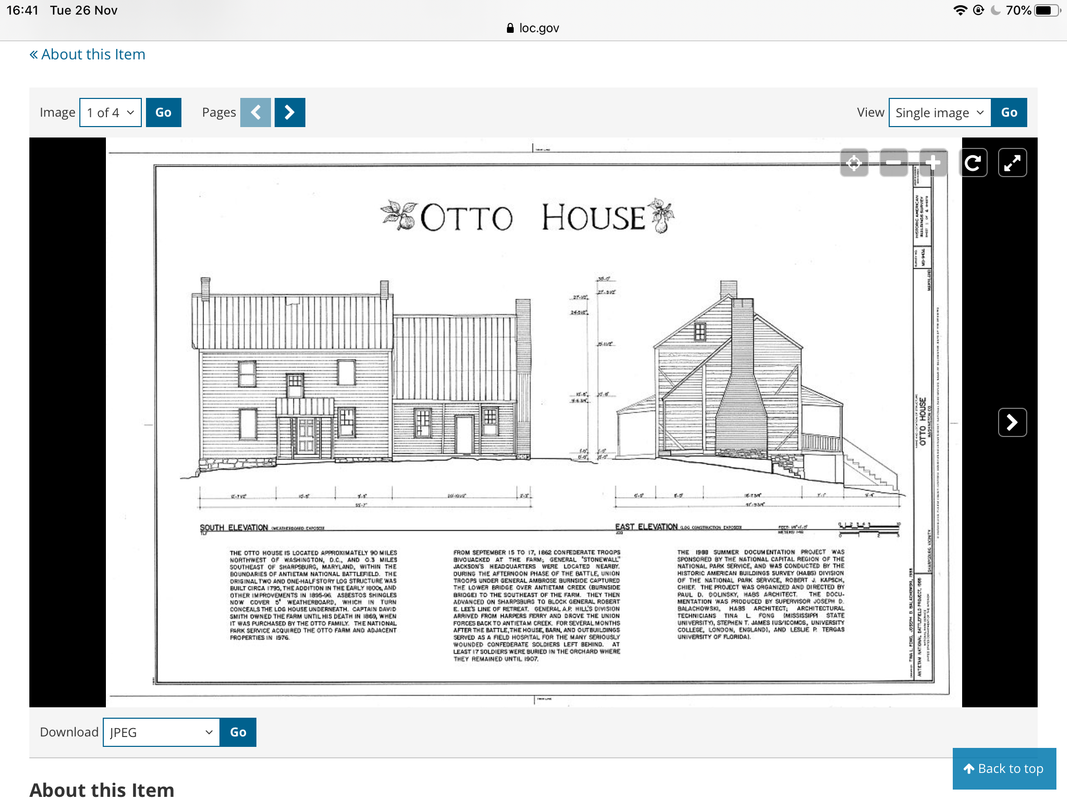 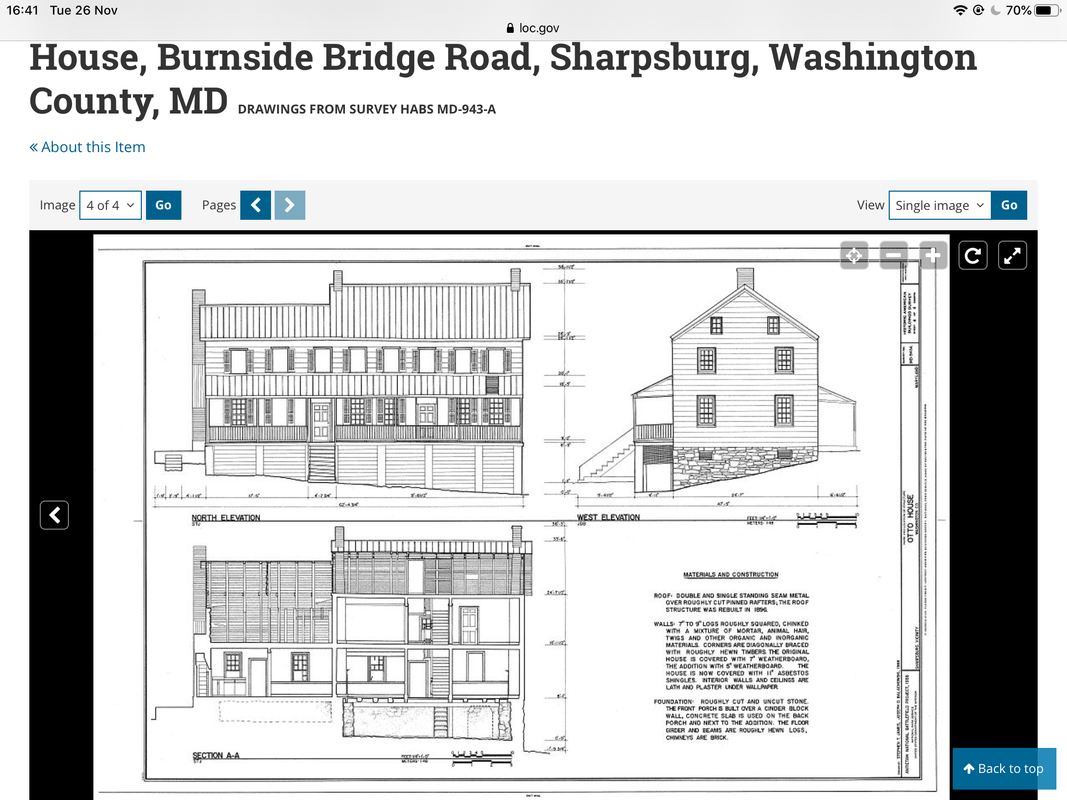 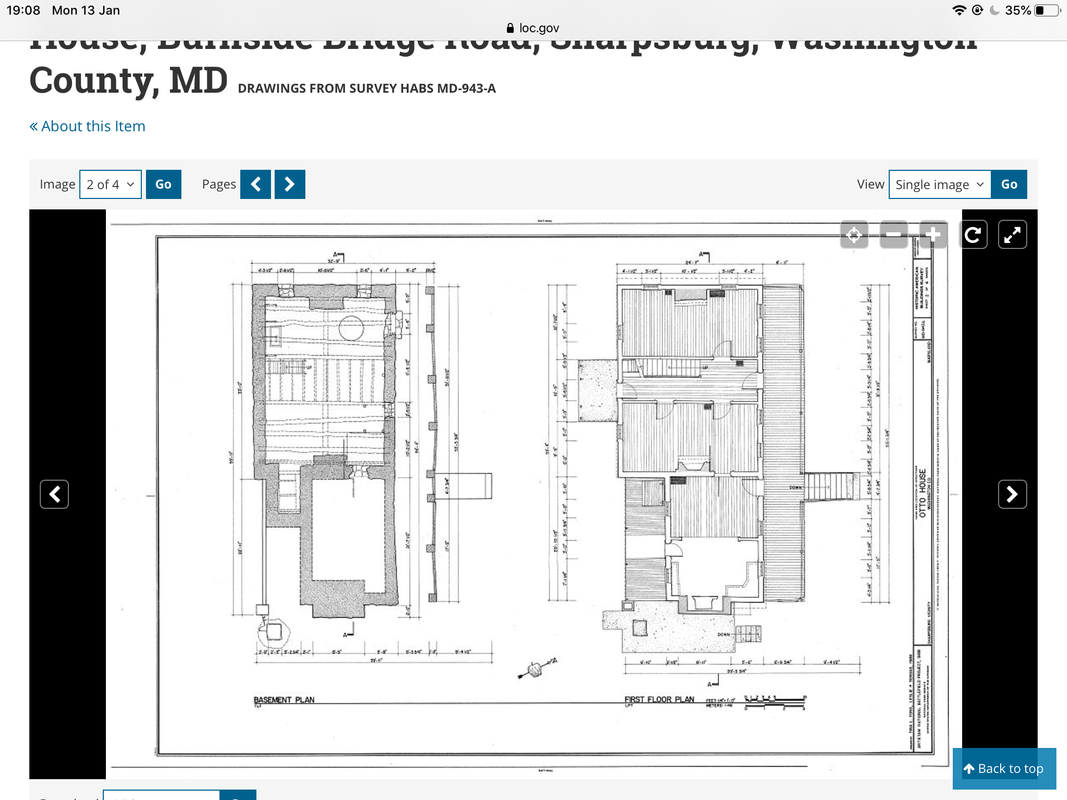 I considered the size and have decided to omit the shutters and therefore reduce the length of the model.

I hope the purists will forgive me but I do not want to have a battlefield full of office blocks.

However, I hope that the ‘feel’ of the property will be retained.

I have temporarily stopped work on the building as I awaiting the railings to arrive in the post. 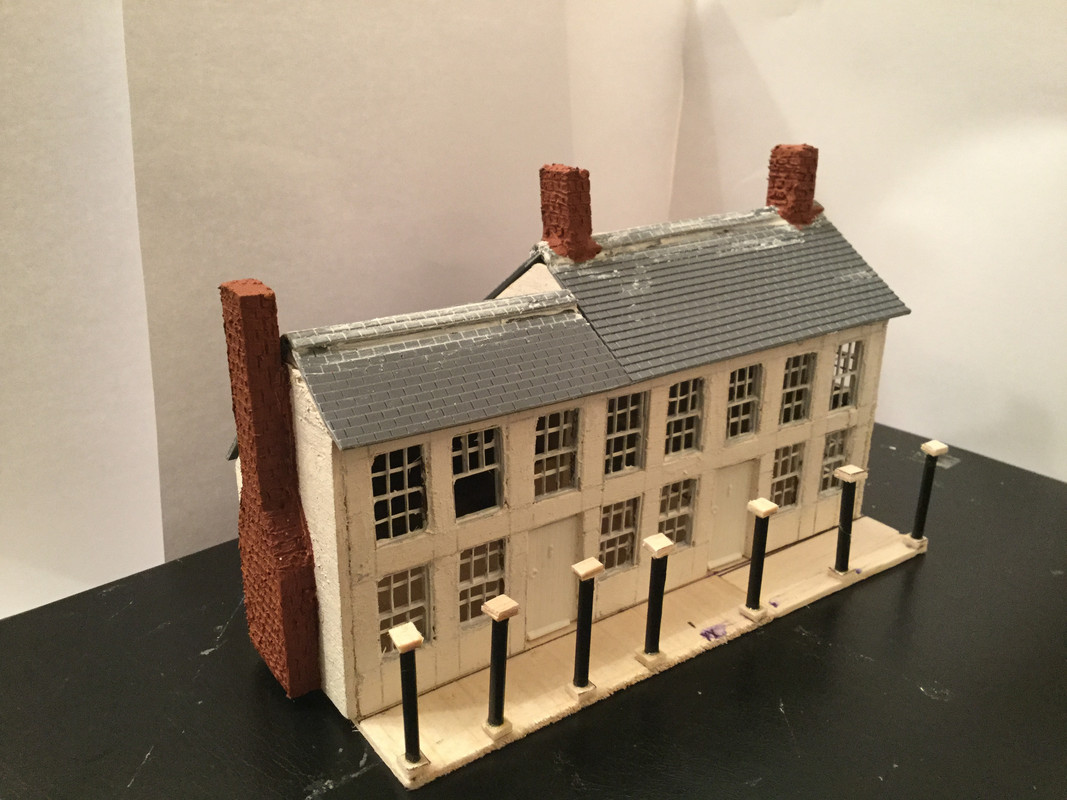 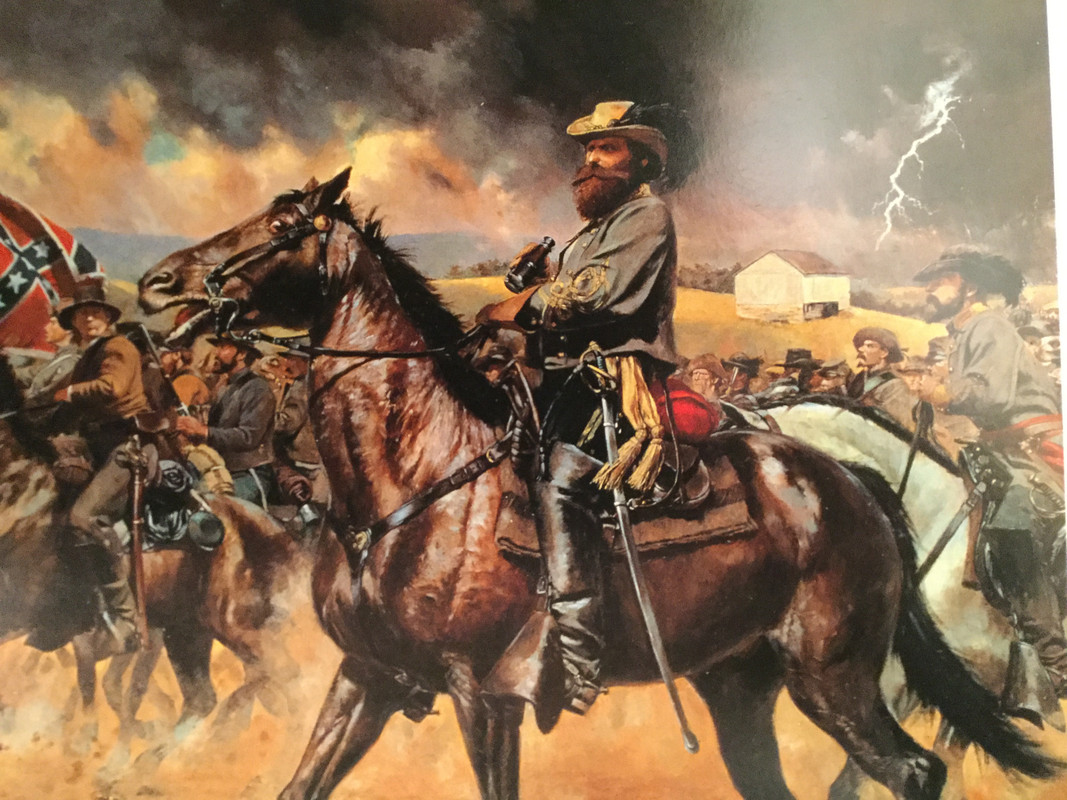 Having graduated from West Point in 1854 Stuart served with the US army in Texas and Kansas’s .

He took part in the Indian frontier wars and was also a part of the US force that captured John Brown at Harper’s Ferry.

Having resigned his commission as a Virginian, he then served under Thomas Jackson in the Shenandoah campaign. Jackson put him in charge of the 1st Virginia cavalry.

Stuart’s exploits in the Peninsular campaign was a public relations sensation and he was promoted to command the cavalry division during the following Virginia campaign.

Further success including capturing General Popes uniform and the pursuit of the fleeing Union army after 2nd Manassas.

Stuart had a flair for not only audacity on the battlefield but personal flamboyance with his ostrich feathered hat and luxuriant beard.

His entertaining and the dispersed nature of his forces during the Maryland campaign did not help the Confederate forces following the discovery of Special Order No. 191.

Personally, I think that the Stretlets Stuart is too squat.

Therefore I chopped his head off and stuck it on the Italieri cavalry officer. The colour scheme is from the illustrated Don Troianis’s painting. Mr T, a terrific researcher has Stuart’s hair as a reddish brown.

My research suggests brown and indeed I came across this lock off the great man taken after his death at Yellow Tavern. 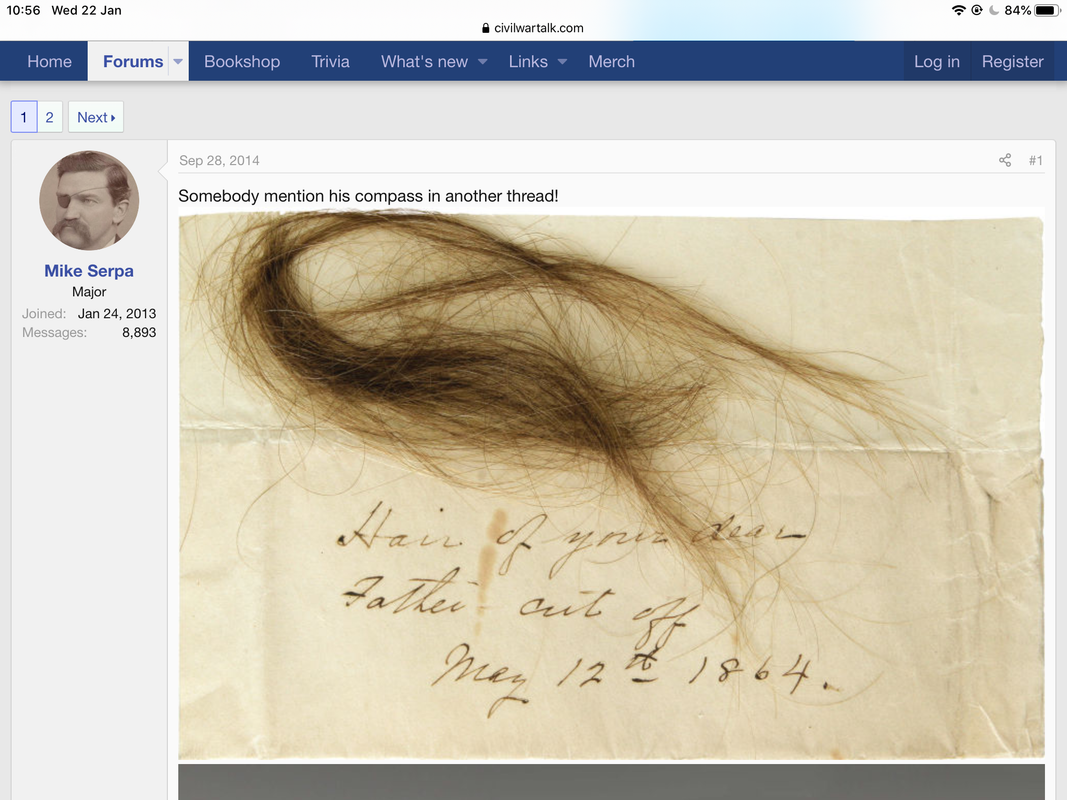 Stuart’s plume was created from static grass and then cut to size, I am pleased with the result.

The general officer is constructed from an Italieri US cavalry telescope chap sliced and matched with a a Stretlets officer holding his hat. 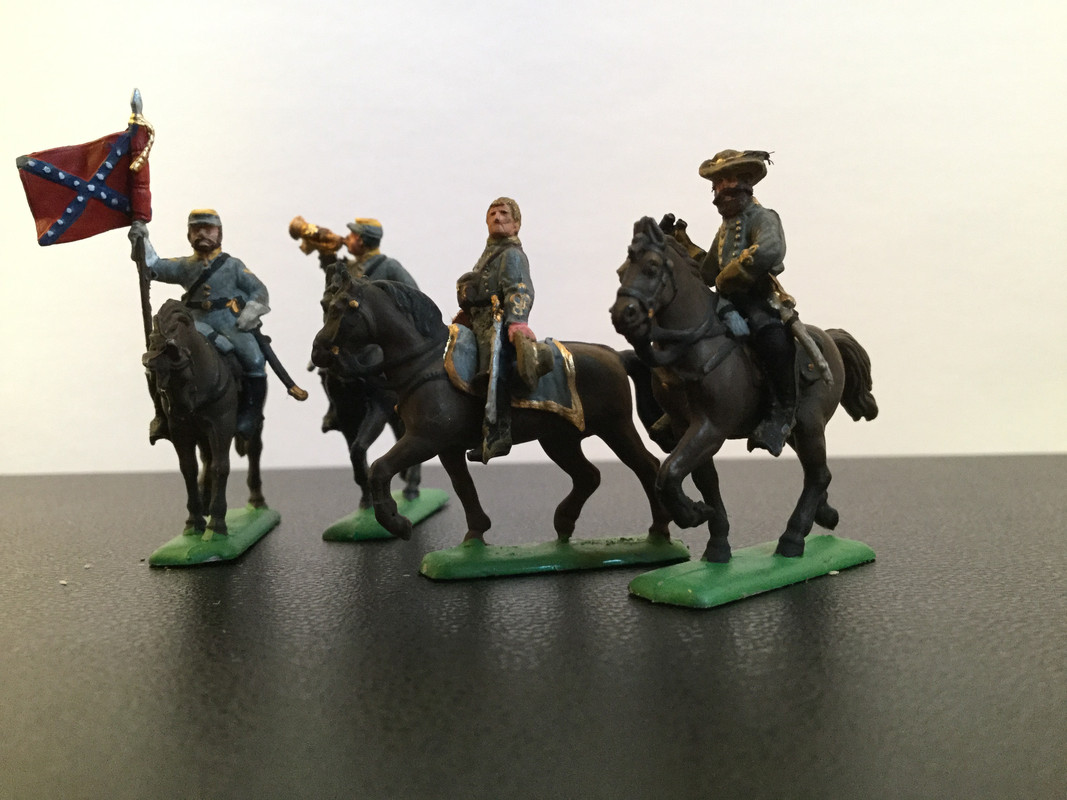 The head is from the tiny but eminently useful Newline Civil War gunners.