Thank you for your kind words Sala.

Authorised in September 1861 and initially commanded by Michael Corcoran, the unit was, following the dropping of his court martial, despatched to take part in the battle of 1st Manassass ( Bull Run).

The unit performed well although Corcoran was wounded and captured.

Command was then given to a Thomas Francis Meagher . 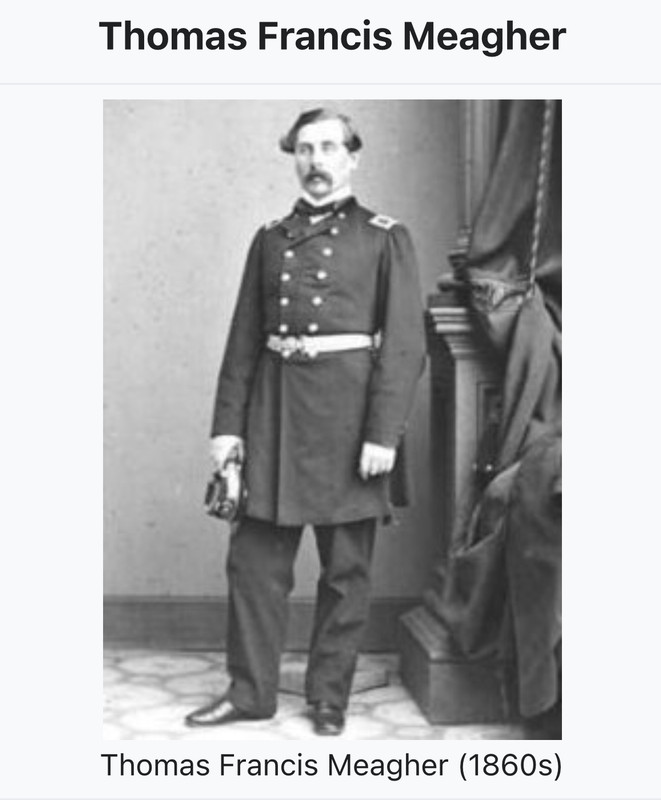 This fellow, having been initially condemned to death for his part in the Irish uprising of 1848, avoided a reduction in sentence to life imprisonment in Tasmania by escaping to San Francisco.

He actively recruited Irishmen in New York and effectively built up the Brigade and uniquely insisted that 80% of the troops be armed with the 1842 smooth bore musket in order to use the ‘buck and ball’ ammunition system as he believed in getting close to the enemy.

Success in the Seven Days campaign brought recognition of the units fighting skill which would be called upon at Antietam.

In the original action there were 540 casualties out of approximately 1200 engaged.

This was a large brigade and I have therefore used sixty troops to represent it.

I originally converted a chap, seen blessing the Orndorff mill earlier in the text to represent him.

However, my very good friend Thomas Mischak, as a surprise and to my delight ordered and painted an excellent model for me.

Interestingly, Meagher died on the 1st July 1867, falling off a steamboat into the Missouri River . A hard drinker, was it an accident, suicide, or, as claimed murder?

At my twenty to one ratio I will require roughly two thousand five hundred Union infantry to represent the Corps involved based on Carmen’s meticulous work.

As the assaults will be staggered to reflect McCleans non involvement ( probably with some form of modifier) I will be able to use some units post bashing, elsewhere, saving a lot of work.

However, their unit remains will require representing and hence the high volumes of casualties being created.

I have utilised many troops from Quatre Bras which, after a little chopping are in my opinion most satisfying.

Head swaps and chopping transform Brunswickers into combatants from both sides.

I notice that one poor chap minus his foot has stopped bleeding.

The camera is as merciless as ever.

What a lot of work that shows us again.
It's always nice to read your research.
I'm really looking forward to further progress on your fantastic project.
LG Egbert

The Union cavalry division was posted, against convention, in the Union centre and played little part in the action.

McClellan apparently toyed with the idea of charging the Confederate gun positions on cemetery ridge but was thankfully, to those concerned, dissuaded from repeating the Light Brigade’s experience eight years earlier.

Nevertheless, elements of the Division, supported by artillery and elements of Fifth Corps , Second Division, General George Sykes did cross the middle bridge and engage the enemy.

Whilst my cavalry to date are destined for escort duties I have been chopping to enhance the Stretlets and Itallieri offerings with a view to skirmishing.

I really like the Italieri cavalry. They have good faces, crisp detail and chop up well allowing the imagination to do the rest.

I have been playing with my skirmish element of the cavalry and owe a debt of gratitude to a Steve from the Eleventh Ohio Volunteer Cavalry.

He and his group are a mine of information about US. ACW cavalry and I recommend any student of the period to look into their fascinating tutorials. For example ....

I wanted to do some horse holders and Steve has shown me the correct method of doing this with the slip knot method and one rein for three horses as opposed to my original nonsense.

For the horses I used the Stretlets offerings with green stuff accoutrements as they do not hold the riders well. The Itallieri offerings are far more attractive in my opinion and seat the occupants well.

I was very pleased with Revell Panzergrenadiers chopped up to offer something a bit more dynamic along with the Airfix US WW1 chap. 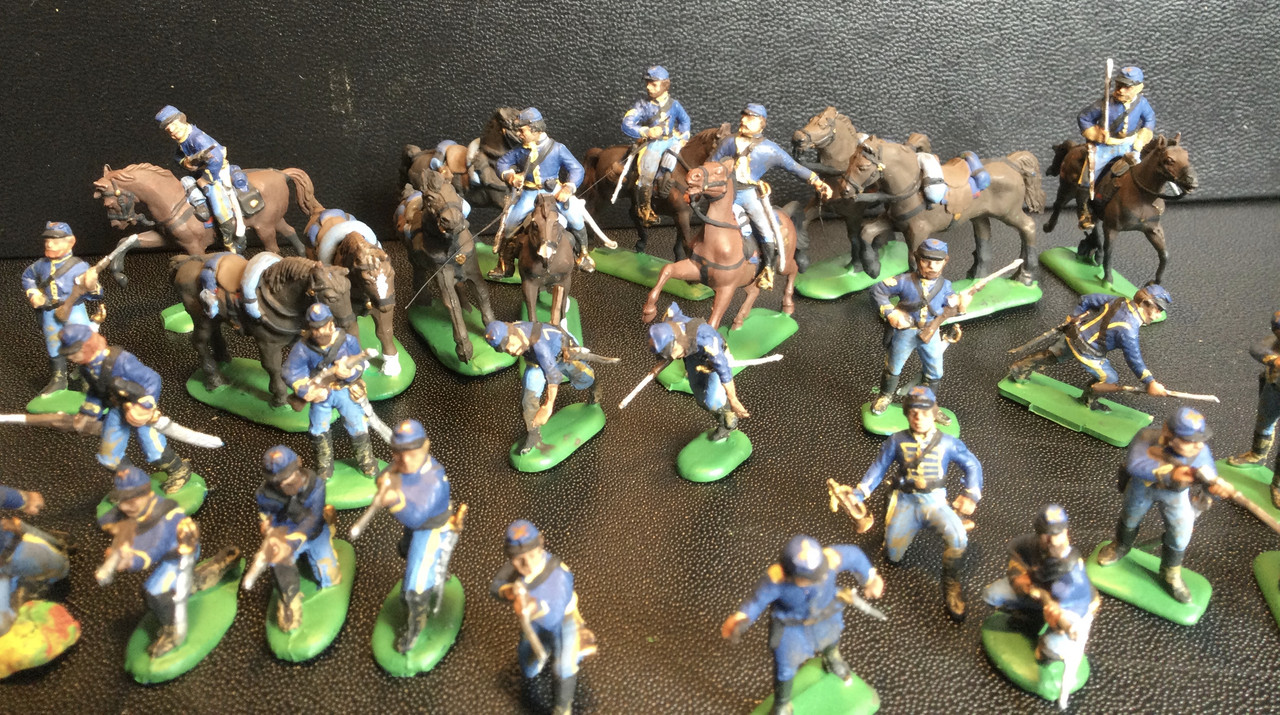 All in all, a pleasing result.

Cris, your blue bellies look really great.
I especially like the large number of converted and depicted figures.
Keep it up…much remains to be done!
LG Egbert

I have now completed my mounted US cavalry unit and am pleased with the ‘mix’ of Stretlets , SHQ and Itallieri troops.

Upon reflection I might do a few more and a further officer would make sense.

The Stretlets swords are a bit chunky but the figures are wonderfully detailed down to the rifle clips on the rifle bearing guys.

The Union standard bearer reminds me of the old Britain’s guy I had as a kid, a long time ago.

The flag is smaller than an infantry flag but still looks enormous compared to the guidon.

I have now completed Hooker’s, Mansfield’s and Jackson’s Corps .

Summer’s massive Corps is nearing completion and Longstreet is well under way.

All in all, the destination is coming into view.