I have had thoughts about re-fighting this most bloody of the American civil wars battles for sometime.

My research of late has been towards Aspern Essling, a battle, again featuring watercourses, but whilst the troops lie unpainted, but ready, I felt a break from Napoleonics might recharge the batteries.

However, before commencing this project and to the Feldmarchall's horror, as I am still producing figures for Quatre Bras, I wanted to explore the feasibility of making realistic maize fields.

To the Americans of course Maize is called corn and although the battlefield had lots of cornfields none is as famous as D,R. Millers 24 acre cornfield.

I have seen lots of ideas on how to represent this crop with varying degrees of success. 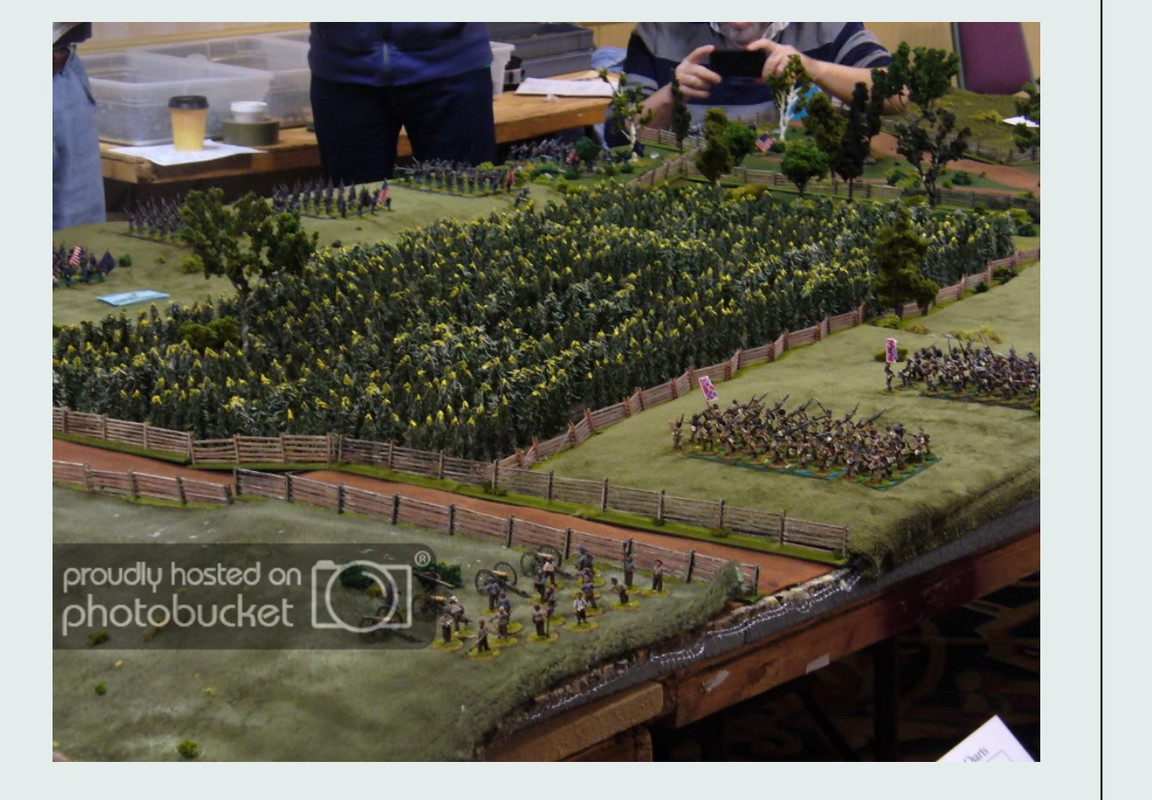 There is a lot of information about cornfields of the real variety but I found an excellent source of information regarding our Civil War type and its planting. 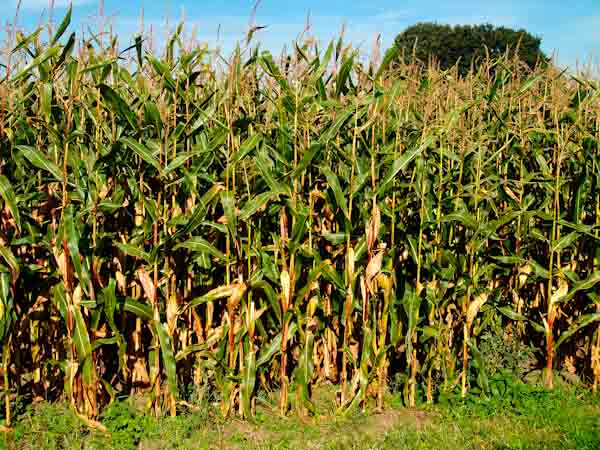 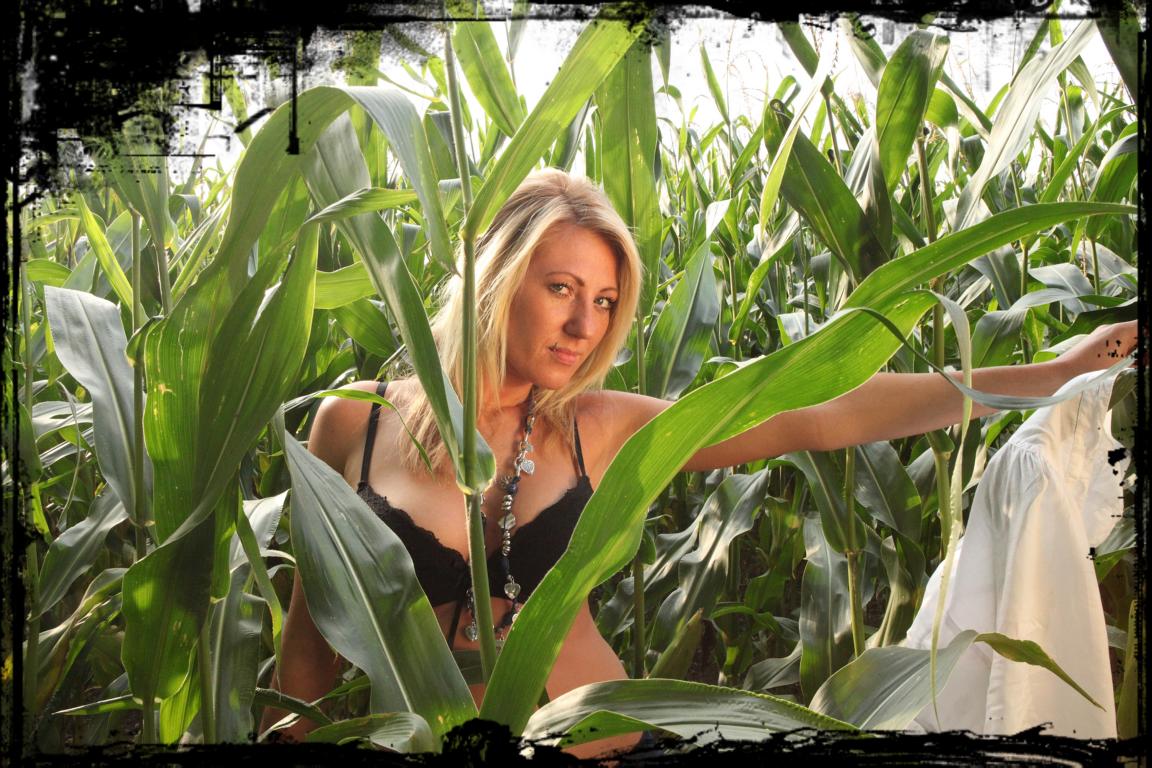 [Courtesy of my very good friend and head of my German research group, Thomas Mischak.]

Many historical accounts speak of impenetrable stands of corn.

If, however, you are a farmer, then harvesting your crop is pretty important when planting the seed. Lanes between the stalks make access for weeding and harvesting which makes sense.

Difficult going for troop formations but not the jungle environment some speak of.

This illustrates the reality to my mind. 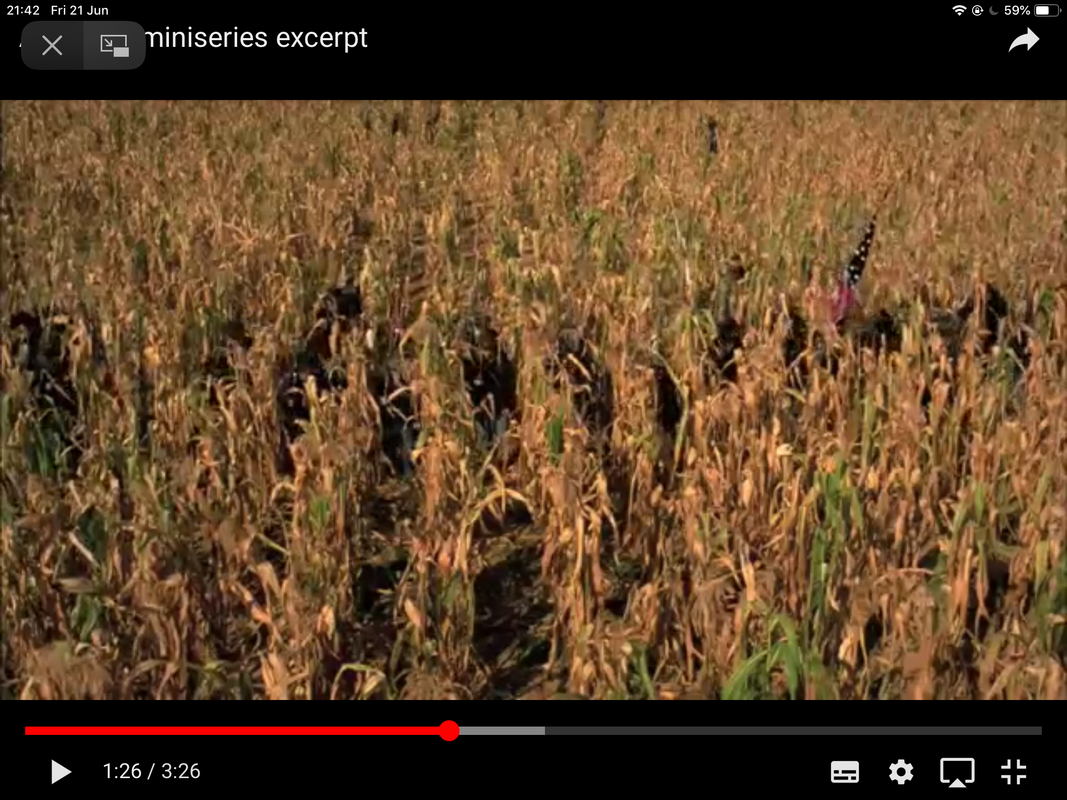 I looked at the railway modelling world for ideas and here we have anything from Christmas decorations [ practical for war games] to the plastic Busch product. 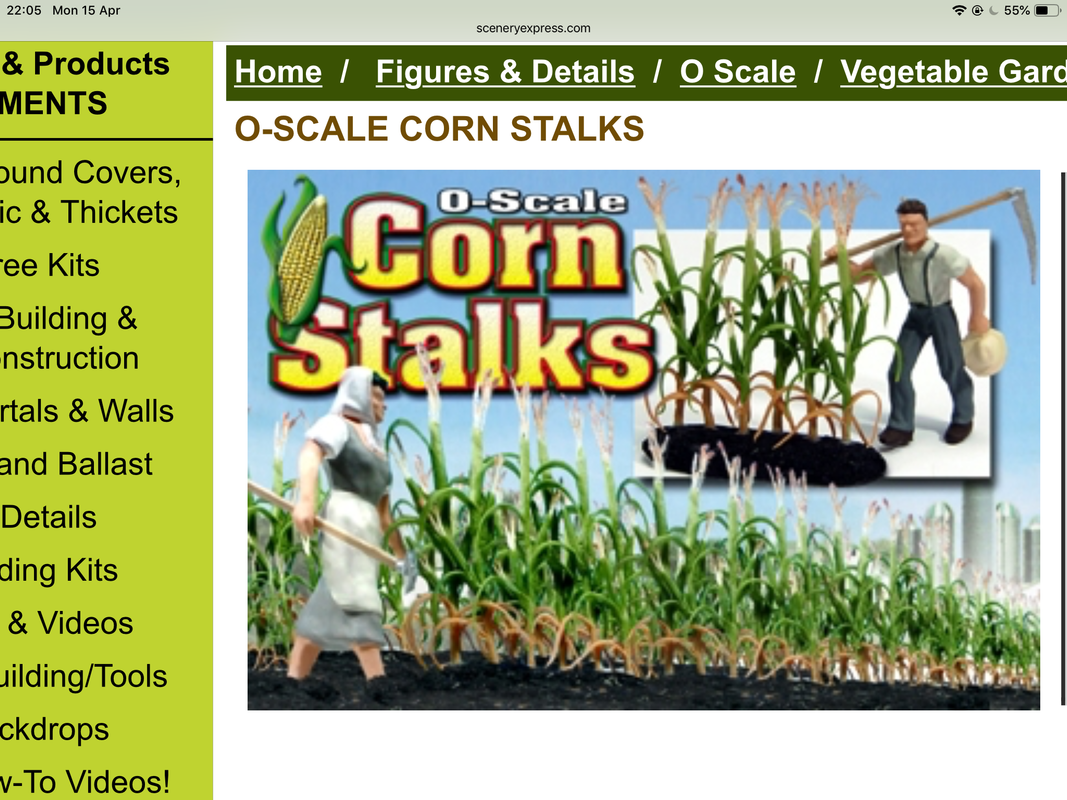 Personally,I prefer to use natural products as these absorb light rather than reflect it.

I started off with Rosemary leaves and fir tree leaves all to no avail. 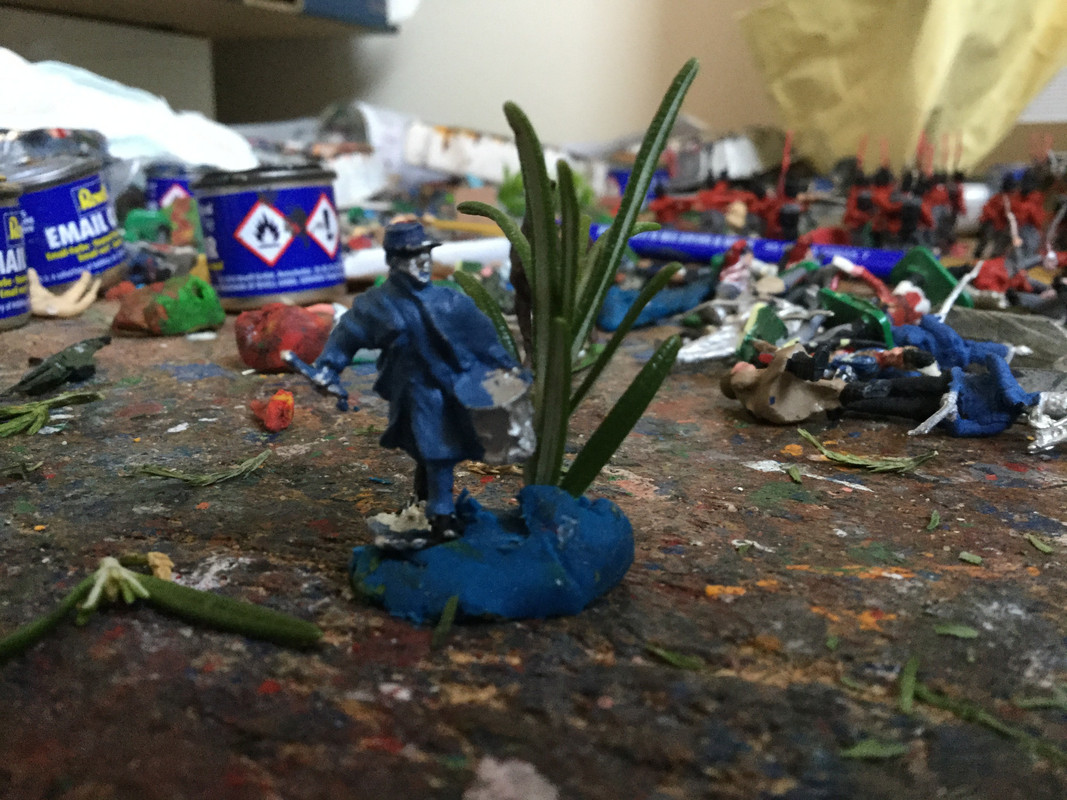 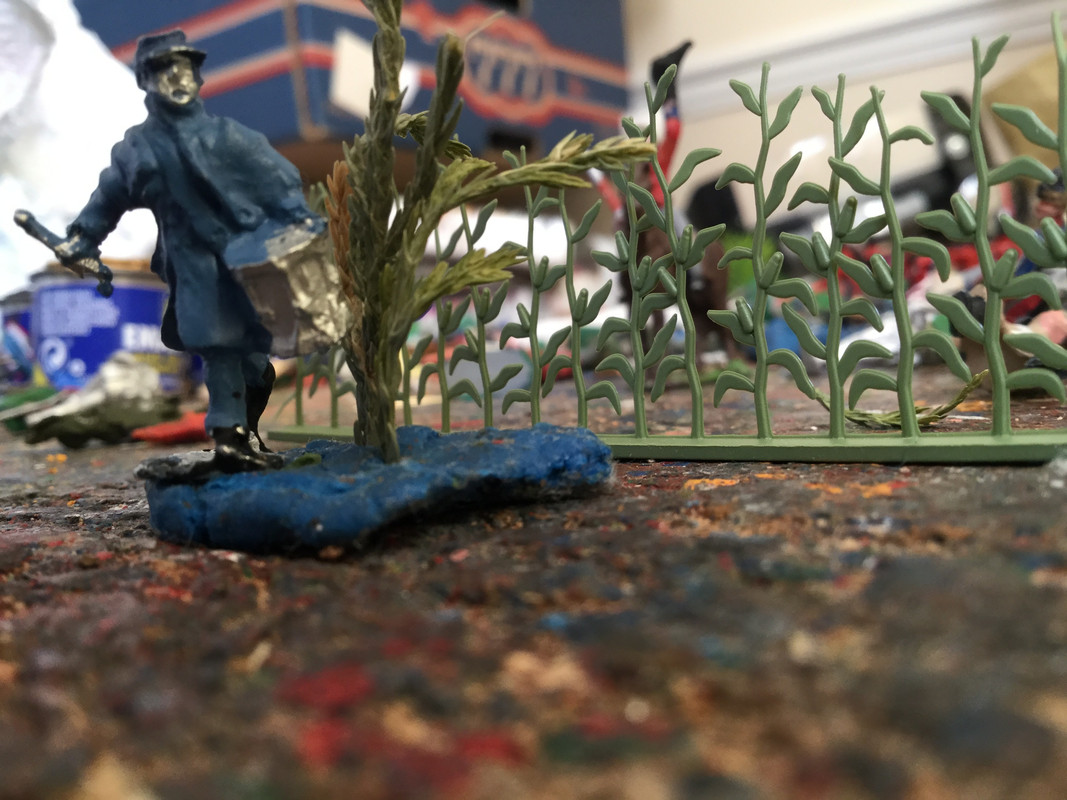 However, whilst trimming the front garden I spotted 'love in a mist' [ Nigella Damascus] growing.

This is a lot better and the young growth is in scale. 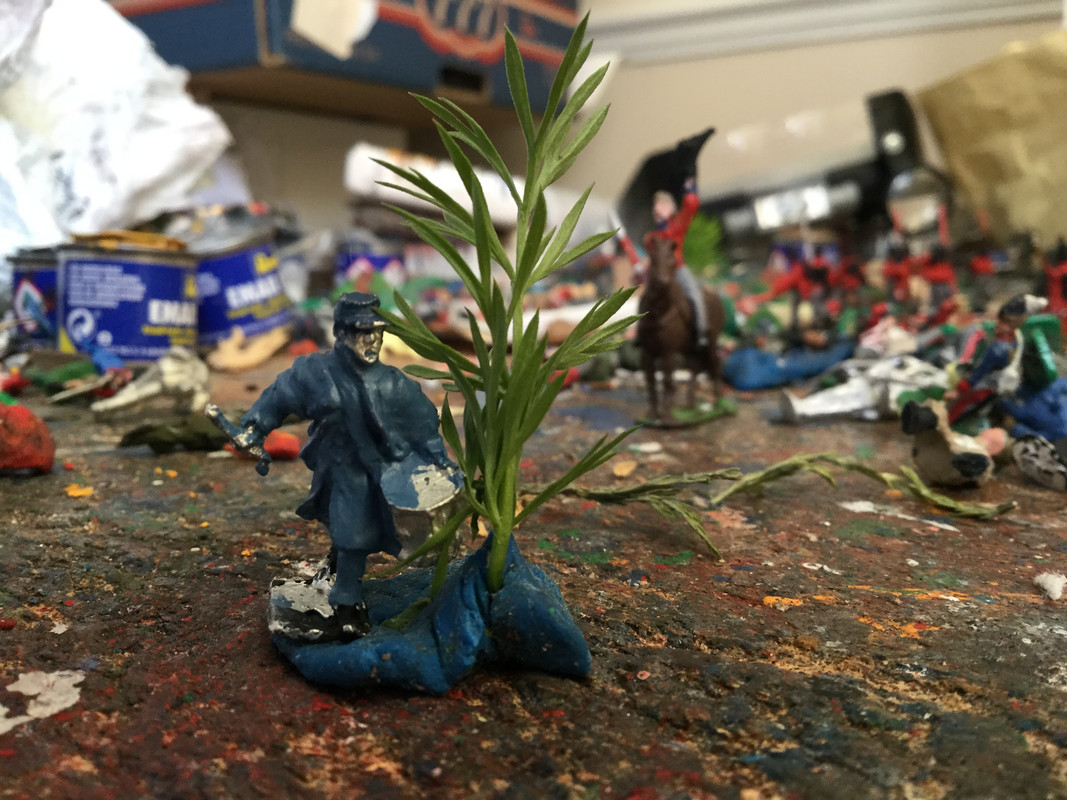 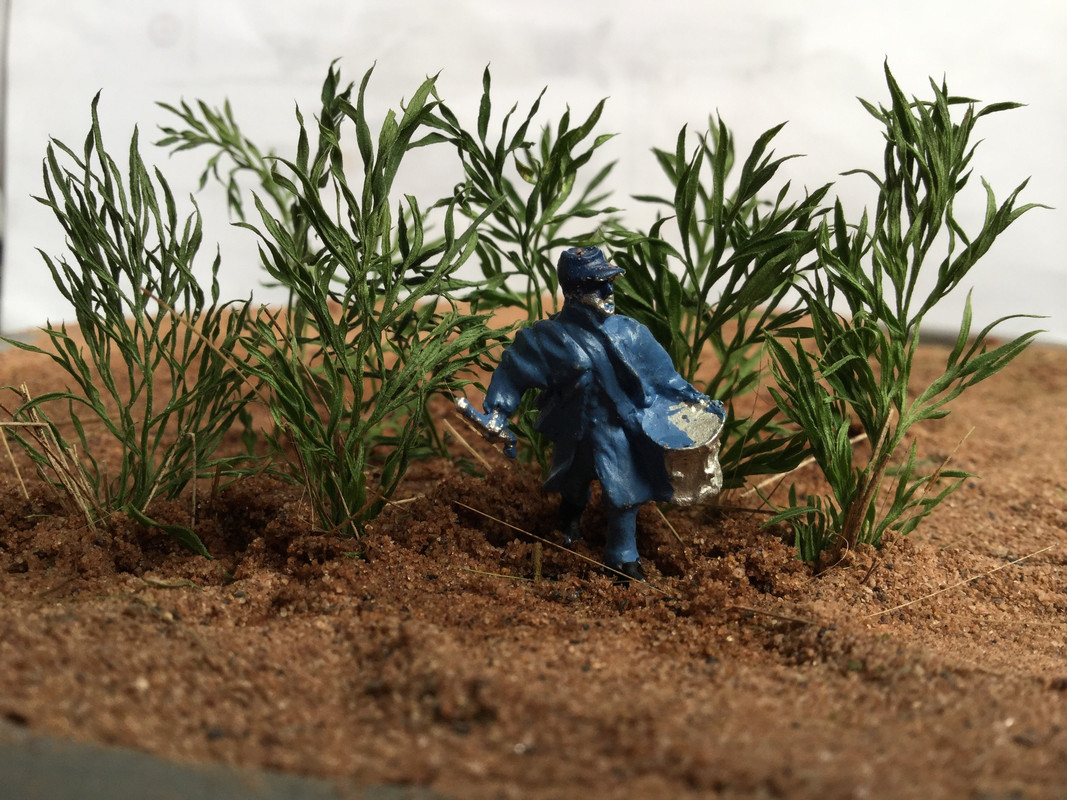 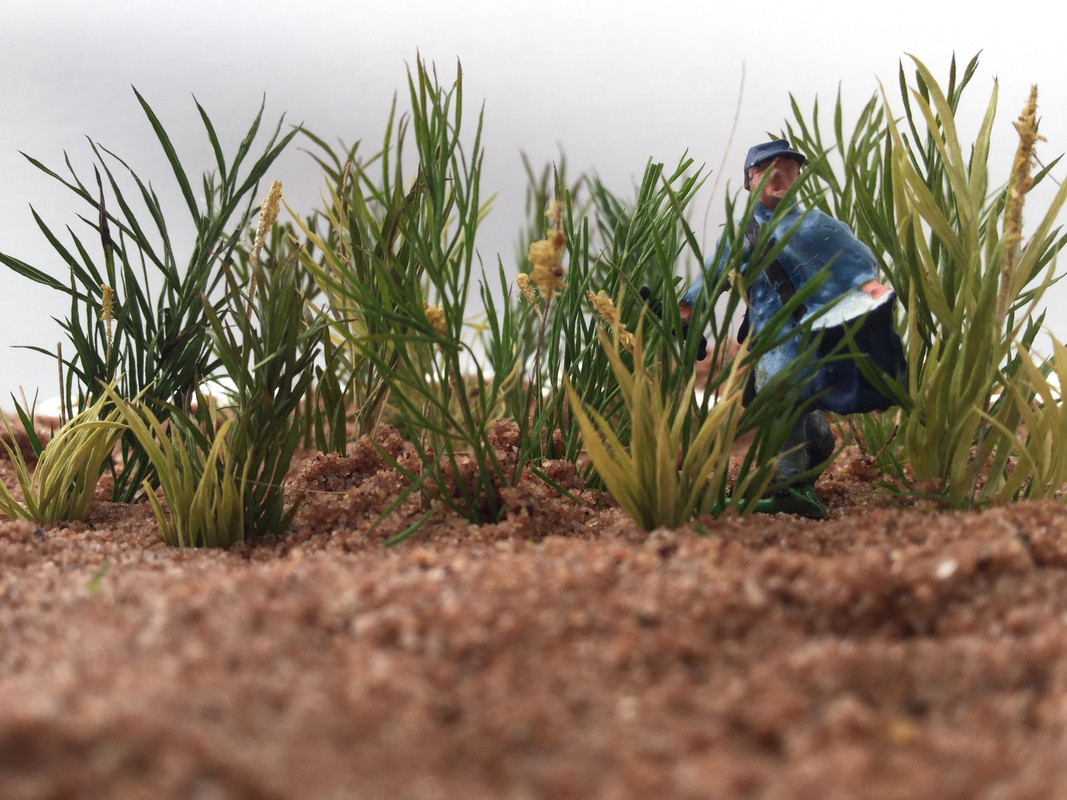 However, the Feldmarschall, a keen gardener, said they were rubbish!

Back to the drawing board.

Well, back to the internet at least.

It is amazing that the simplest things can make a difference. Just by typing HO OO a magic wand appeared to be waved and I realised I had been wasting my time.

TASMA 00680, made in Vietnam are fantastic and at £10.00 approximately for thirty two replica plants are a bargain. 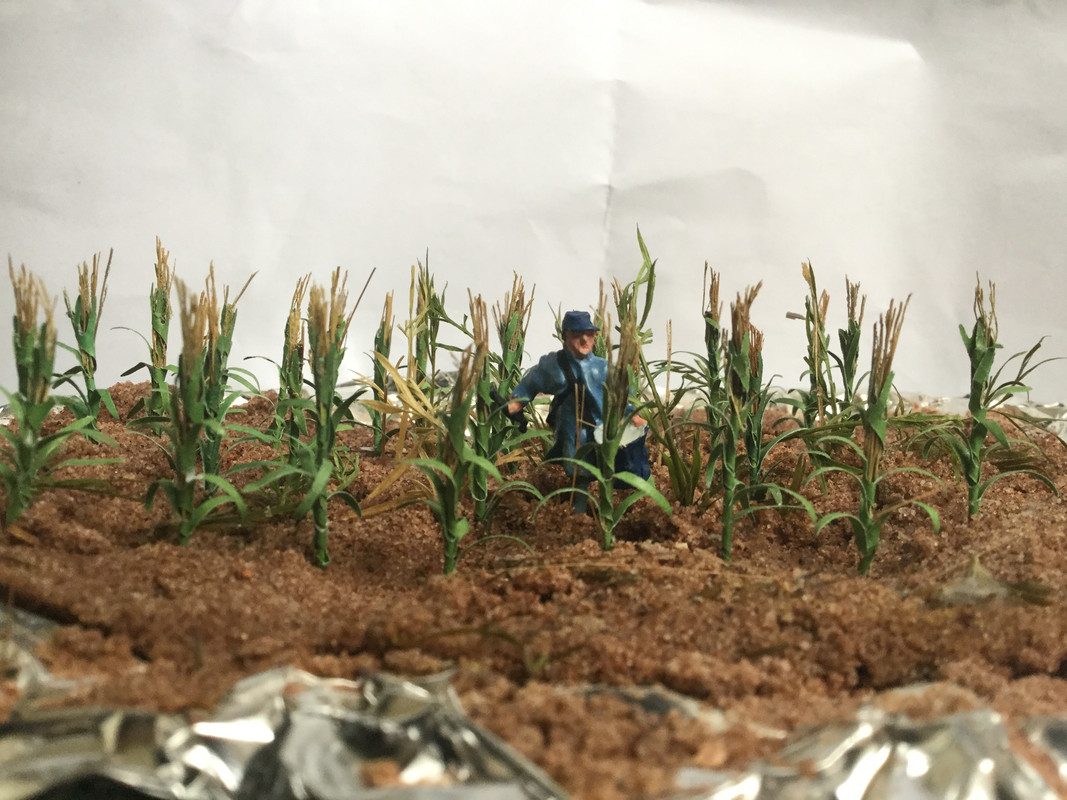 I think that my Nigella, as dead foliage in September, will still be useful but I have now got solution in order to represent these hallowed fields with the degree of realism that they deserve.

At the outset of the Maryland campaign General Lee was injured whilst trying to restrain, Traveller, his horse who had been startled by a map flapping in the wind.

Falling on his hands he suffered ‘ a serious ligamentous strain’ in both his hands with a suspected fractured right arm.

As a result he was in a sling and was forced initially to use an ambulance until the engagement. 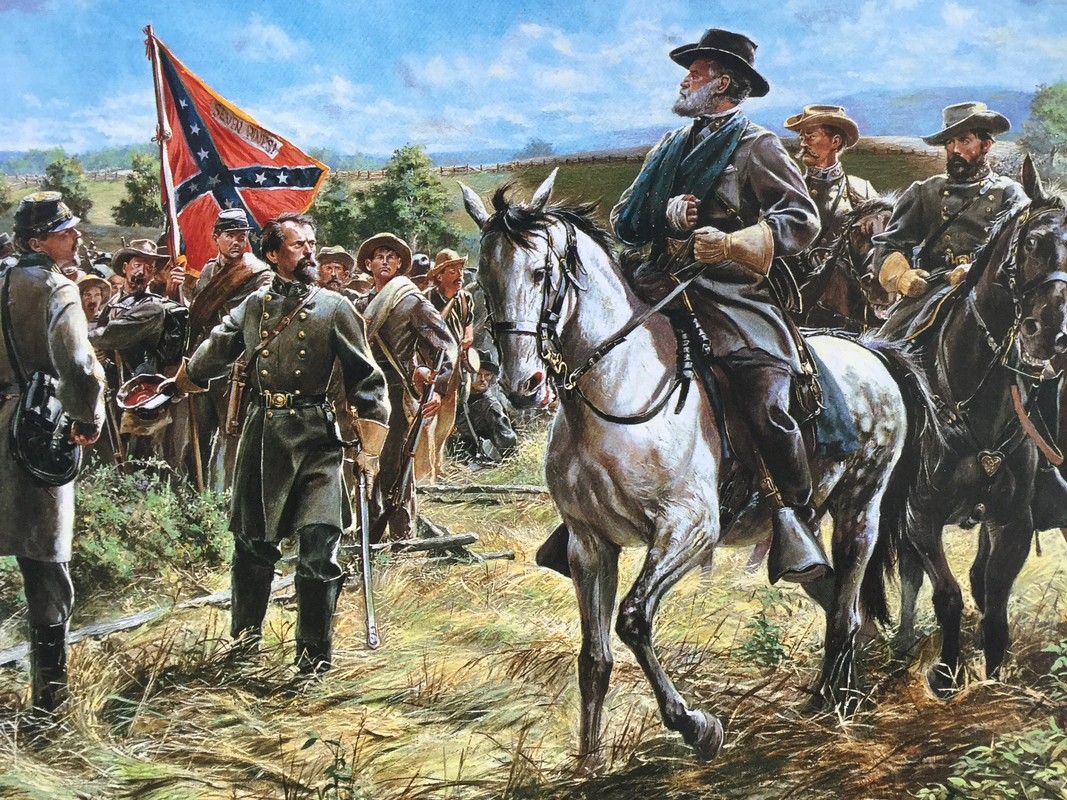 Most figures of ‘ Marse Robert’ are therefore not applicable to this action and I determined to make something a bit more relevant.

The Stretlets Lee was chopped up and a wounded American Revell using a musket as a splint was utilised for the injured, slung arm.

I then fashioned a sling from tissue paper and glued this into position. 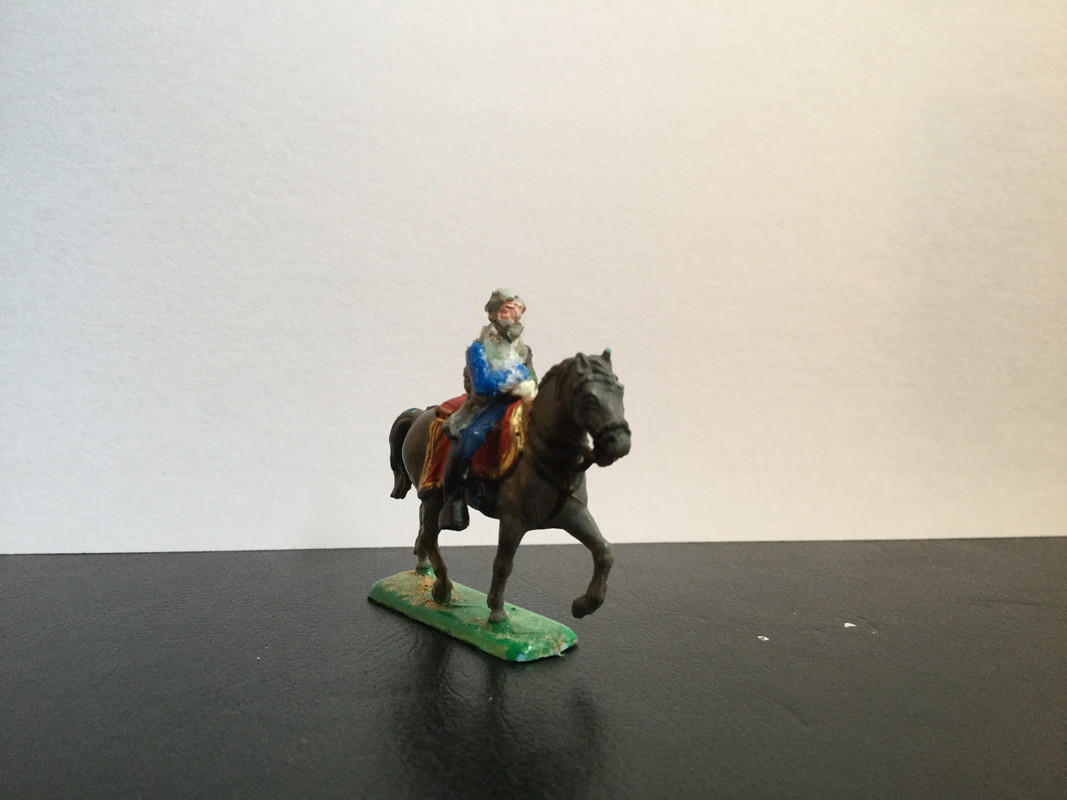 Upon commencing painting I decided that Robert did not look much like Robert and a convincing general is vital to my plans.

I investigated the Stretlets, Confederate Infantry Standing troops, a magnificent leap in modelling standards with lots of realistic poses and faces.

The officer is a spitting image of Lee and having swoppped the heads I am very happy with the result. 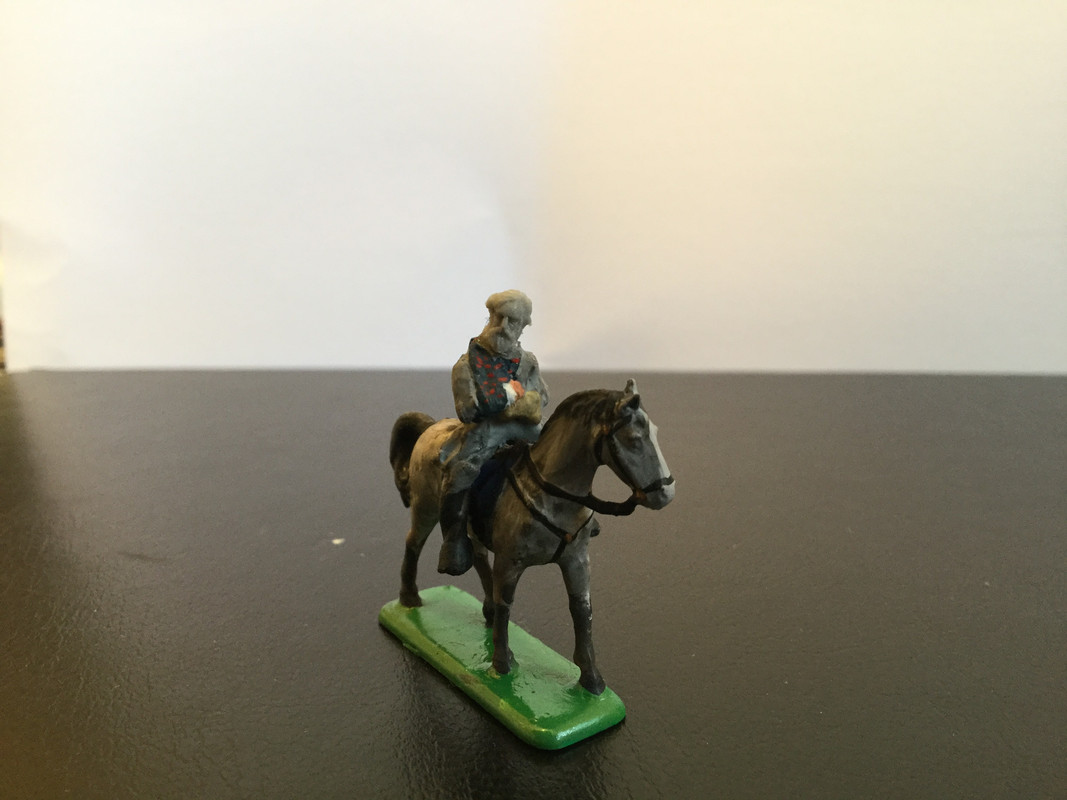 PSR also makes this point along with Longstreet and Picket look alikes.

The horse is from the Italieri Civil War Artillery set painted to represent the presumably forgiven Traveller. 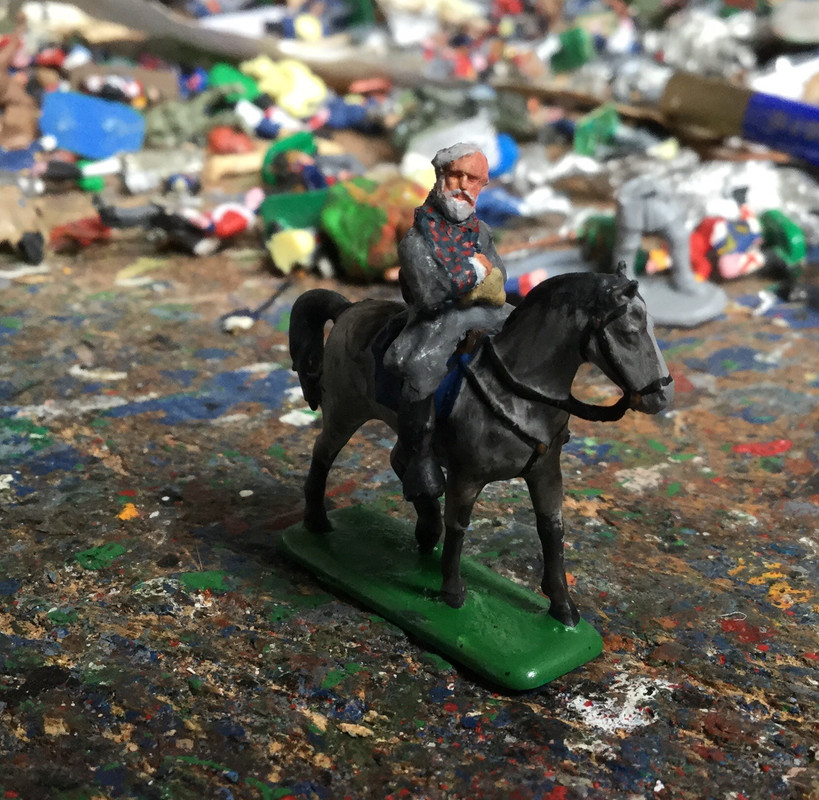 Nice report about the corn. You found a very good option.
Remember: if the Vietnamese can make it, Chris Dodson can make it himself too.

And that lady in the corn? Is that Thomas Mischaks wife?

Hello Mr C and thank you for your kind comments.

The lovely Martina, Thomas’s wife was unavailable for the maize photo shoot!

The commander of the right wing of Lees army was ‘Pete’ Longstreet, his ‘Old warhorse’.

The Stretlets version of him was in my opinion wrong so I pinched the Stretlets standing infantry officer who looked a lot like Longstreet and attached him after some sawing to a pair of legs.

A better sword from the bits box and a sweeping broom straw for a cigar and hey presto! 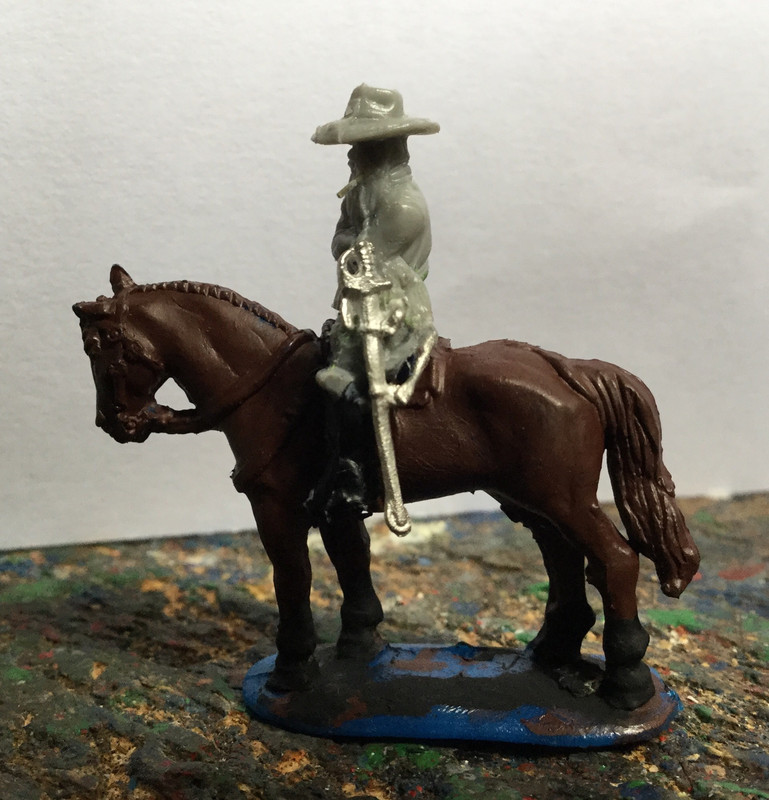 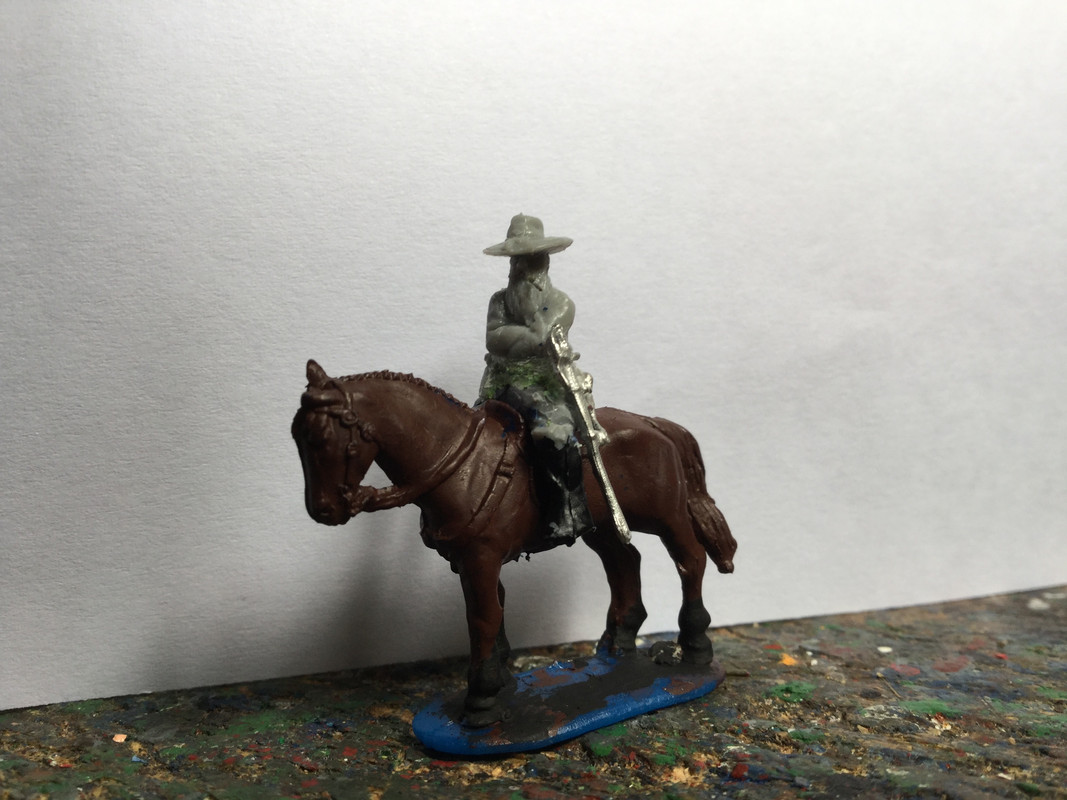 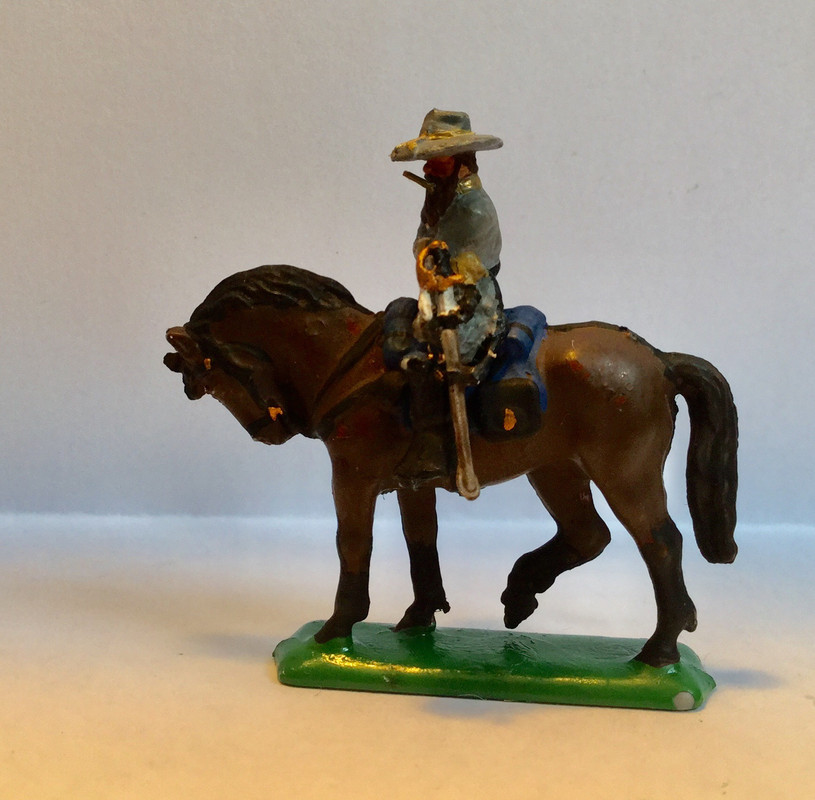 I was really quite pleased with him with just a little tidying up required after seeing how he photographed.

A little more research and it appears that due to an infected heel Mr L wore carpet slippers at this most bloody of American battles!

A very nice article called the Antietam Journal states that Longstreet wore one slipper on his left foot. Whilst holding his officers horses who were serving guns he is stated to be sitting side saddle.

I fancy that galloping around side saddle would not be too practical and this was a temporary expedient. You need your feet in the stirrups to control your horse so it’s time to saw his left foot off.

Again, back to the drawing board.

I thought that Quatre Bras was a mass of contradictory information but the bizarre seems to be alive and present at Antietam.

Another interesting fact was that generals John Bell Hood and A.P. Hill had fallen out with General Thomas Jackson and prior to Antietam had been travelling at the rear of their columns under arrest! A command nightmare.

Even Jackson got in on the injury circus having a few days previously had his horse fall on him, bruising him badly.

Further to my discovery of the various health issues affecting the command elements Confederate Army of Virginia I have removed Mr Longstreet’s leg and given him a new one from a Yankee cavalryman.

I had to make out of greenstuff a new stirrup and whilst a pink fluffy slipper would show the good generals sense of humour I thought brown would be more appropriate. 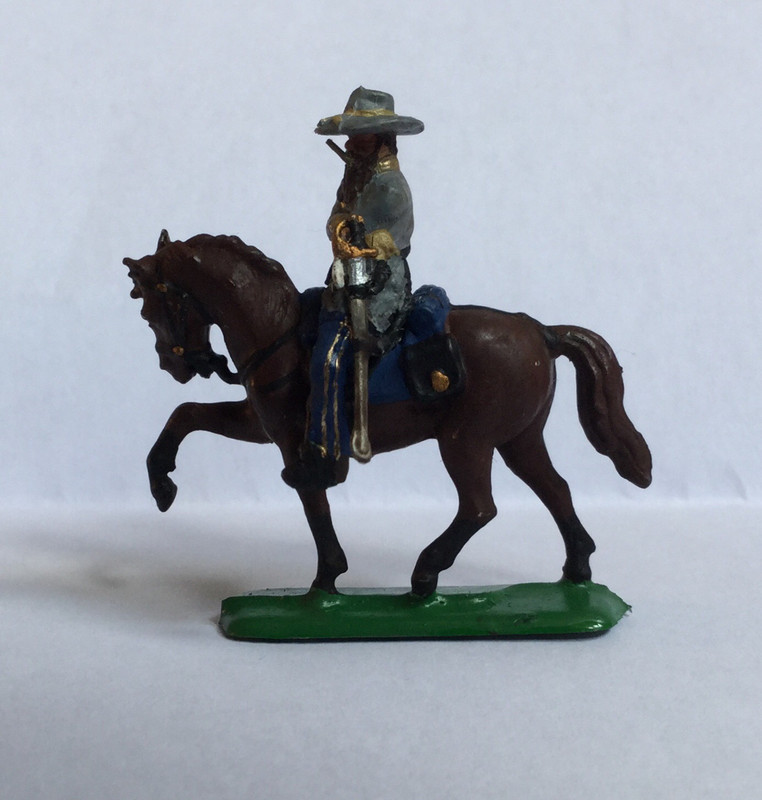 I am quite pleased with him but it is disturbing how photographs show off your painting errors despite the amazing techno visor!

‘Stonewall’ Jackson a deeply religious and taciturn man with little time for military pomp preferred to dress plainly with his battered cadet cap from the Virginia military Institute where he worked as a professor.

Having recovered from the bashing given by his horse, ‘ Little Sorrel’ a few days previously Mr Jackson has escaped from the CSA command infirmity pool in time for battle.

Presumably he forgave Little Sorrel, but the horses opinion is unrecorded as far as I am aware. 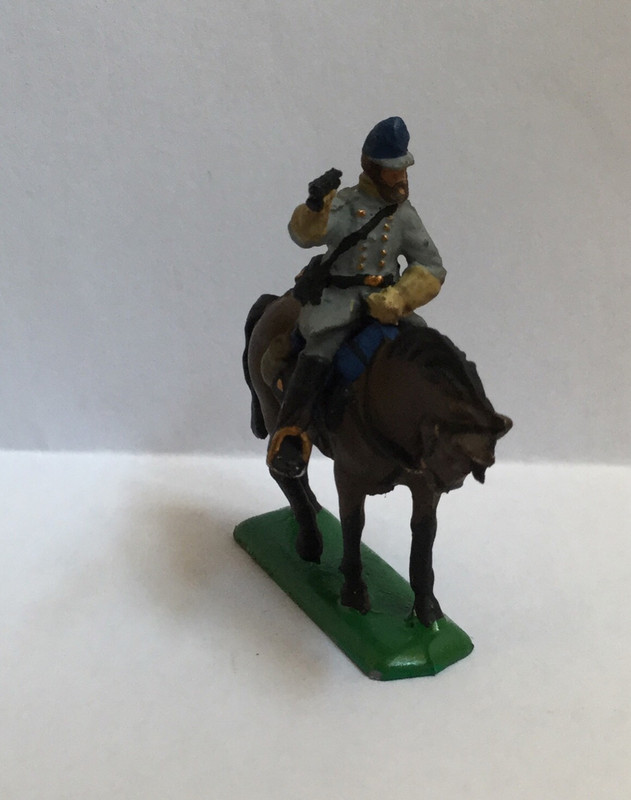 The figure is from Hagen Minitures but I have used an Italieri horse as I felt the original was too big.

I have been burrowing in the United States National Archives, a truly fascinating and rewarding resource.

Highly recommended if you are a student of the period.

Incidentally I found this remarkable site.

Jackson’s horse was 15 hands whilst Lees was 16. I was under the mistaken impression that a Traveller was a fairly small horse for some reason.

Both horses survived the war before being exhibited after their deaths.

Traveller lies outside the Lee chapel near the entrance to the Lee family crypt having been laid to rest in1971, one hundred years after the horse’s death.

Little Sorrel was stuffed and is an exhibit in the VMI with the cremated remains being interred under the parade ground but Jackson’s statue.

These are remarkable conversions: I especially love the Lee you concocted from other, later, Strelets production: the original CW HQ staff boxes (both US and confederate) are like ones for the Napoleonic period, and unfortunately the sculpting/engraving is of a lesser quality.
So you really improved the look.
I like Longstreet as well: the cigar is a nice touch.

One feels your passion for research: thanks for sharing all this info.

‘ Little Mac’ a former West Pointer and President of the Ohio and Mississippi Railroad was called by Lincoln to re organise the Union forces following the Union defeat at Bull Run ( First Manassass).

An extremely capable administrator he forged the Union forces into the entity that would eventually win the war. His soldiers held him in high esteem.

However, after having been given command of the Army of the Potomac and following the Peninsular campaign his caution drew the suspicion of Lincoln who replaced him.

The next Union disaster at second Manassass saw our friend re instated, much to the delight of his troops.

I found a nice picture of our general upon his horse Daniel Webster ( also known as Handsome Dan and that Devil Dan) and I have tried to replicate it. 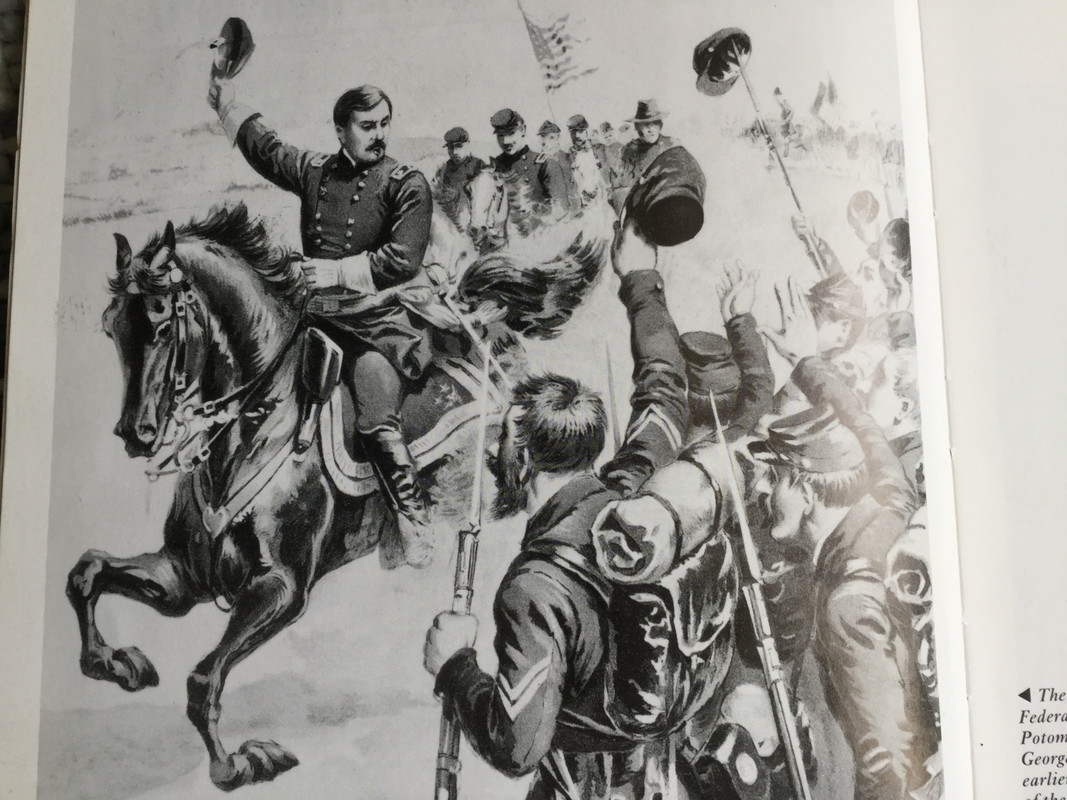 Dan was a very fast horse always outpacing the Union staff accompanying the General which would add nothing to command and communication efficiency.

The horse is from the Zveda Napoleonic command set.

Our hero comprises of a Stretlets Union general figure suitably chopped.
I used a kepi from an Italieri Union chap and melted the head hole out with pillars and a soldering iron. The sword handle was replaced by a new one from the bits box.

The head was from the Zvevda ADC on foot. 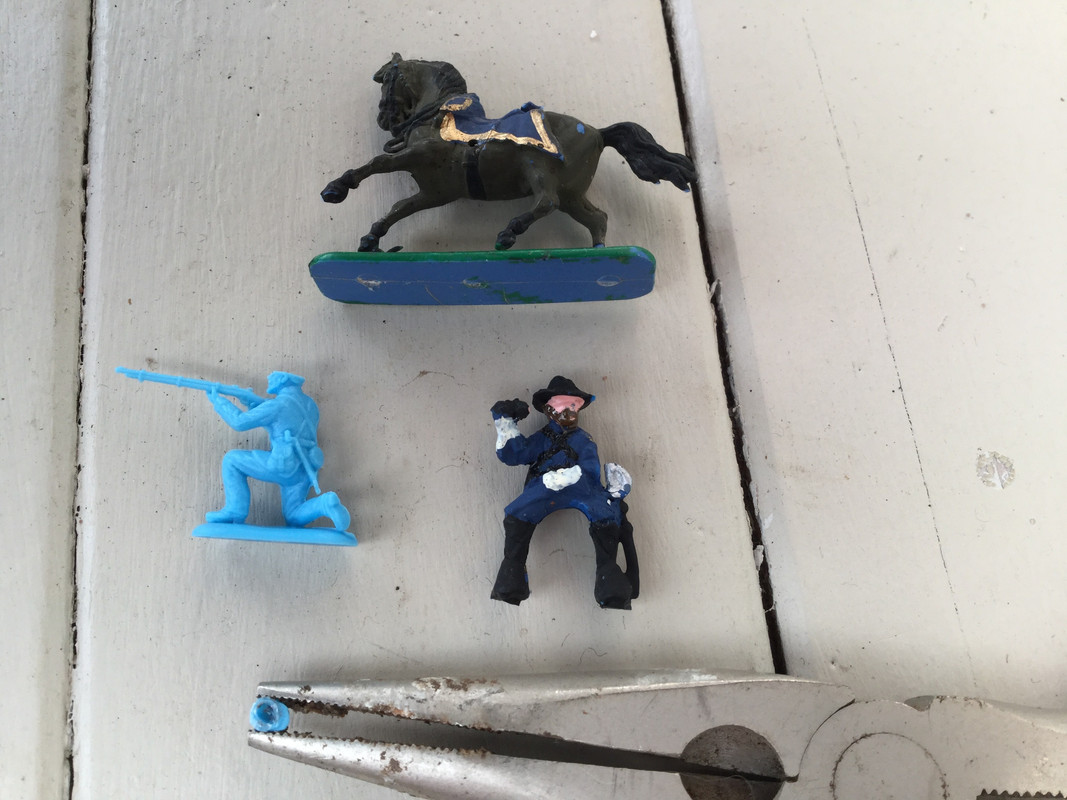 My original description was of a black animal from the Osprey Campaign series.

This horse thing is interesting as Daniel was recorded as 15/16 hands high and a dark mahogany with three white feet and a star on his head according to the Baltimore South newspaper on the 25 th October 1861.

Unfortunately, there is no mention of which legs were marked. I have done the two rear ones.

Left or right I asked the Feldmarschall?

Right, so front right it is unless someone has a definitive source. 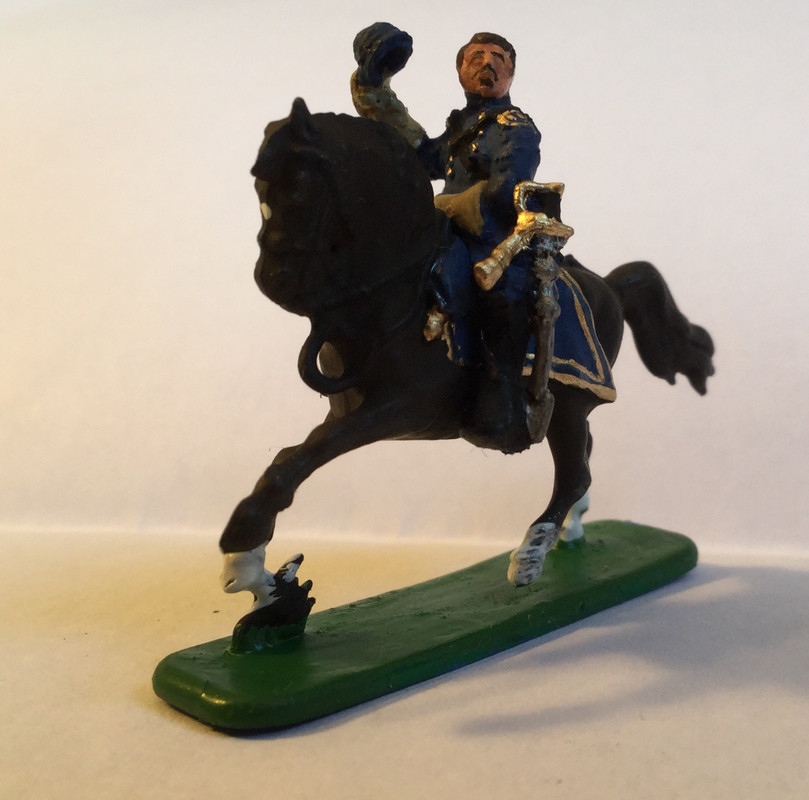 The black horse is probably a reference to a gift from a fellow officer of a creature called Burns.

Apparently this animal always bolted for his oats at dinner time and McClellan dared not use him at that time because of this habit!