I have now finished the Otto house and am pleased with the overall result.

I have learned a lot building these houses and hopefully my skill set is improving.

The camera has shown a few tidying up areas as always.

Whilst not perfect I feel John would have still recognised his property on the way home after a few glasses of Applejack. 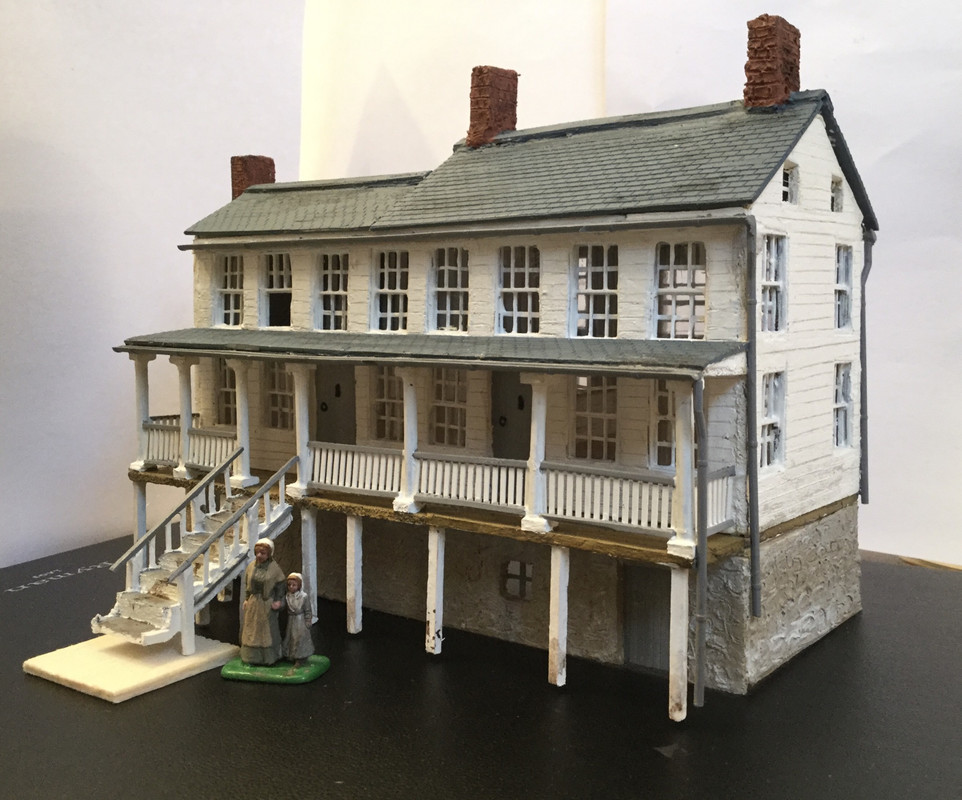 The girls are back again. 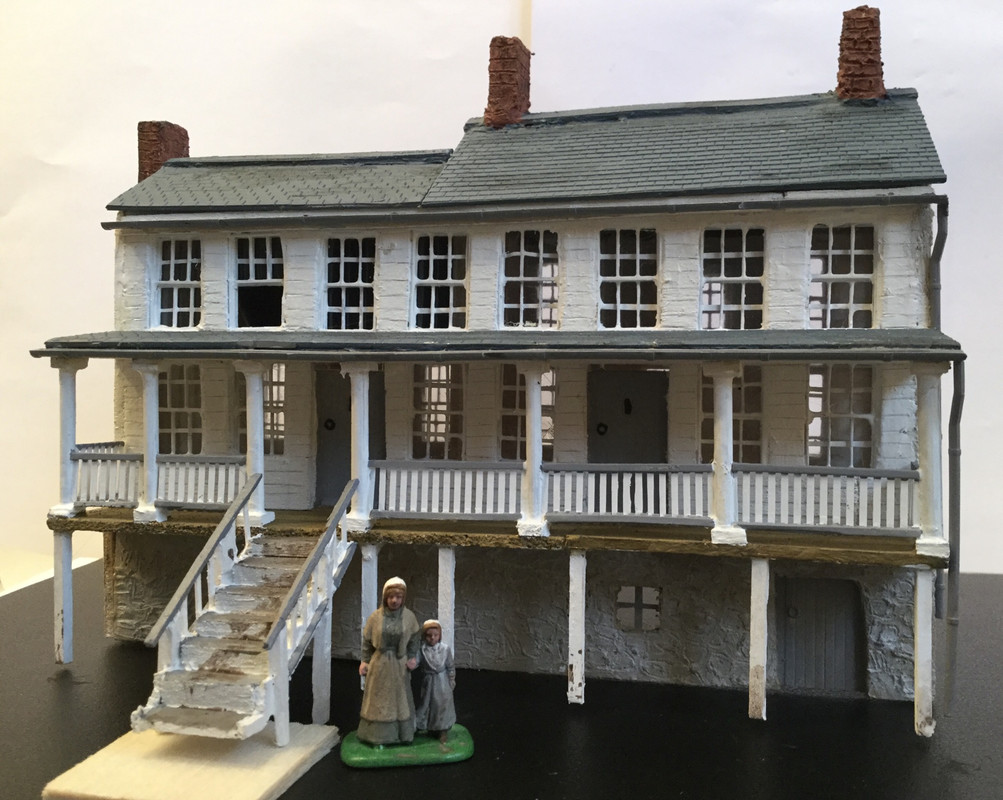 Next up the Joshua Newcomer house I think.

I am looking for something a little different to represent some of Mr Stuart’s command on the left wing.

A little chopping, head swaps etc has resulted in something more to my liking.

The horse holder is a Newline bare headed artilleryman chopped in half, stave removed and remounted on an Italeri Confederate cavalryman.

My general with the hat is a Stretlets running Union guy suitably chopped on a Highland Waterloo 1815 horse. 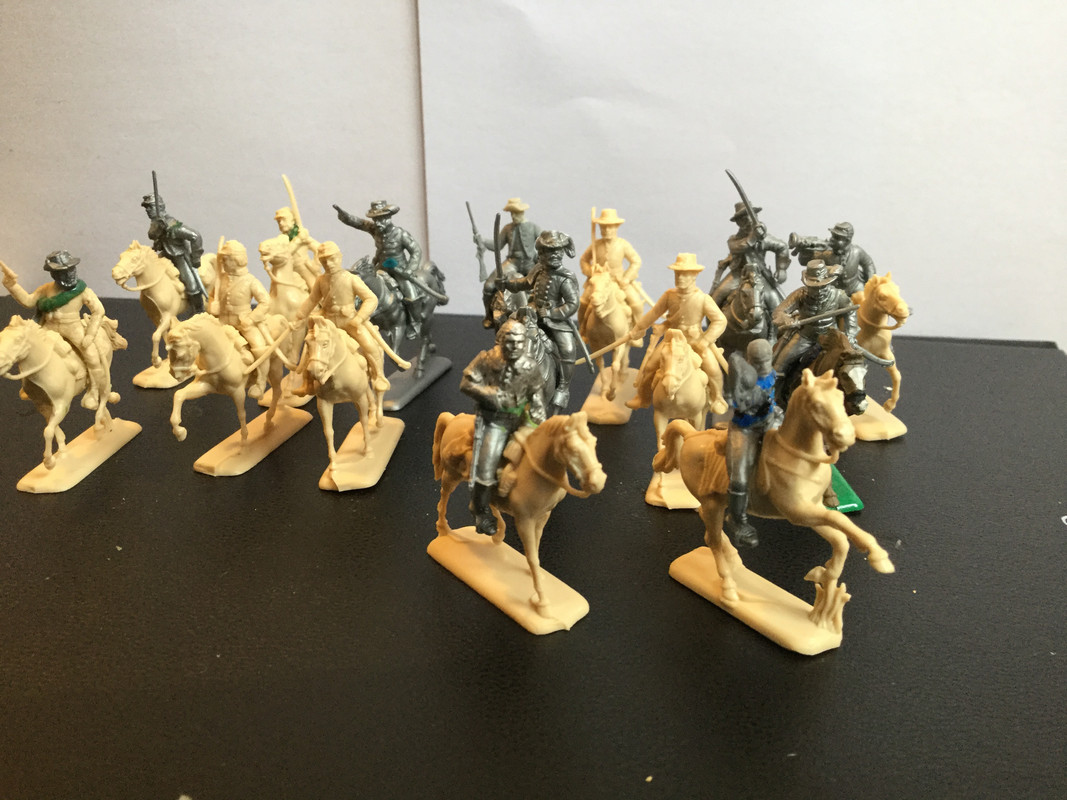 I have commenced painting up the troops required and whilst not up to some of the phenomenal standards of the forum, I am quite pleased with the ‘look’. 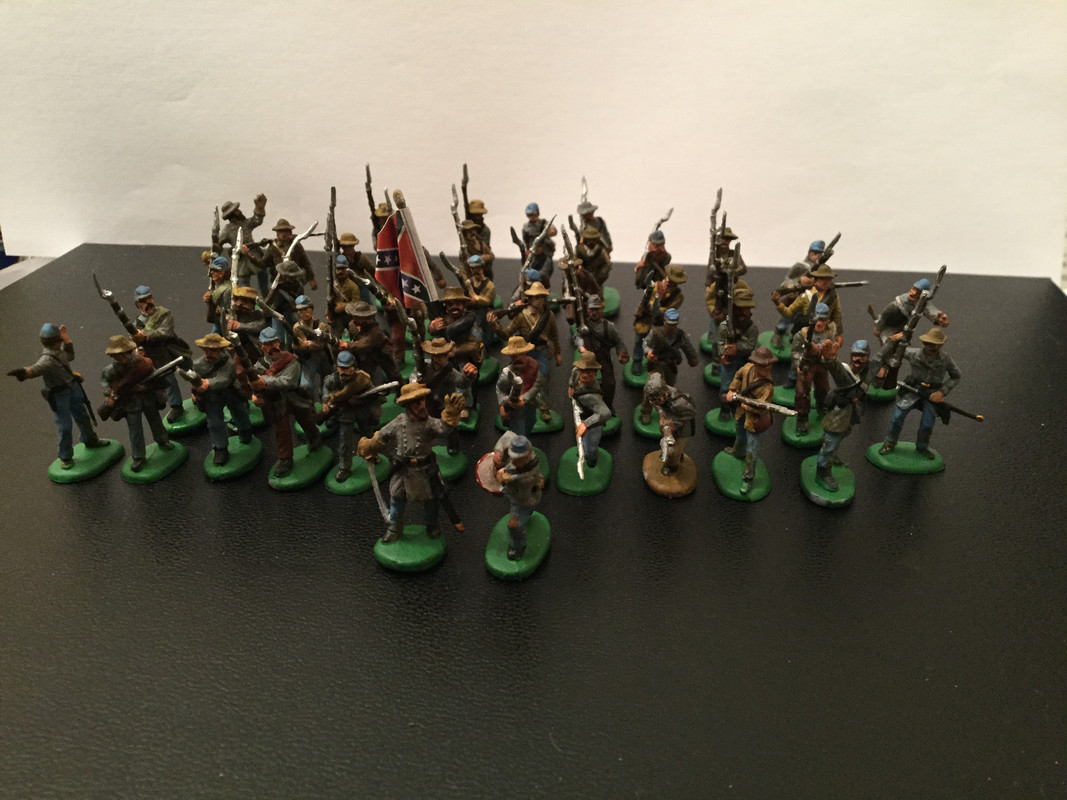 I am using brigade units of approximately fifty troops per unit. Whilst not exactly correct as some units were smaller or larger than others I feel from past experience they work well.

The organisation and troop figures are taken from the excellent Maryland Campaign part 2, Antietam by Ezra A Carman.

Colonel Carman actually fought at Antietam and in 1864 was hired as a historical expert to investigate the campaign.

Based on his exhaustive research, edited by Thomas Clemens and based on a one to twenty representation I will need 1500 Confederate infantry and 2400 Union troops.

On top will be the artillery and associated cavalry, staff etc.

These figures represent the troops present that took an active part in the action following the actions at South Mountain etc.

One of the benefits of Civil War troops is that apart from a few select units, The Iron Brigade for example, the uniforms are simple and homogenous.

This allows troops to be painted up as firing lines, marching etc and mixed as appropriate for the situation they find themselves in.

Thank you for your kind comments Patrick. I have found this project to be most interesting and at times totally bizarre!

I have painted up my conversions and am quite pleased with them.

There is a little tidying up required for my horse holder it seems, the camera is merciless! 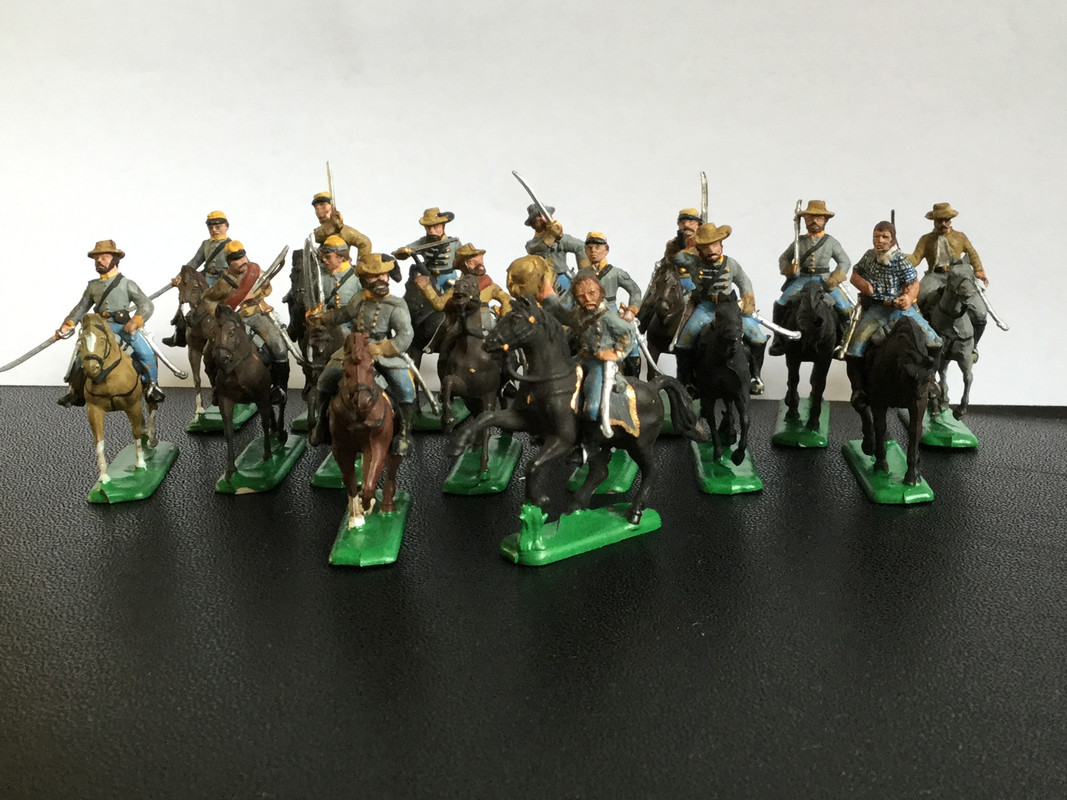 Incidentally, I found this wonderful link regarding cavalry actions and the inherent problems for commanders which is applicable to all eras I would suggest.

My very good friend Thomas Mischak sent me along with some other goodies the Imex ambulance set as a birthday present recently.

The set is basic but effective and depicts a Rucker ambulance.

This ambulance was very popular from the mid war replacing a host of inferior designs but, unfortunately was not around for Antietam.

I did some research and found this fascinating article.

From this it seemed a Rosecrans, named after the general, would be satisfactory, so out came the knife.

I found this wonderful replica, also called a Wheeling to base my design on. 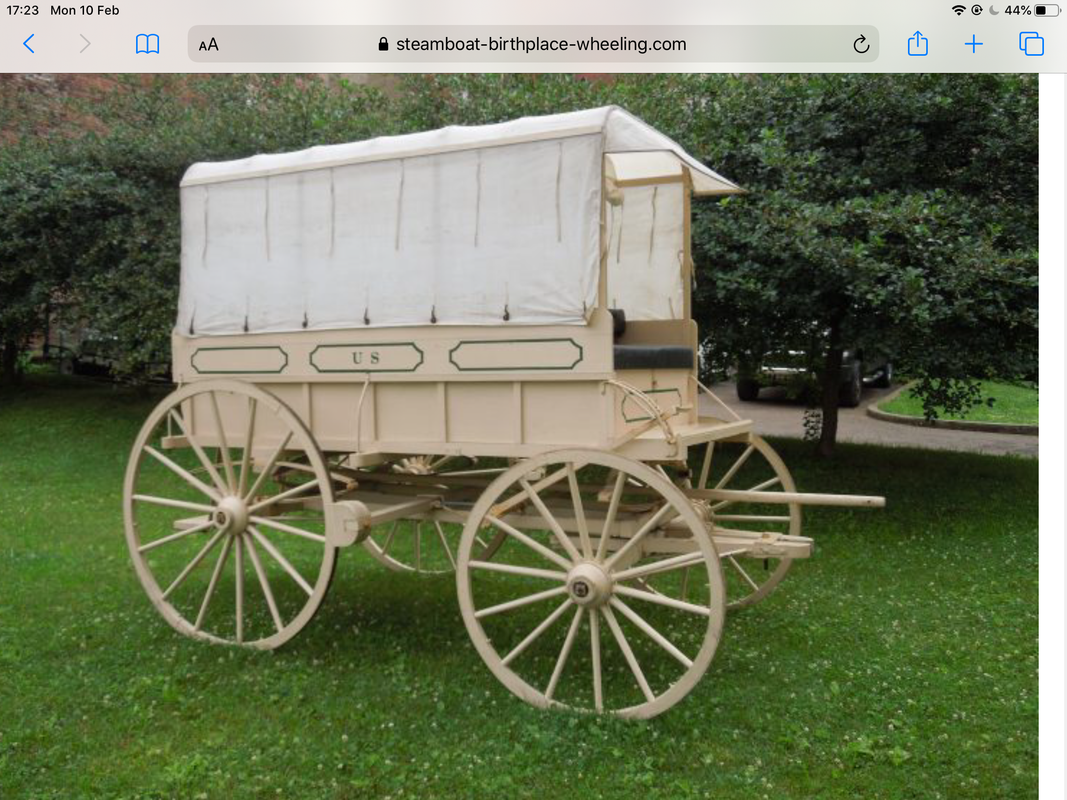 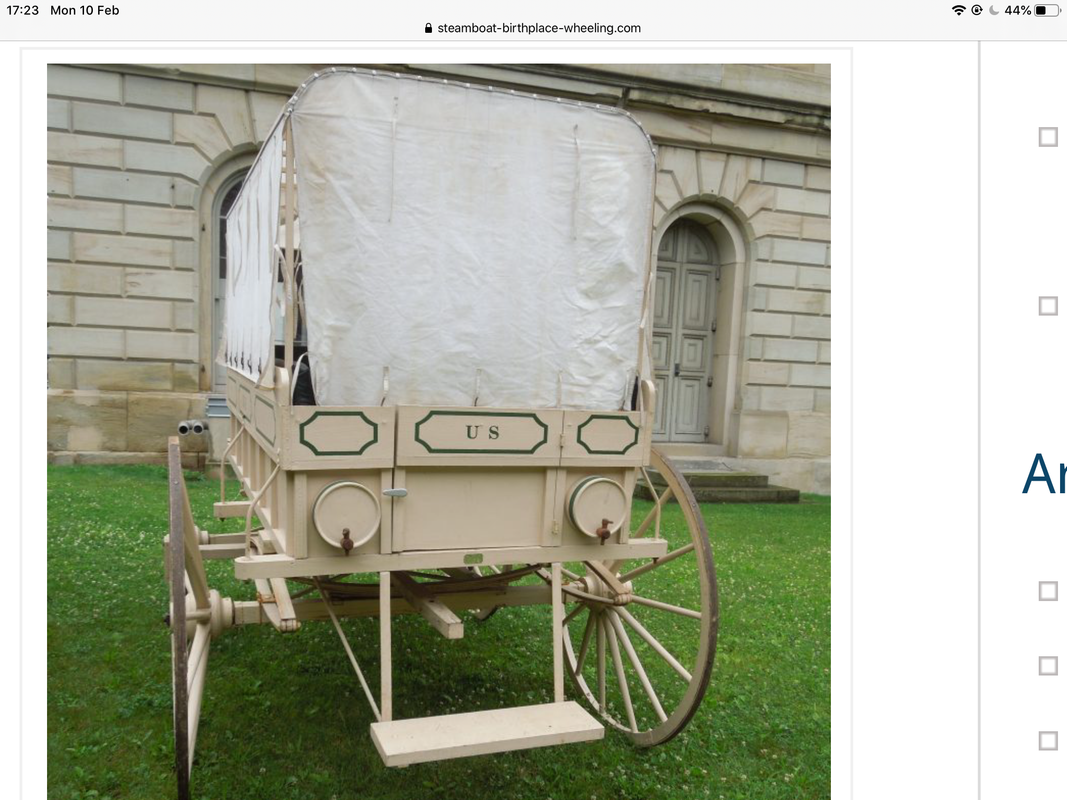 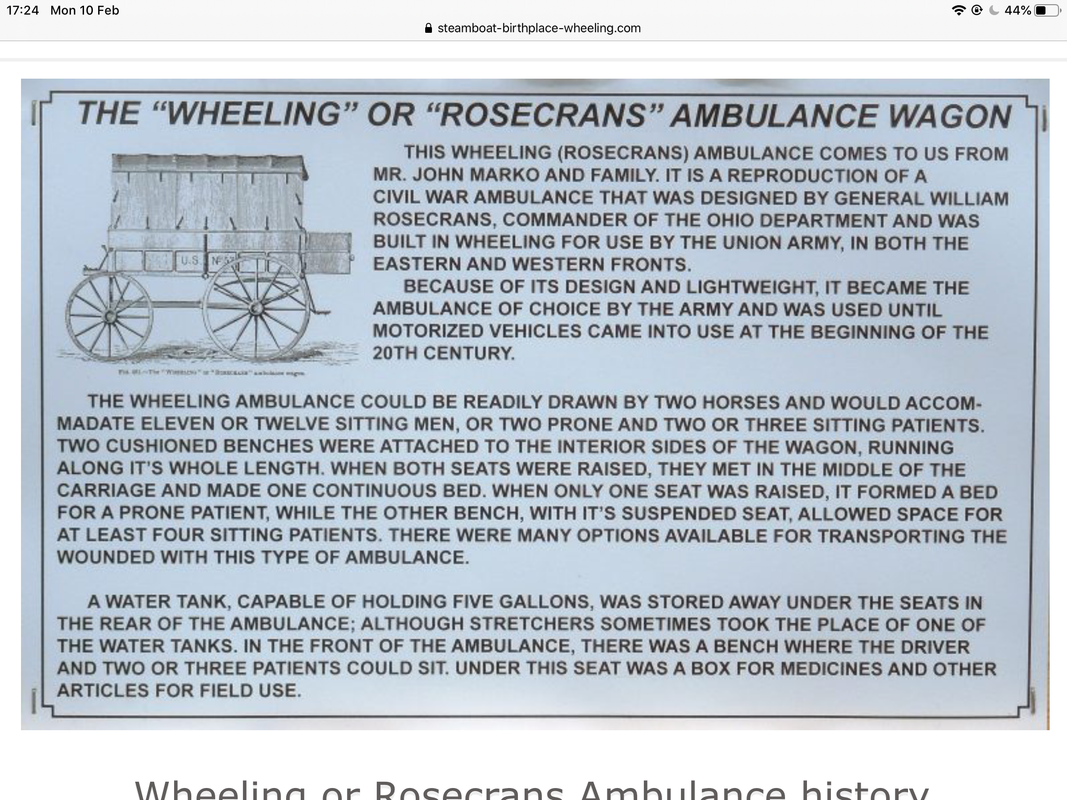 Following chopping I redesigned the suspension with card for the springs, balsa for the brake and riding board. 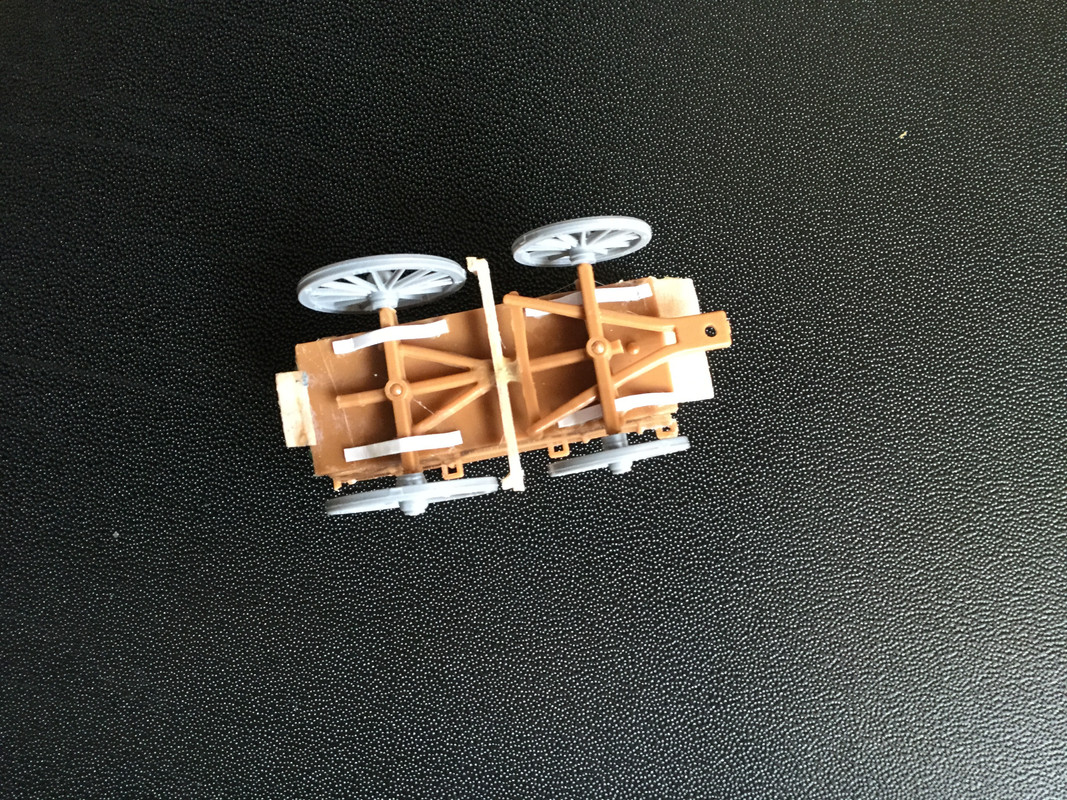 Piano wire and balsa made a step for the rear. 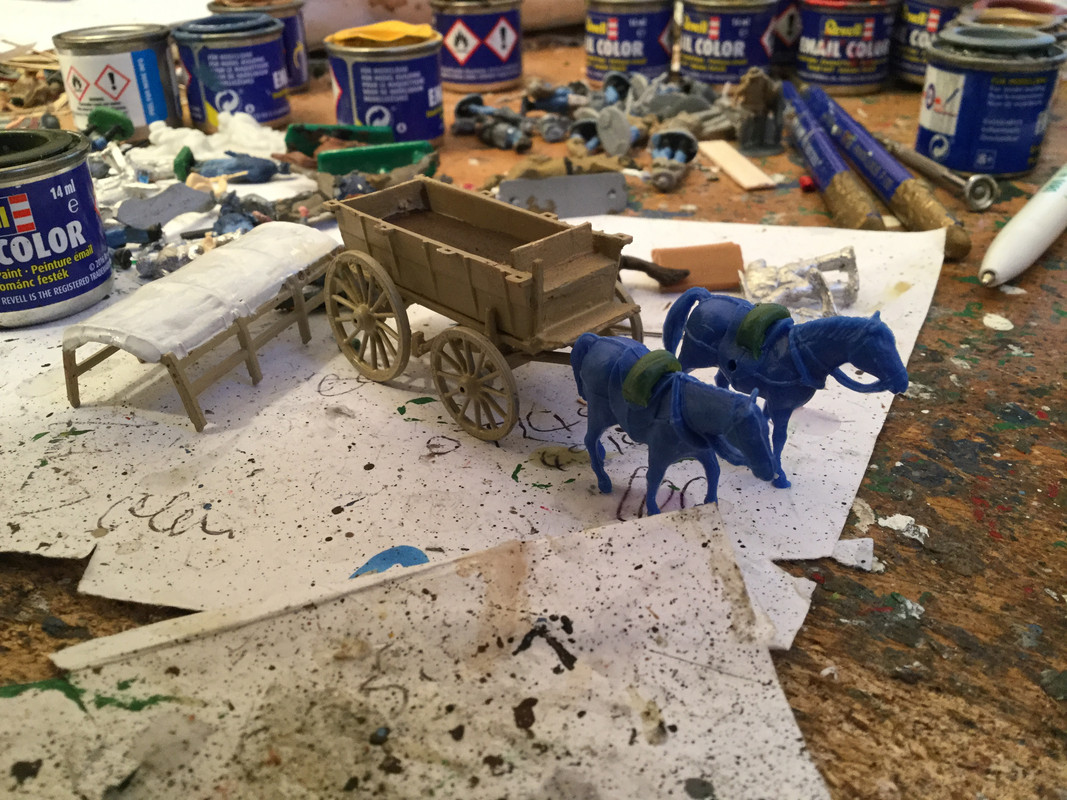 The horses are Revell with green stuff and Hat Austrian artillery chains.

The main pole is balsa again with some chain from the bits box.

The reins are cotton with a little PVA to stop the fraying. A special mention to Mr Crynns for that tip! 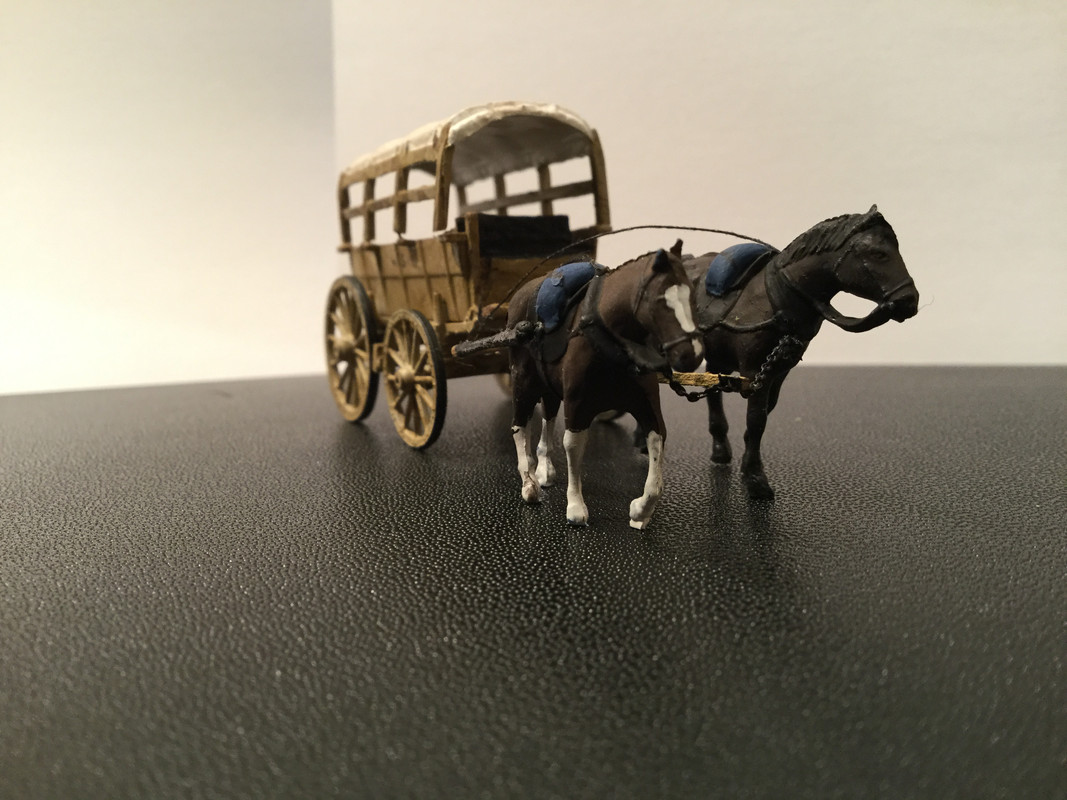 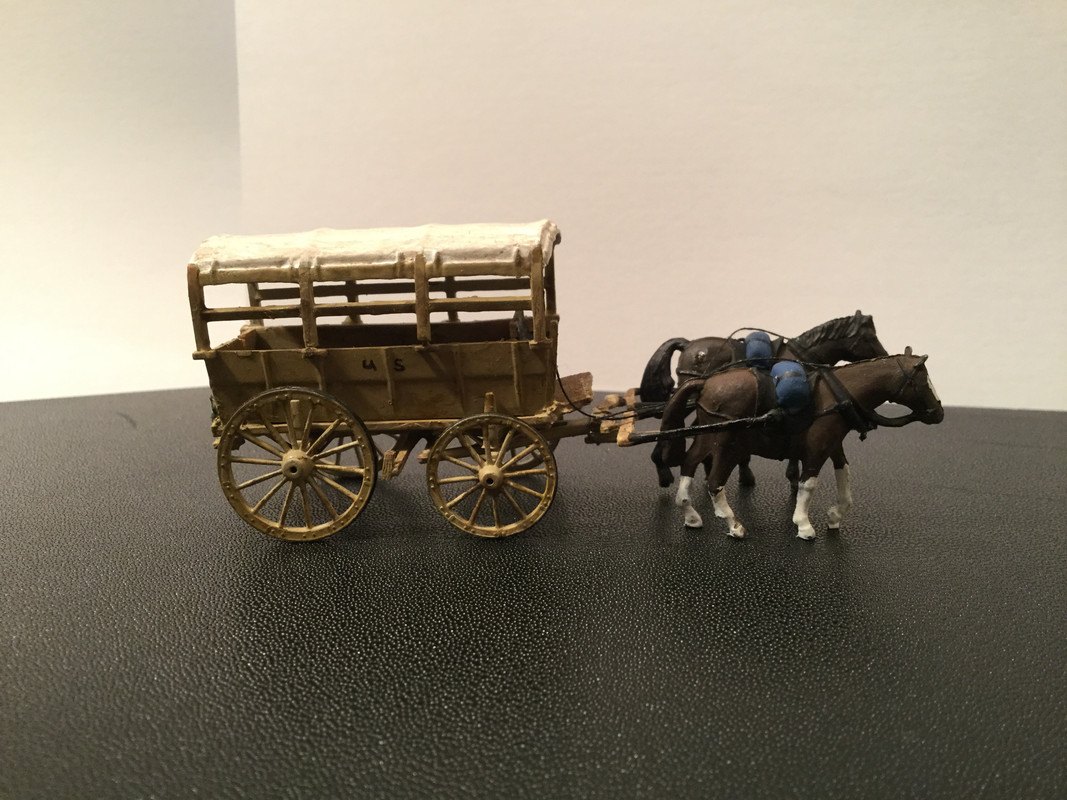 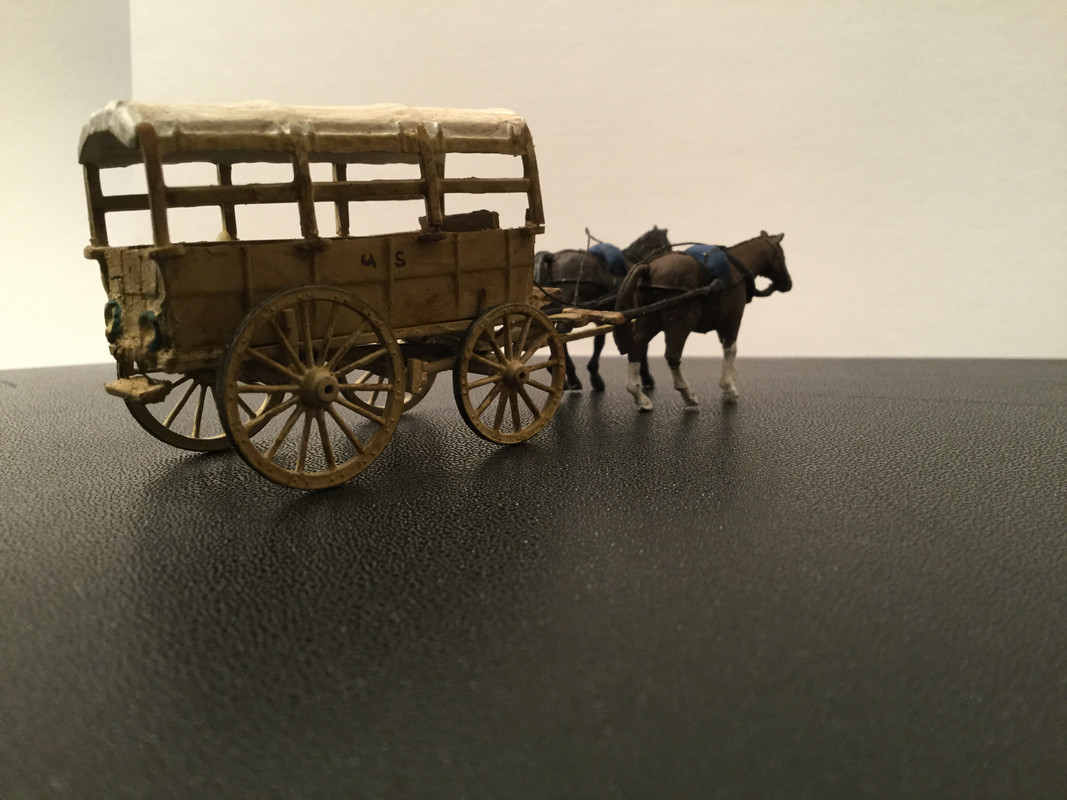 It’s not 100% accurate, but I think it gives a good ‘feel’ of the original and I have plans for it in the future.

Many thanks to Thomas again.

I have been building up and converting artillery for the Union forces.

The limbers are Revell and Imex suitably chopped.

I have used thin wire for the traces which here are loosely positioned.

The cassion is scratch built utilising a Revel limber and then adding a new running board and a balsa box. The handles are thin wire bent to position.

I had a few of the Hagen riders but it seems sadly that they are now discontinued. 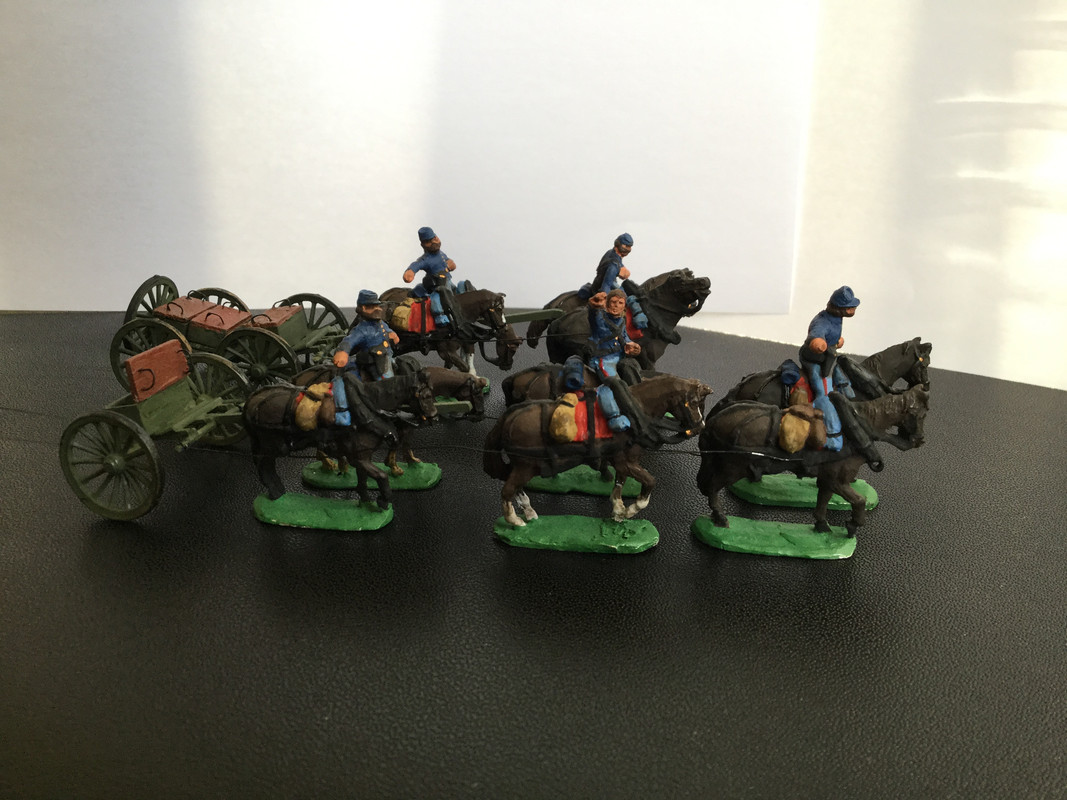 I have stolen a genius idea from Egbert and I hope he doesn't mind.

By photographing from the wonderful Gettysburg Companion by Mark Adkin and reducing it on a text file, I was able to print out the 12pdr cannon instructions that were pasted into the inside of the limber boxes.

How fantastic is that? 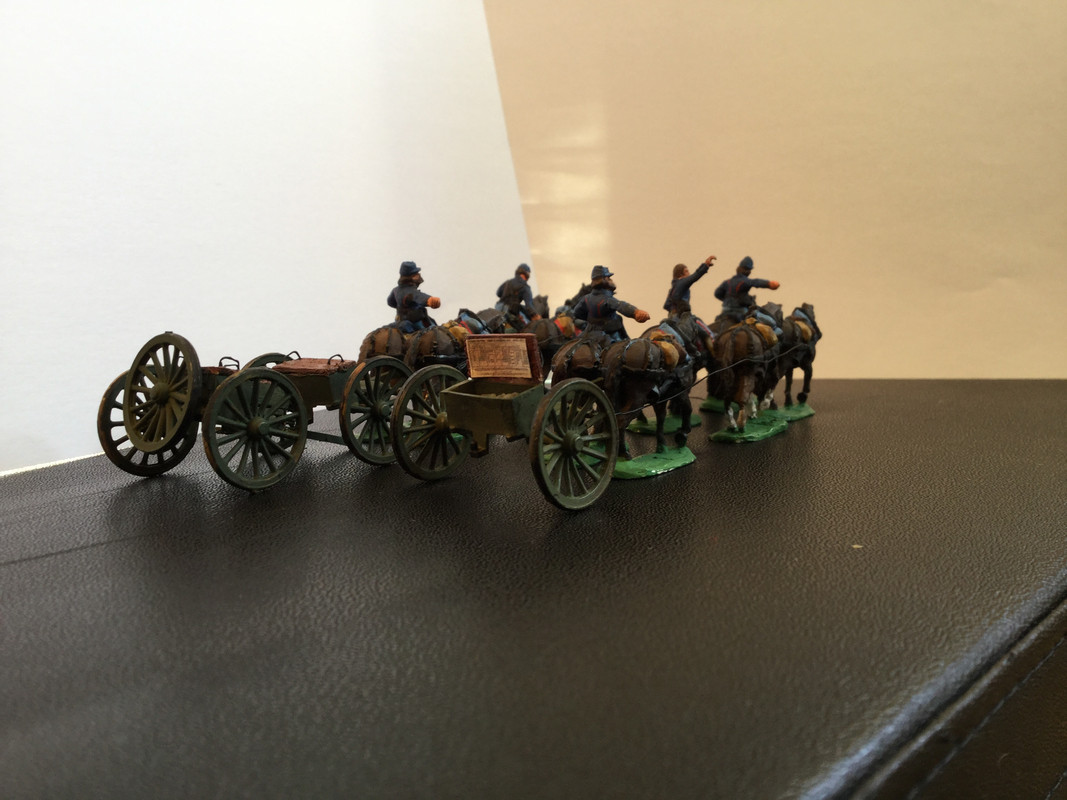 Once again, the camera has shown up a few bits that need tidying up.

Hey chris your artillery looks wonderful.
Nice idea to print out the cannon instructions
and paste them into the inside of the limber boxes.
LG Egbert