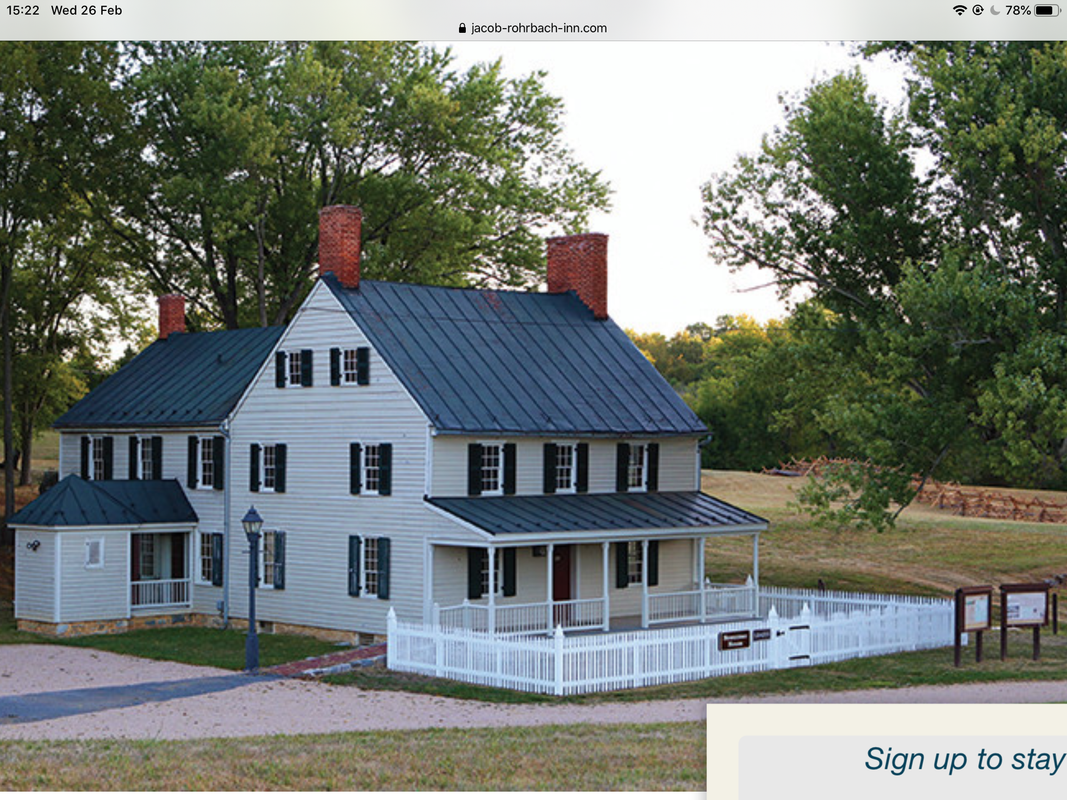 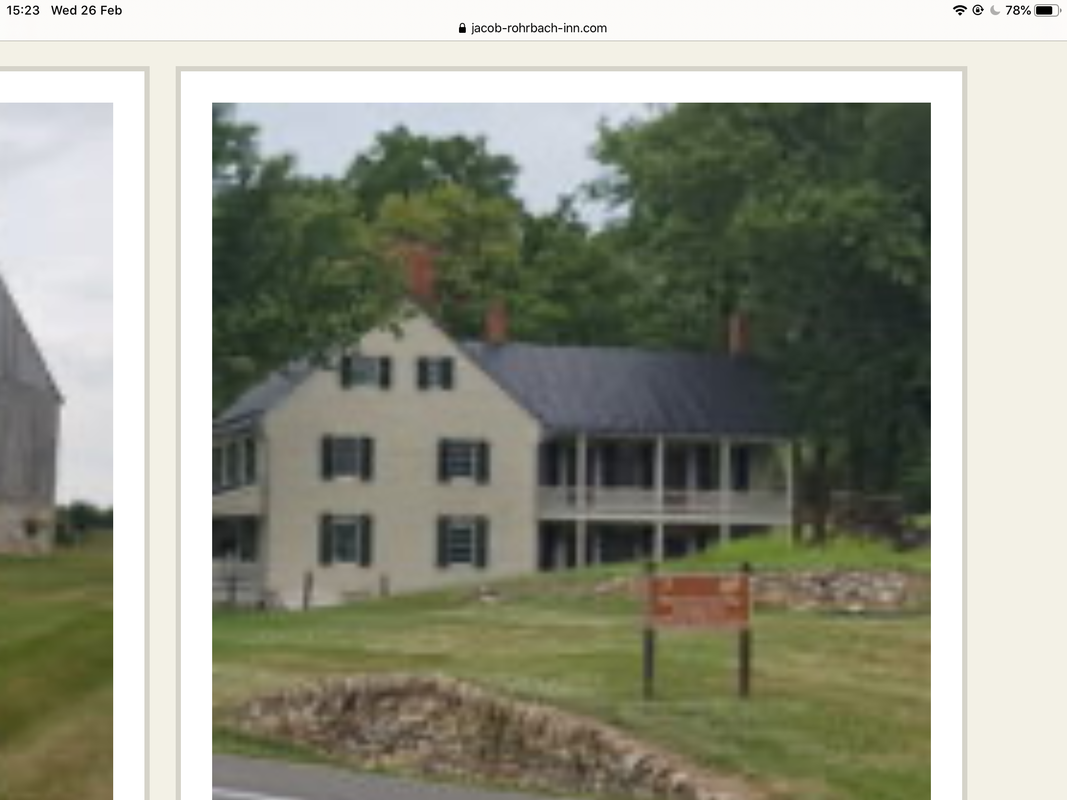 Located slightly west of the Orndorff ( middle ) bridge over the Antietam creek on the Boonsborough Pike, the building was originally built in the late 1780’s by Christian Orndorff 11. This picture shows the property on the left hand side looking towards the bridge. The heights were occupied by Union artillery. 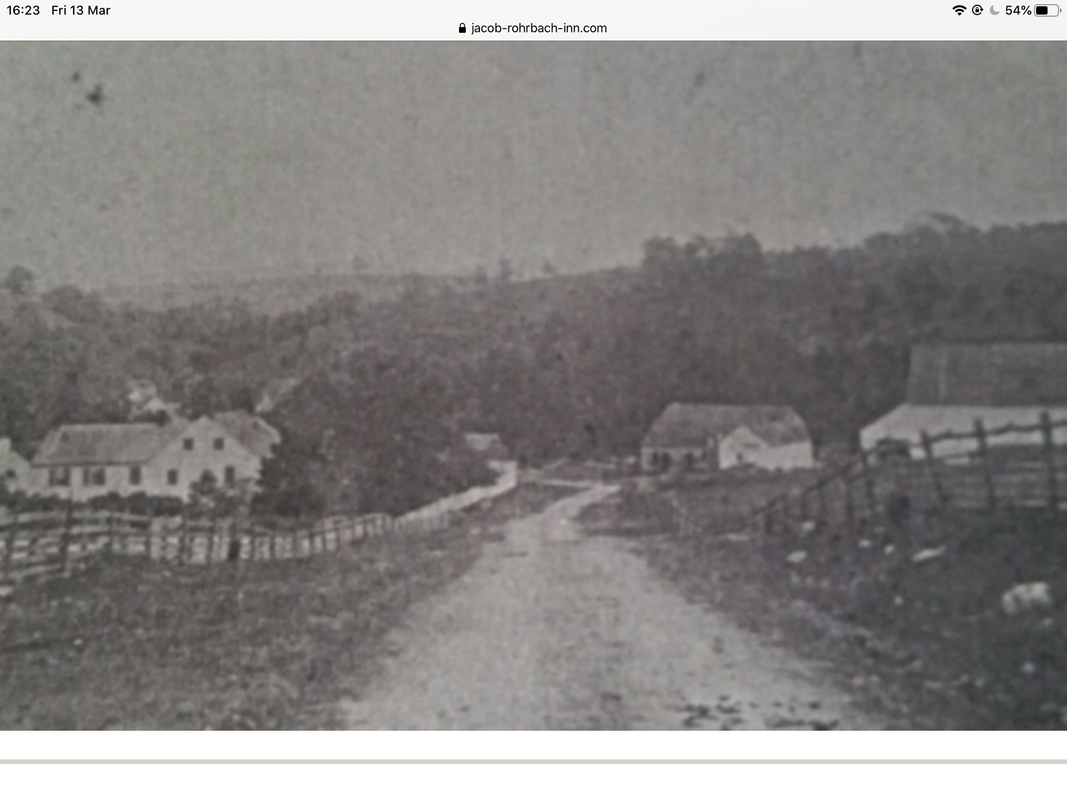 His father lived next door in a property that is no longer present. The creek, diverted through a race served as the power source for a grist and sawmill facility. 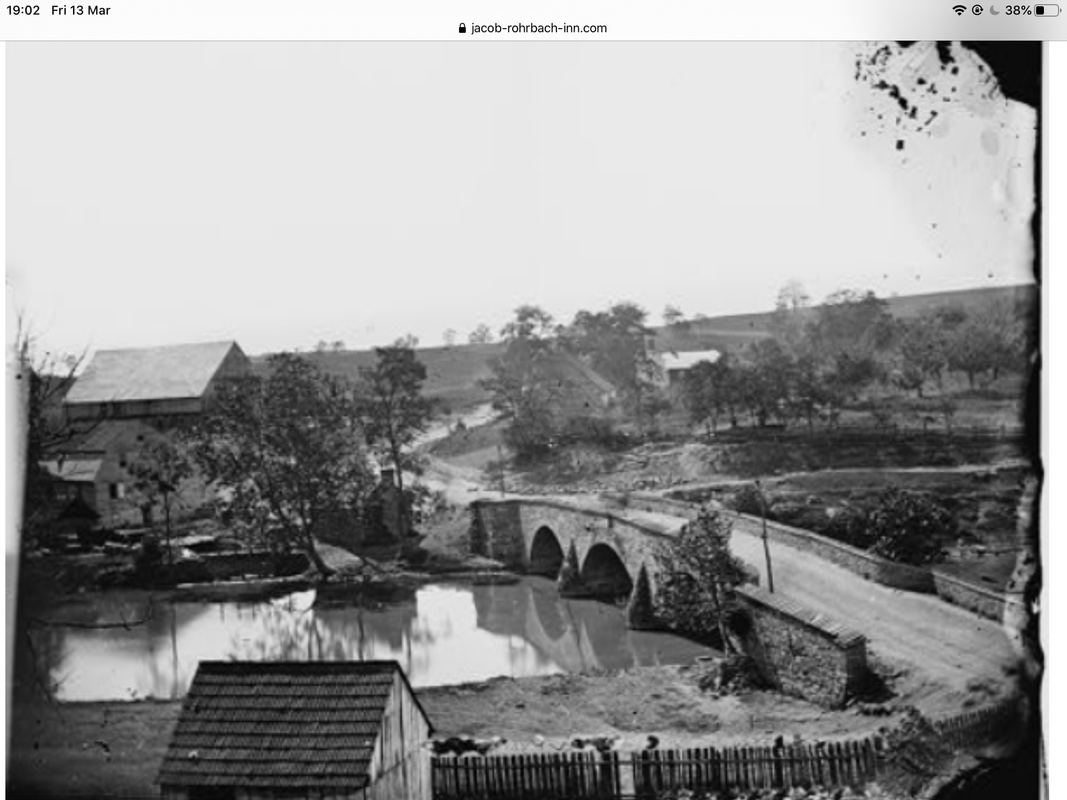 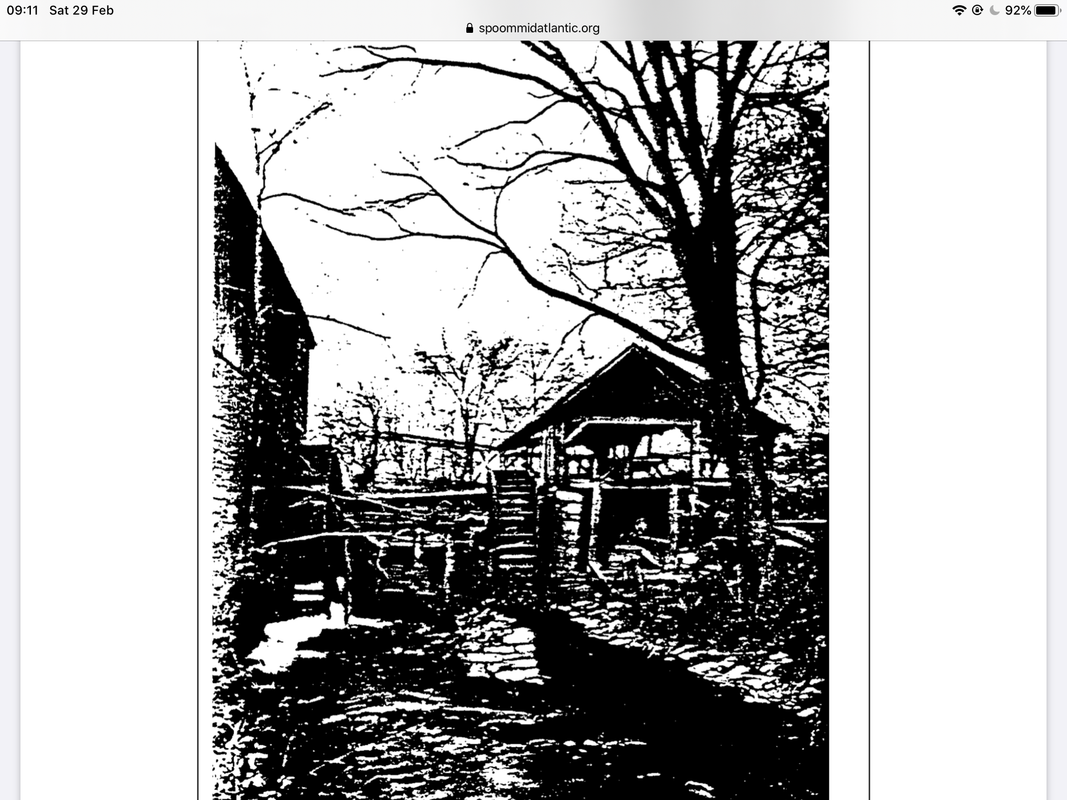 There was a large barn there too.

This view is of a long gone toll house looking down to the bridge from the Union side of the river with the barn in the distance. 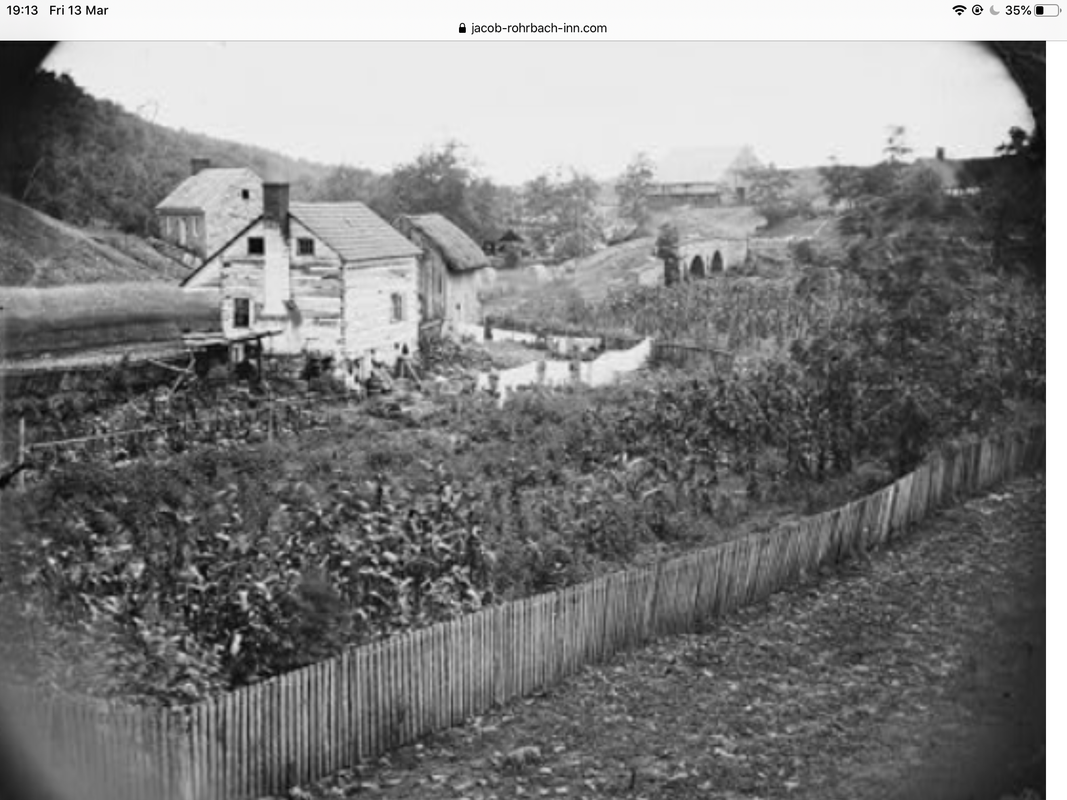 Following various owners the property was bought by Joshua Newcomer in 1853. The enterprise was very successful with the property being valued at $10,000 in 1860. A huge sum for those days.

In 1862 with the impending battle drawing near the family left the property for safety elsewhere. The damage afterwards was significant but because it was difficult to prove who had caused it he only received $145 from a claim of $3097.15! 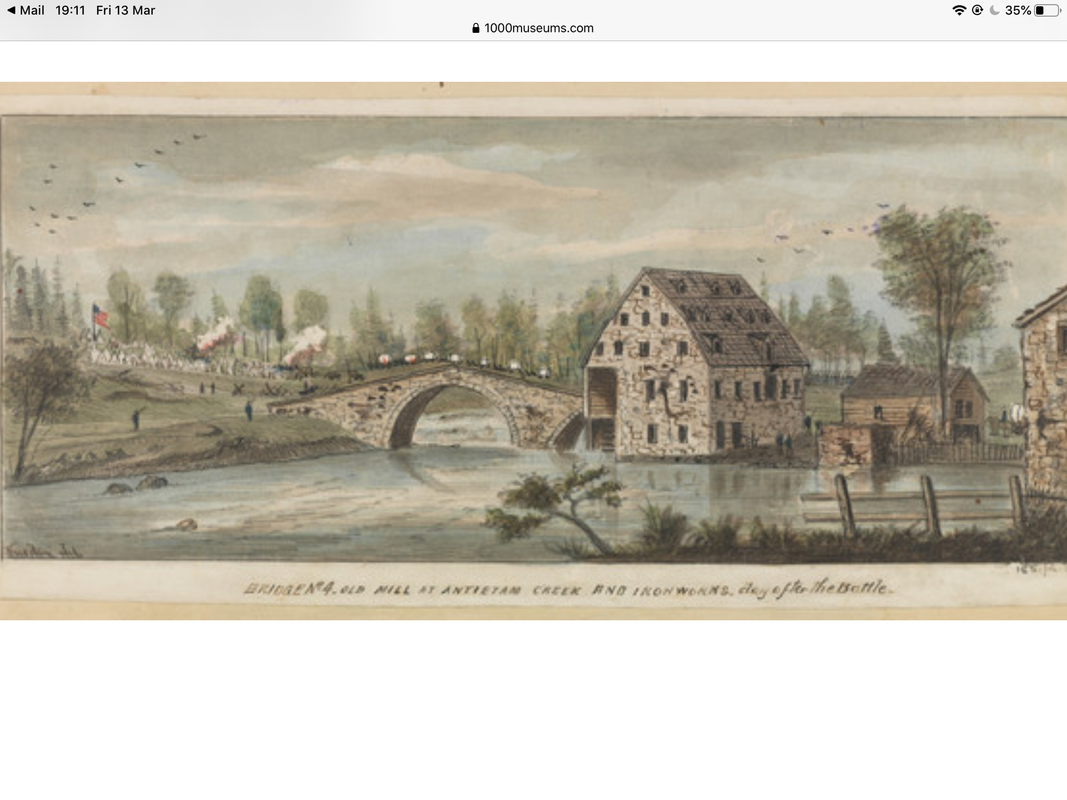 This, somewhat fanciful picture with a mill that looks nothing like Mr Gardeners picture taken just days after the battle was discovered by my wonderful wife, Der Feldmarschall.

This part of the battlefield saw limited action as McCellan, partly due to Pinkerton’s (of the agency fame) inflated Rebel strength reports and his own caution.

Reports suggested that McClellan thought Lee could mount a massive attack here ala Malvern Hill and hence the defensive nature of Fifth Corps on the 17th.

I felt that the bridge and house will tie the battlefield together as the Rohrbach bridge is a bit out on a limb otherwise. I will have a think about the mill or barn depending on footprint later. 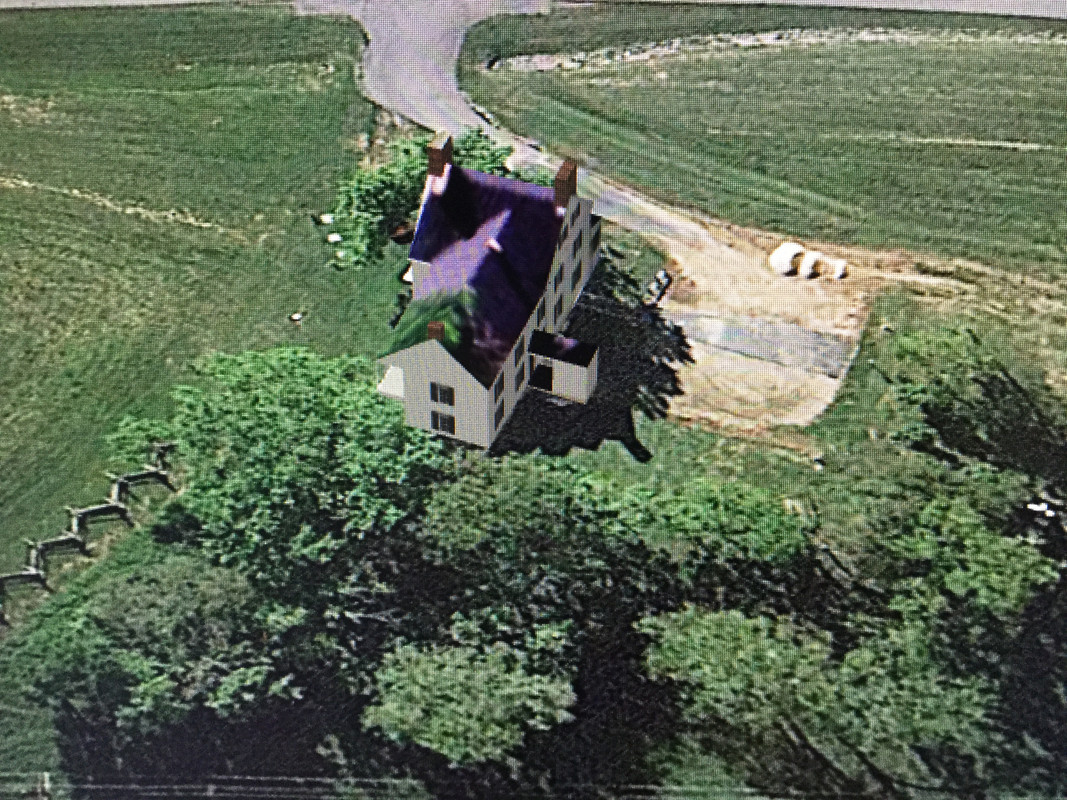 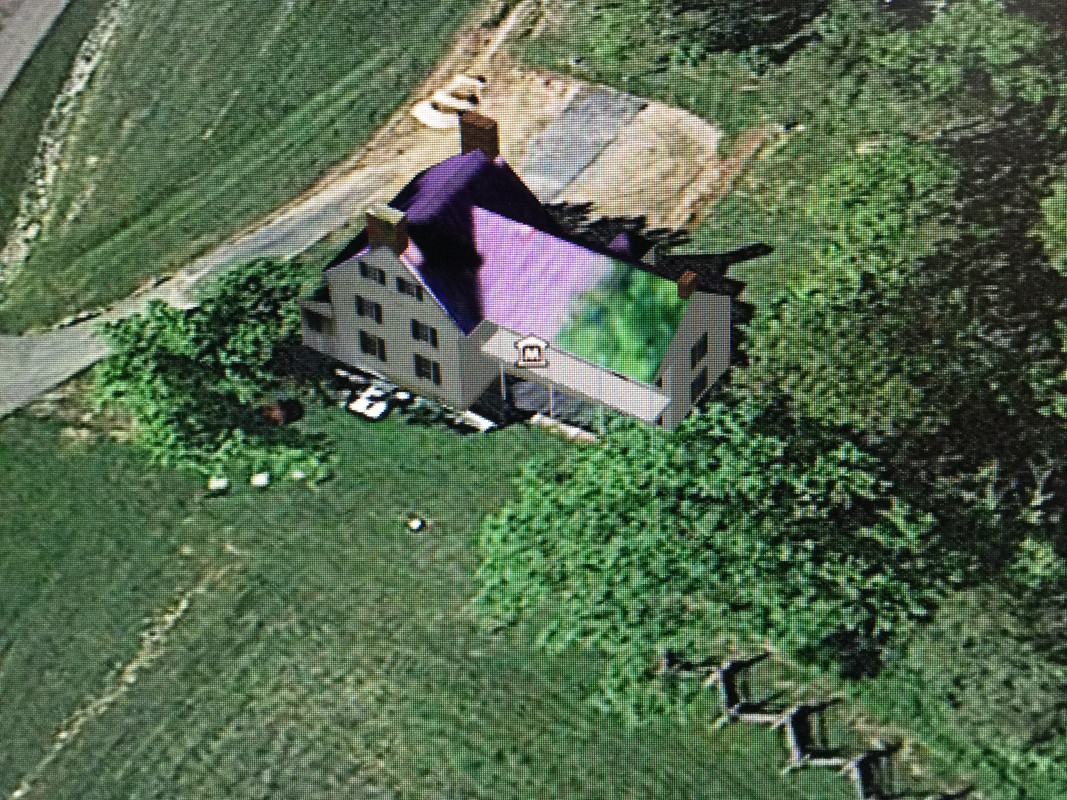 I have decided to alter the rear slightly regarding the amount of windows as I do not want an office block.

The present property has shutters. Although the 1862 pictures do not look like shutters are present I wonder if they are closed giving the impression of not being there. 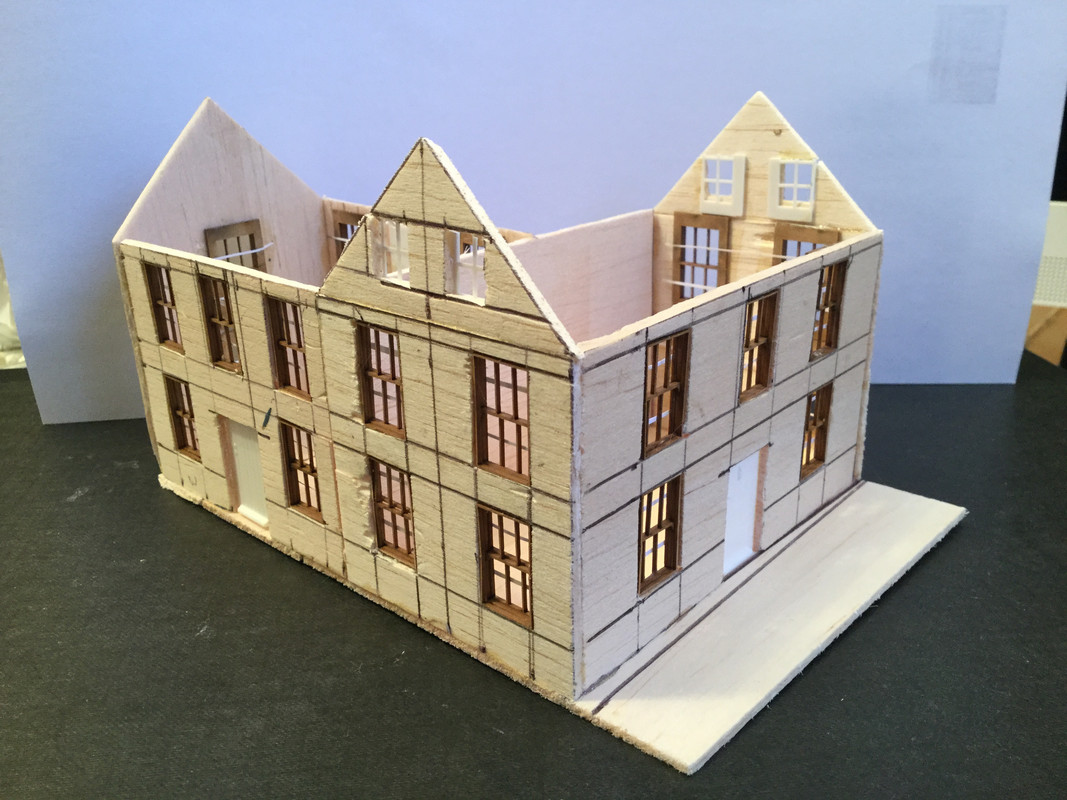 I will take a view nearer to completion. 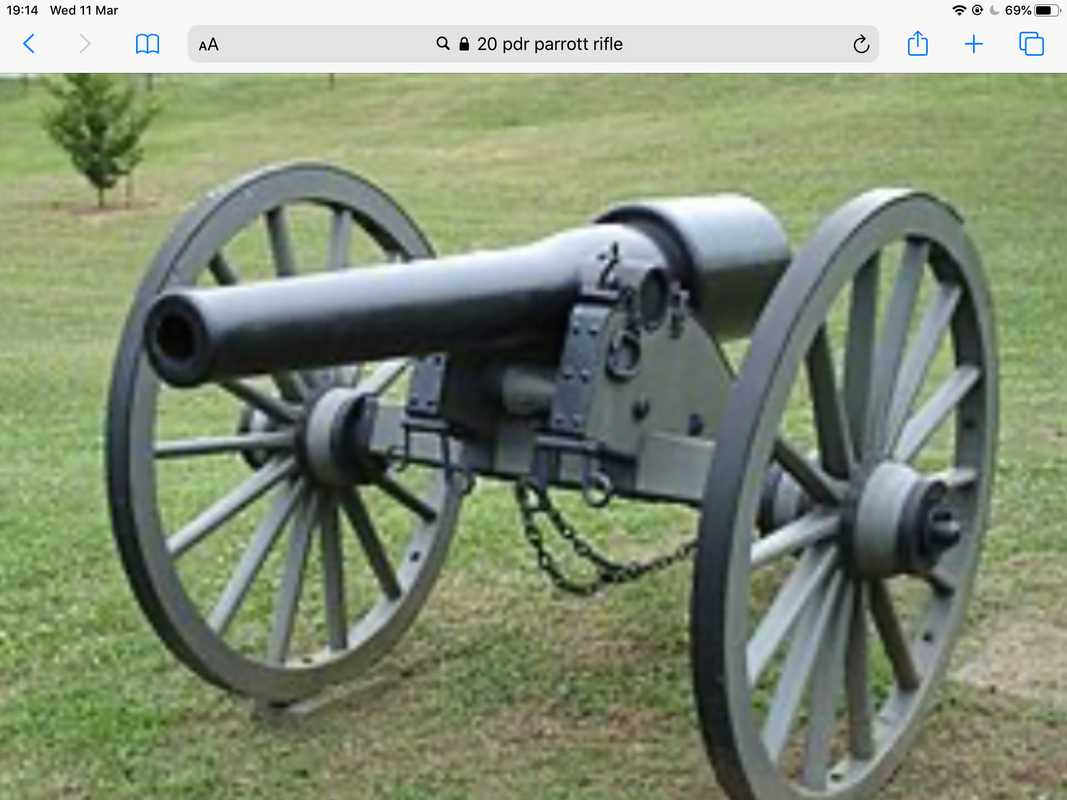 These weapons were deployed as long range artillery, principally on the heights above the Antietam creek.

The cannon was not well regarded being described as too light for siege work and too heavy for field work, not a good recommendation.

Despite being supplied with the best fuses the piece was described as inaccurate with a propensity to burst just before the breech band. 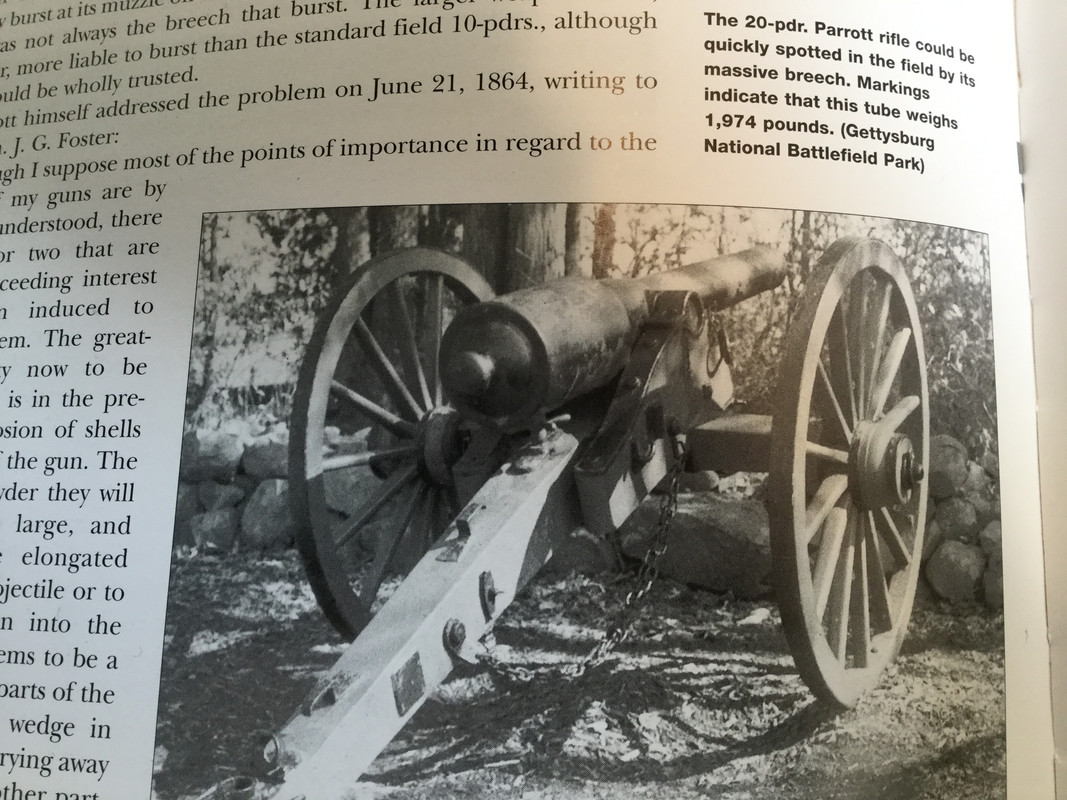 Indeed the concerns led to the replacement of these pieces after Antietam in the Army of the Potomac by 3inch ordnance rifles and 10Pdr Parrotts.

I initially was going to get some of the lovely Speria 30Pdr pieces to use for the refight.

Unfortunately however the tube is massive and the carriage totally different from its 20Pdr cousin.

I looked upon the Revell British Artillery pieces and decided that with a bit of chopping they would provide a good carriage. 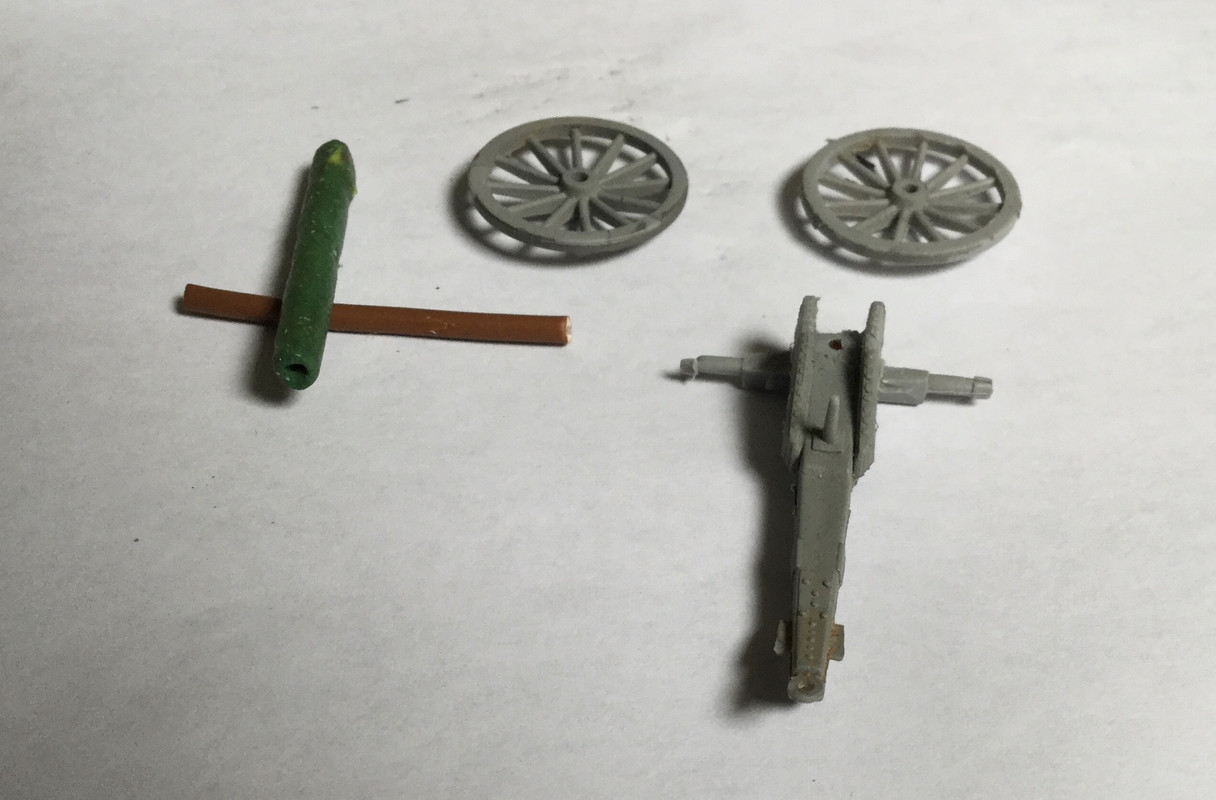 The tube is a piece of wire with greenstuff applied around it, hollowed at the end and left to dry. The breech and cascable are then added with a touch hole.

The rope is cotton wound around a former and added along with the chain.

I need to build the trunnions and clean up the tube before painting but the result is pleasing so far. 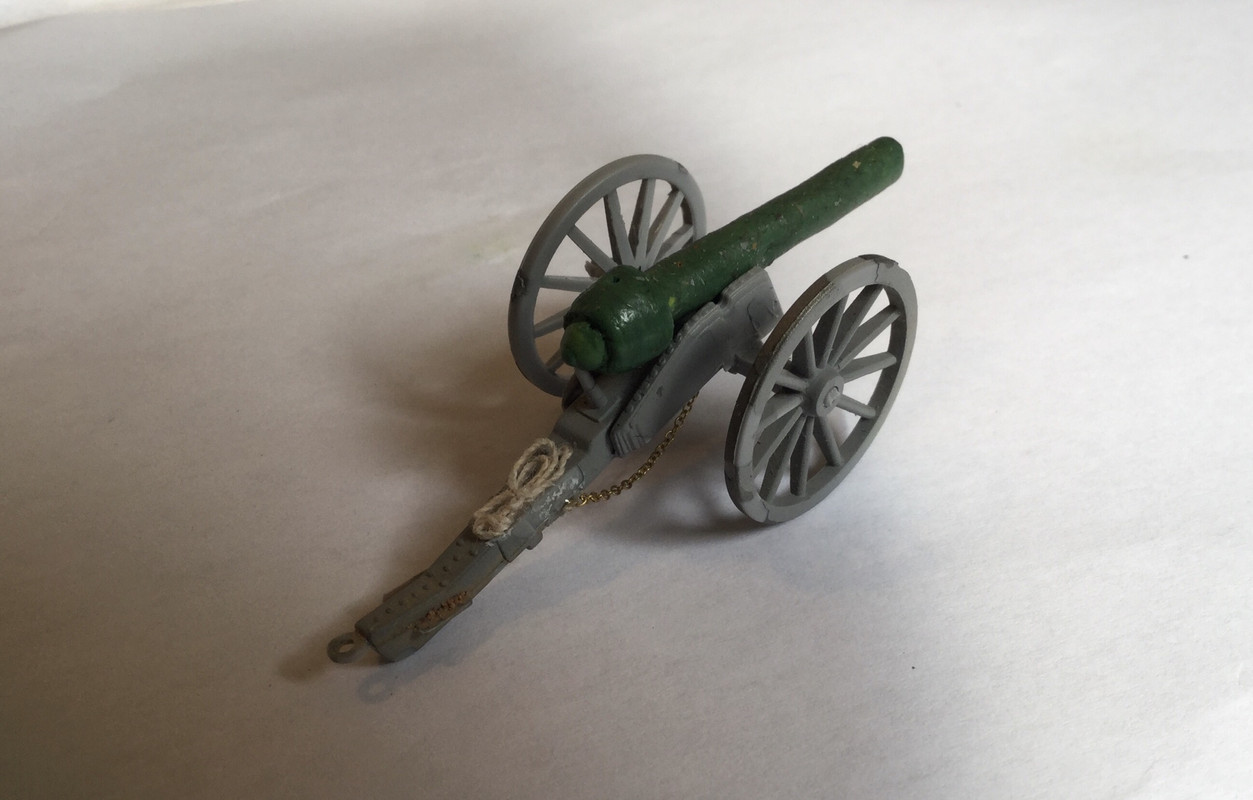 I built up the trunnions with Greenstuff and following fitting, topped them with tissue paper brackets.

The elevating handle was made by twisting some picture wire into a bow, placing over the cut down plastic spike, pulling tight and then cutting the ends to size.

The end result, whilst not a 100 % is to my mind quite pleasing. 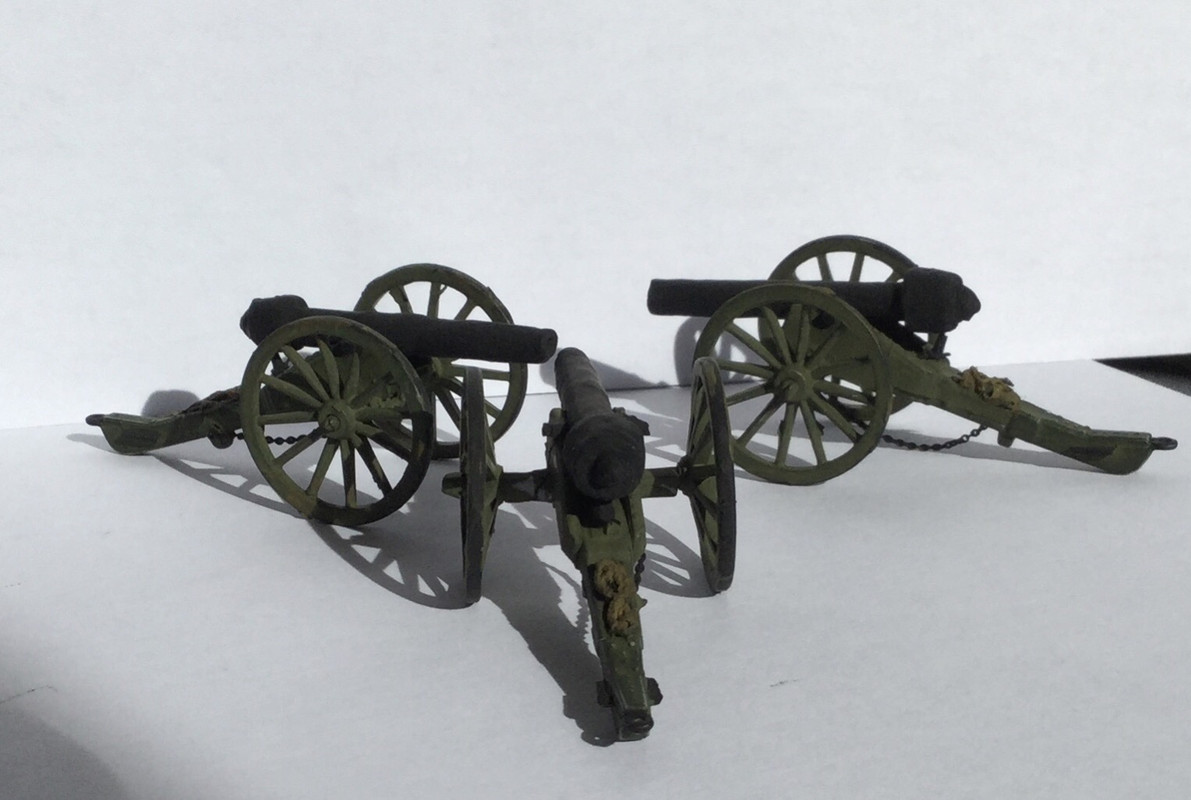 I have built up three cannon as my Union batteries will comprise of three pieces, whilst the Confederates will be two.

Incidentally I found this wonderful picture of PART of a Union battery. 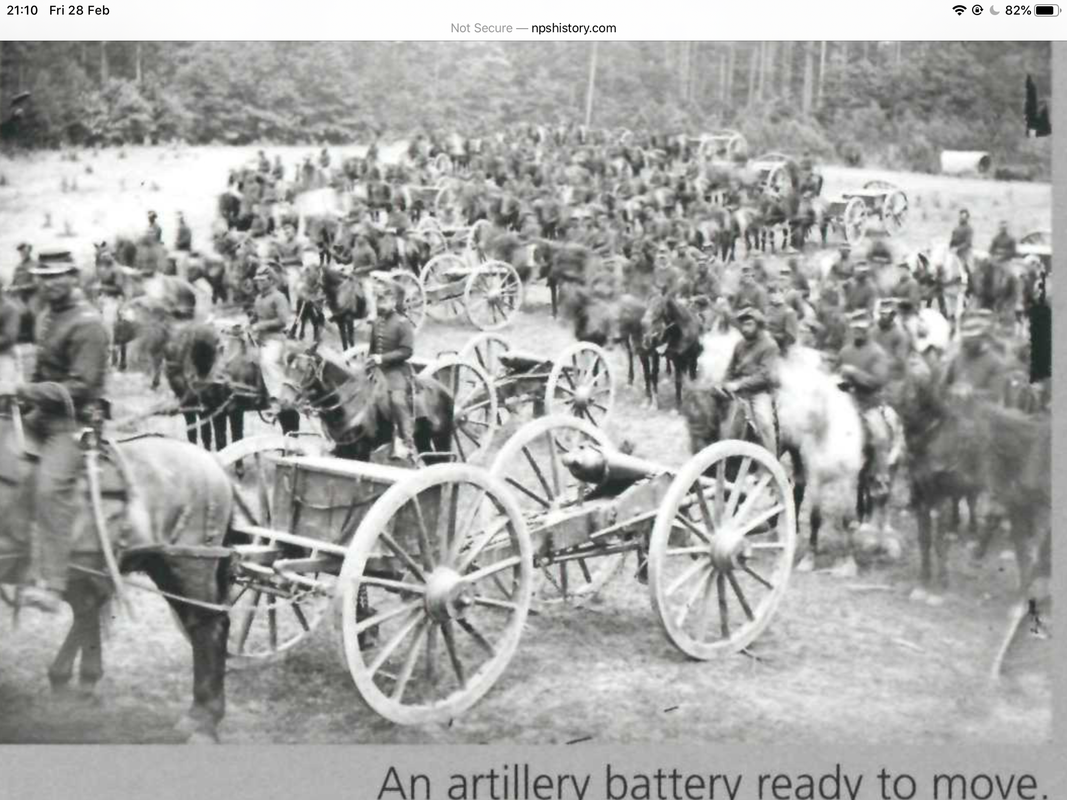 It makes you realise how much space these guys took up in real life as against the usual war gaming interpretation.

The recent Stretlets ACW releases have some lovely individual poses that readily lend themselves to chopping.

Also, swapping bits of Imex and Revell can be rewarding.

Mounting Stretlets tops on Italieri US and CSA cavalry has given some extra poses for the Divisional staff. 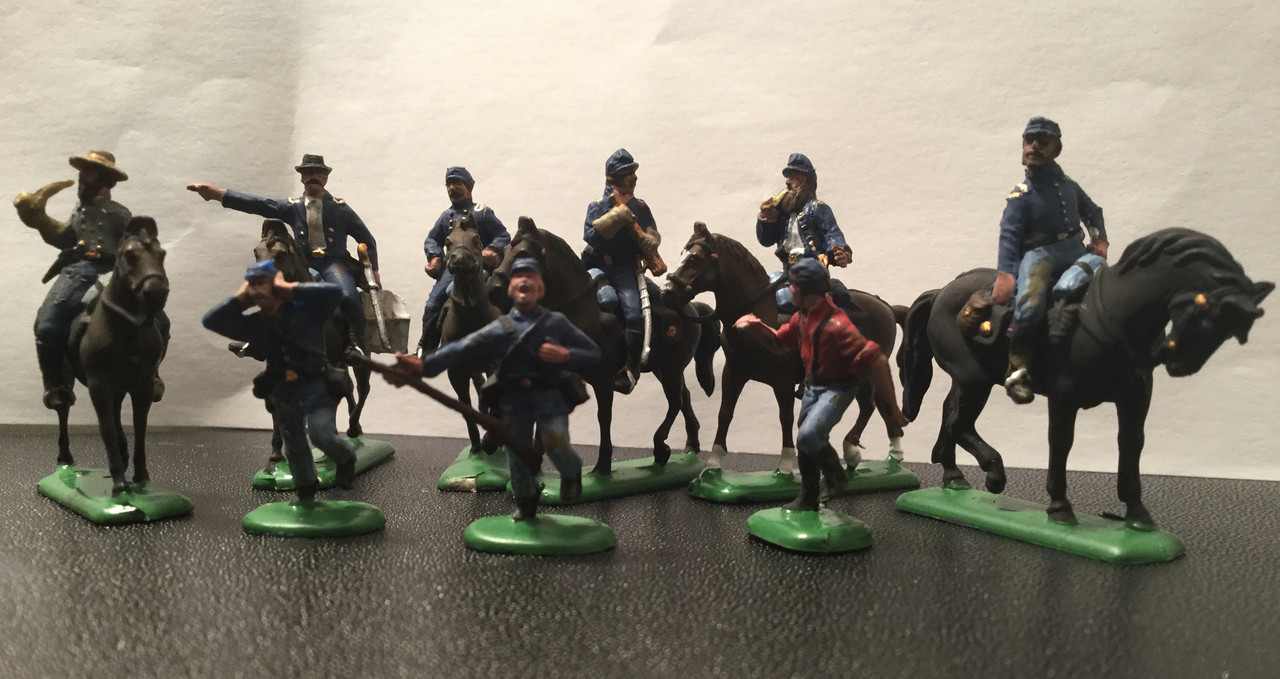 I have completed the edifice and whilst removing the porch I think it has the ‘feel’ of the original.

Upon reflection it, because of the shutters is a little larger than I would have liked and as a result it’s footprint is exaggerated.

I will construct the bridge and take a view as to the other structures in the pictures. A shame, but as stated before the size and wealth on display for 1862 is staggering. 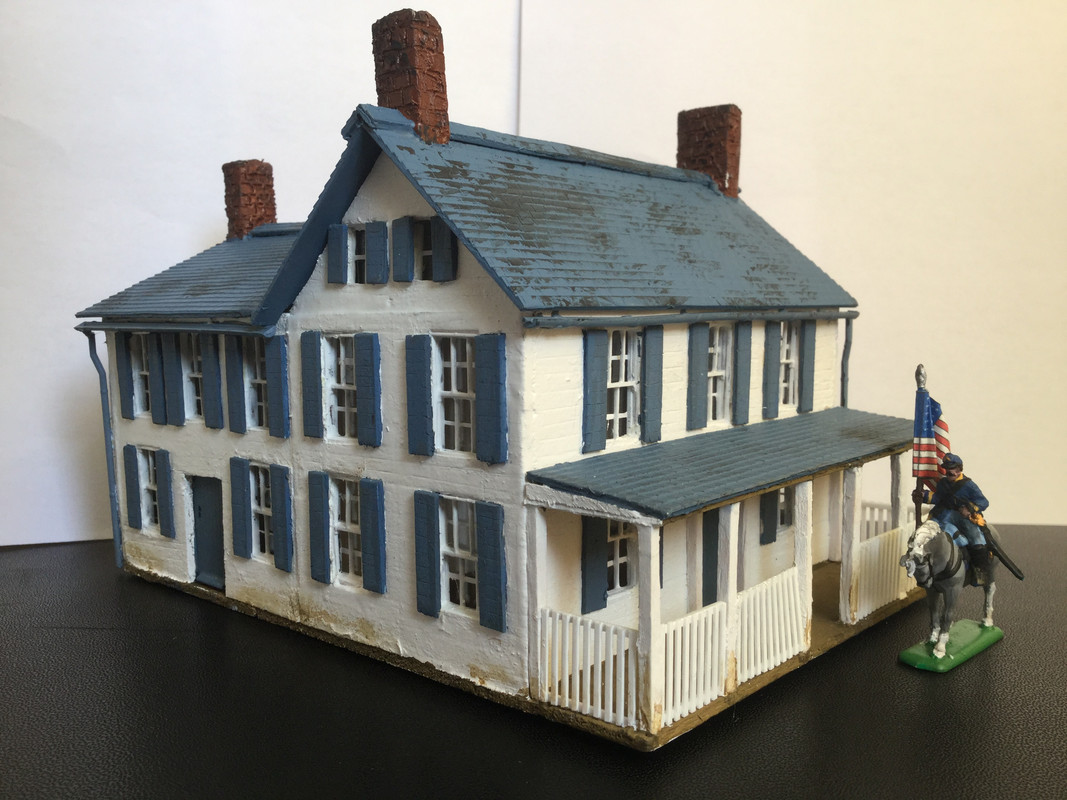 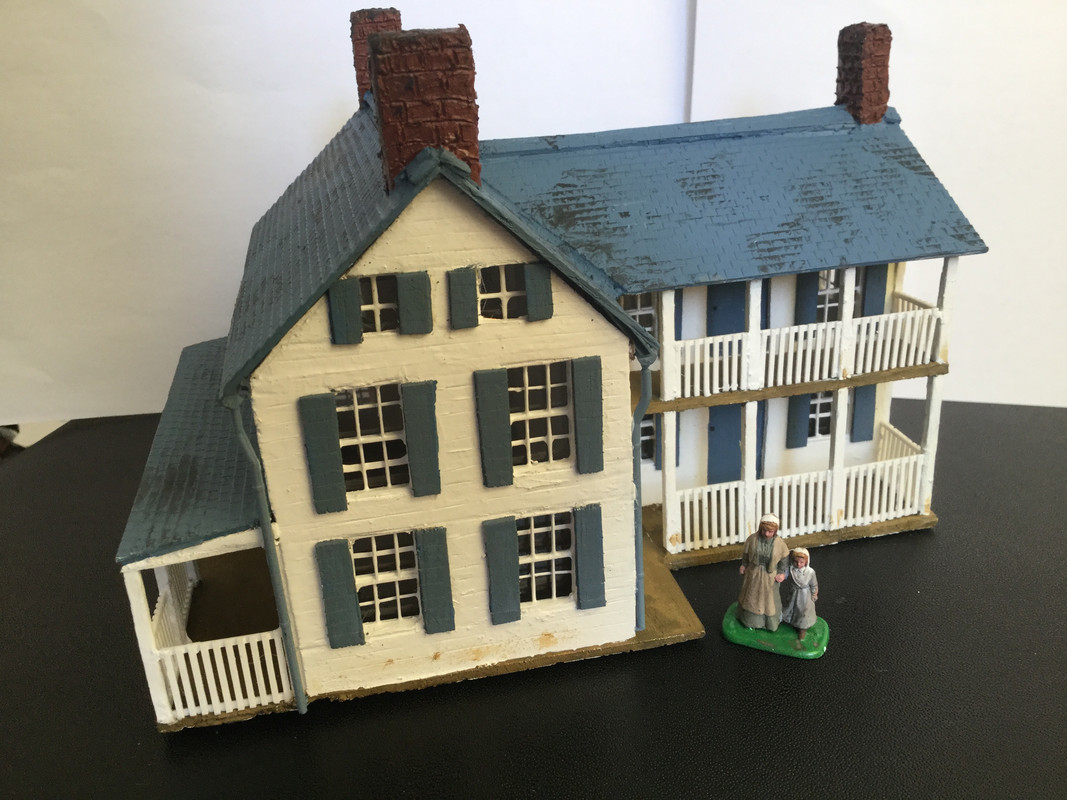 The girls are being nosey again.

Located on the Boonsborough pike east of Sharpsburg, crossing the Antietam creek the bridge was built in 1824 by a Silas Harry, replacing a previous wooden structure as part of the ‘Turnpike boom ‘ bringing further prosperity to the region.

The construction was stone and the structure lasted until it was replaced by an iron bridge following the ‘ Johnstown flood’ of 1889.

The bridge was witness to the Confederate retreat from South Mountain as well as a limited foray by the Union forces on the 17th.

These pictures were taken by Alexander Gardner after the battle. Along with the Newcomer pictures it is noticeable that the terrain is very undulating. 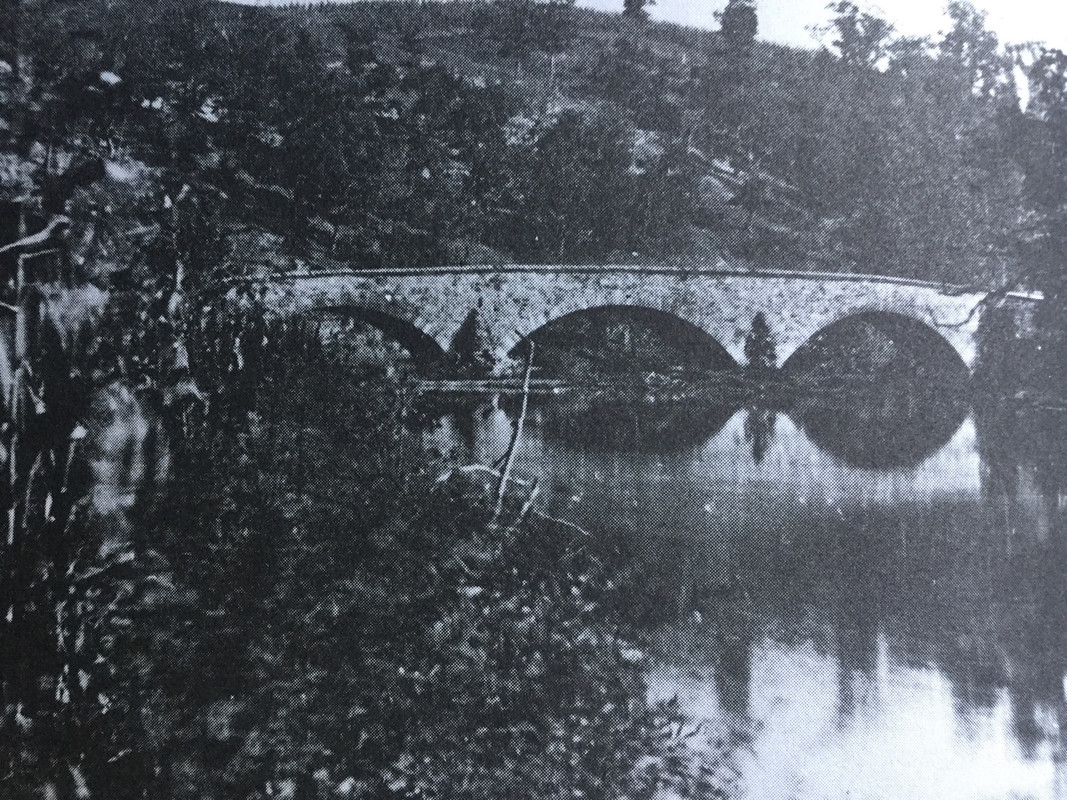 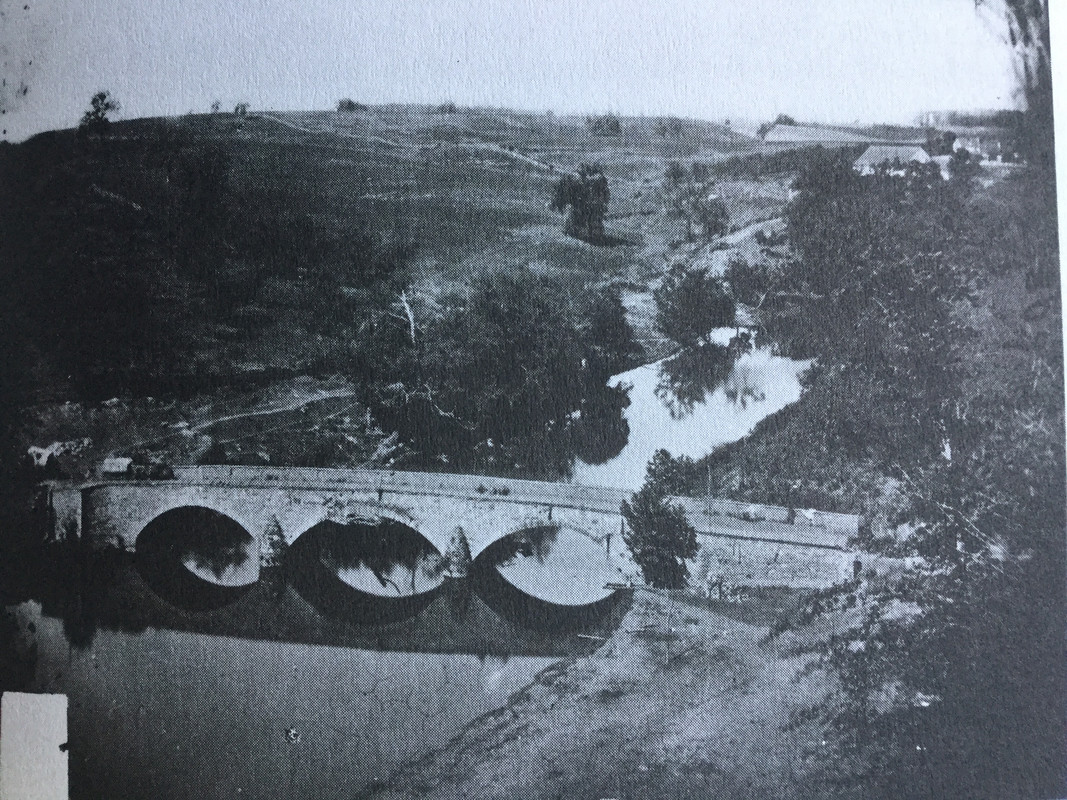 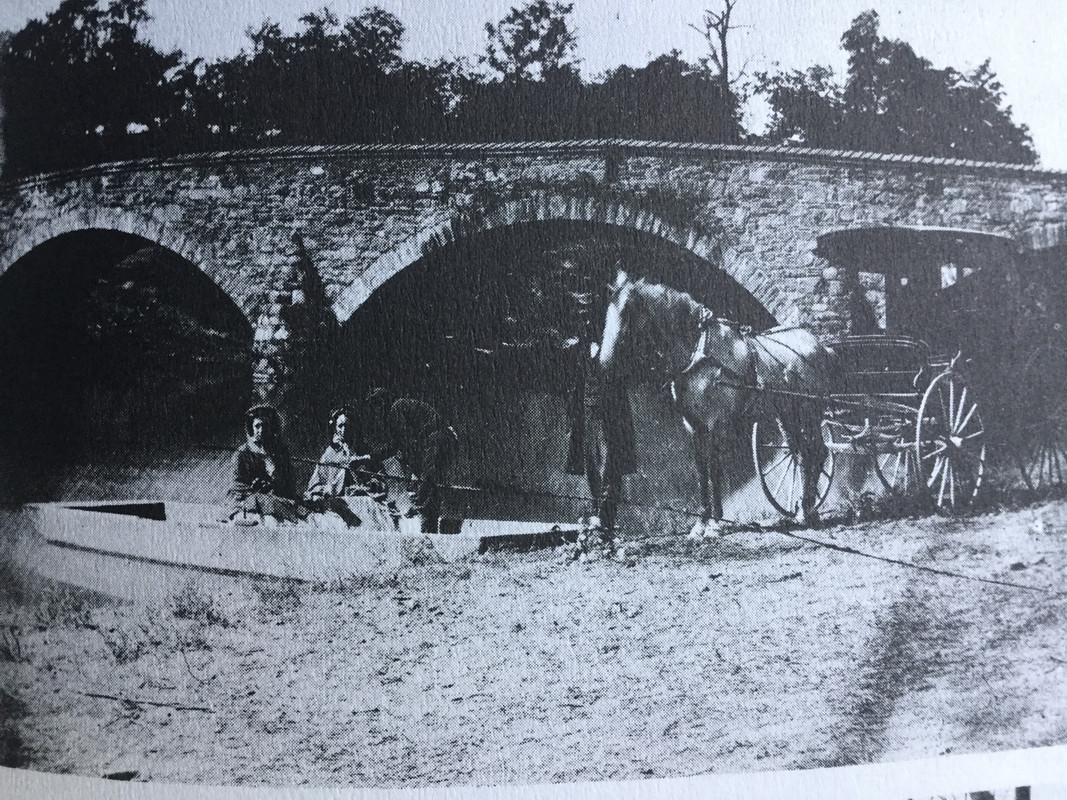 The ladies having a picnic must have had stout noses as the field would not have been cleared completely only five days after the action.

To my mind apart from the entrance and exit the bridge is very similar to the Rhorbach ( Burnside) bridge.

I therefore used a duplicate cardboard centre section that I retained from the previous build.

On this occasion rather than use decorators caulk I tried DAS air drying clay.

Personally it is not for me. The stuff cracks as it drys, warps the cardboard and I had to start again with decorators caulk which I find to be a friendlier medium.

The bridge was built up as per the Rhorbach project and the ‘wings’ have been added. 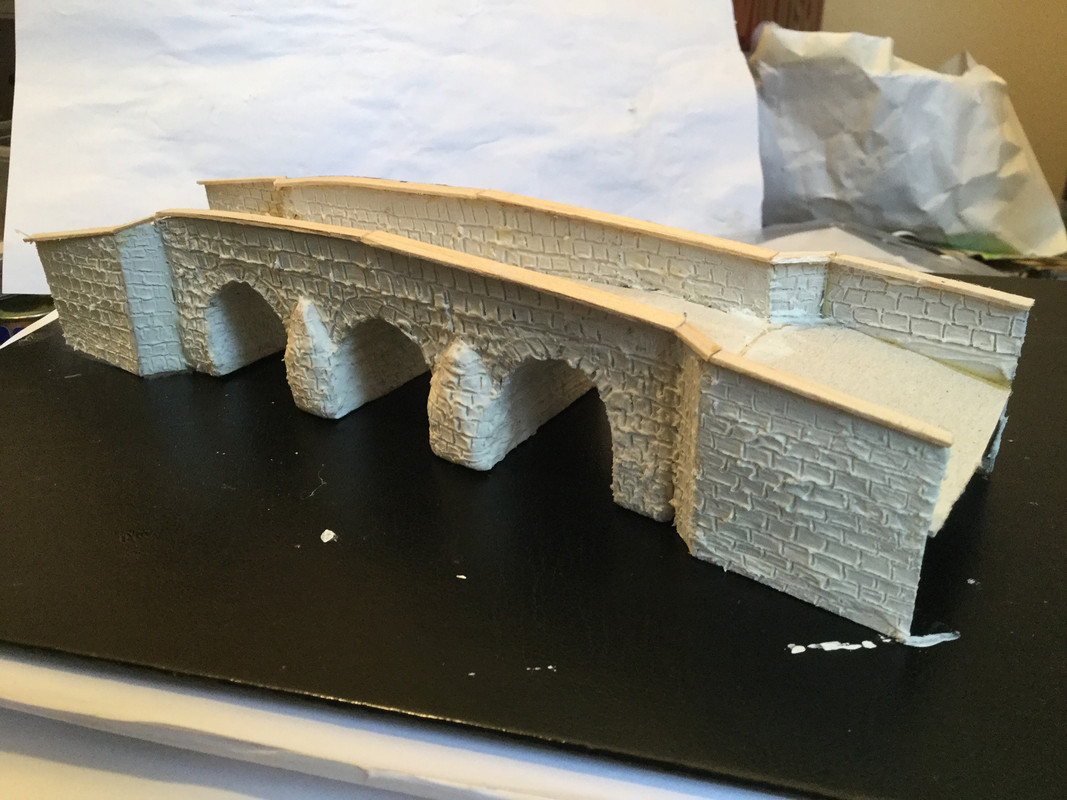